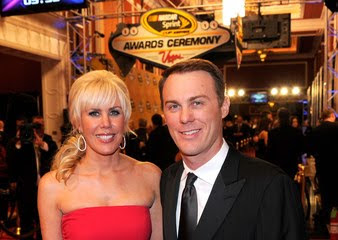 Been a wild week with NASCAR TV starting up, the preview in Charlotte and now the NASCAR Media Tour underway. Here are some tidbits from the week to date:

SPEED veteran Elliott Sadler will enter the Daytona 500 in an RCR car sponsored by General Mills and Kroger Food Stores. Sadler will race the #33 RCR car that is locked in from points last year. Gil Martin will be the crew chief. We haven't seen Sadler on RaceHub yet this season. He normally appeared on Mondays to review the Sprint Cup Series races. In the past he also appeared on Trackside.

The media buzz on Thursday will no doubt be the announcement during the NASCAR Media Tour stop at RCR that Kevin and DeLana Harvick are expecting a baby. That puts a spin on the KHI story and it will be fun to see how the NASCAR media connect the dots on that one.

Steve Byrnes dropped the Sadler news at the tail end of RaceHub and there was a good reason why. SPEED is pushing for the Tuesday through Thursday shows to be live. They will certainly include some same-day recorded material, but having Byrnes live in the studio adds a solid touch for news.

As many of us have suggested, either moving the show to 7PM ET or replaying it in this timeslot will solve a problem for those not yet home at 6PM and unable to record the episodes. RaceHub does not repeat right now until 2AM ET/11PM Pacific.

Last season NASCAR got blasted when the media discovered and then reported that several drivers had been secretly fined for things they posted on Twitter. As part of a social media overhaul, NASCAR Vice President Steve O'Donnell disclosed that there will no longer by any secret fines.

"NASCAR will no longer issue fines that are undisclosed," he said. "We looked at this issue from every angle and gathered feedback from the industry. While there are always sensitivities related to sponsor relationships and other leagues may continue issuing disclosed and undisclosed fines, NASCAR has decided that all fines moving forward will be made public after the competitor or organization that has been penalized has been informed."

Pockrass later updated the information to say that ESPN subscribers would get the Watch ESPN service, but what is going online is the RaceBuddy type companion application that features selected in-car cameras and some other race angles. Once again, the actual races will stay on cable TV only.

Brian France, Mike Helton, Robin Pemberton and other NASCAR executives will be on a media conference call Thursday starting at 12:30PM ET. Check social media like Twitter and Facebook shortly after things get underway for updates. No doubt Daytona tandem racing, car counts and even good old Jeremy Mayfield may be on the agenda.

Speaking of social media, it continued to expand as Mark Martin joined Twitter at the urging of car owner Micheal Waltrip. Just like Jimmie Johnson and Jeff Gordon, it should be interesting to see if Martin takes to social media like so many of the other drivers have done. Still no hope for Dale Earnhardt Jr. on the horizon, he just says no.

Many fans have been asking about Bootie Barker. Right now, there is no information available about him appearing on any SPEED shows. Jeff Hammond stepped into his place on the new NASCAR Performance show and he is not listed as appearing on RaceHub. The SPEED PR folks will pass info along if he joins an existing series.

Just a reminder that the motorsports season kicks-off this weekend with the Rolex 24 from Daytona. The race does not start until 3PM on Saturday but SPEED has the live coverage and there are a slew of big names from all forms of motorsports competing.

As usual, we welcome your comments on the topic mentioned above. To add your opinion, just click on the comments button below. Thank you for taking the time to stop by The Daly Planet.