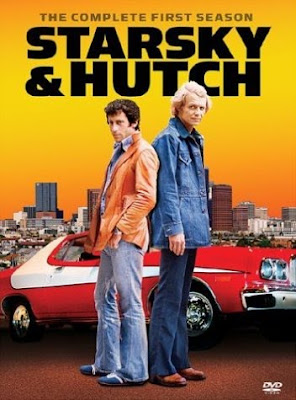 Nothing says Detroit horsepower like the 1975 Ford Gran Torino used in the Starsky & Hutch TV series. It was supposed to be a Chevy Camaro, but a last minute switch led to some quality exposure for the Ford brand.

While there was not much crashing at MIS, the investigation into what went on is going to require high speeds. Once again, the only real battle on the track was for clean air and all the other passing was on pit road. Tensions were high on green flag stops.

TNT presented a clean and neat pre-race show. Solid interviews with Jeff Gordon and Carl Edwards mixed with a nice Pride of NASCAR feature on AJ Foyt. Lindsay Czarniak is not a NASCAR person, but uses her TV skills to direct traffic and keep things flowing. This show was well-paced and loaded with information.

Adam Alexander has more a a conversational tone in the TNT booth as opposed to the excited style of Rick Allen on the truck series. Alexander meshes will with Kyle Petty and Wally Dallenbach, but the continuing perspective of having two drivers in the booth leaves a bit lacking perhaps.

Larry McReynolds used to contribute a lot more during the race itself, but this season he just seems to be pointing at the cutaway car and speaking with Czarniak during recaps. His perspective on race strategy is missed.

TNT has done a fine job of showing large groups of cars during the racing action and going very wide on the restarts. The scoring ticker is easy to read and runs at a nice pace. Pictures were not as nice as Pocono, but perhaps the overcast weather played a role.

Alexander and company hit a flat spot about two-thirds of the way through the race. Without Larry McReynolds to pump-up the group, the energy level plummeted. This was also the stretch that featured two minute plus commercials almost every five minutes. If not for RaceBuddy, it was kind of a challenge to stay focused.

TNT went to a late commercial under green with 14 laps to go. They hid the lap counter when they returned. Then, a caution came out. TV commercial break luck was not good at the end of the race.

Once again it was a wideshot for the finish, but TNT cut to it late. At least the network has erased the memory of FOX and the "drama" of just the winner. Fuel mileage races are certainly not exciting, but there is usually a little bump of excitement at the end. We can be sure that MIS is going to be on the schedule forever.

The final moment for TNT was the decision to leave the air seven minutes early to play the same preview reel viewers saw last week for TNT shows. Lots of key interviews were not done. While RaceBuddy presented a post-race show, that left TV-only viewers out in the cold.

This post will serve to host your TV race recap comments on the TNT presentation of the Sprint Cup Series race from MIS. To add your opinion, just click on the comments button below. Thank you for taking the time to stop. 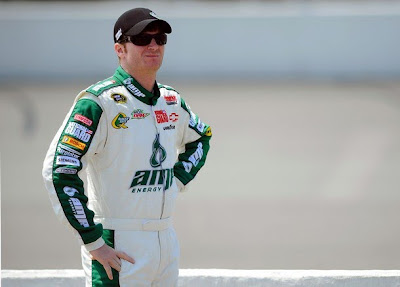 TNT rolls into Michigan for what many expect to be a fuel mileage shootout among the Ford teams. Ford dominated the Nationwide Series race on Saturday and has quickly become the engine story of this season.

Lindsay Czarniak will be hosting the Countdown to Green pre-race show. She will be joined by Kyle Petty and Larry McReynolds. This week's Pride of NASCAR will feature AJ Foyt. Driver Carl Edwards will join the TNT on the Infield Rig during the show.

Adam Alexander will call the race with Kyle Petty and Wally Dallenbach Jr. alongside. On pit road will be Chris Neville, Matt Yocum, Ralph Sheheen and Marty Snider.

Once again this week Turner Sports will offer the expanded RaceBuddy application. Having this for MIS is the same kind of positive element that Pocono enjoyed last week. Despite perhaps the race appearing to be boring at times on TV, once fans were allowed to make their own online choices about what to watch things stayed interesting.

This year RaceBuddy has also put the actual TNT call of the race on both mosaic channels. This allows fans who do not have access to the TV to finally be able to see and hear the races. If TNT added a single channel of the actual TNT feed, then NASCAR would have finally become a portable online sports product.

The downside of TNT is that the network is dominated by entertainment programming. The pressure for live sports to get off the air and make way for promotion of new shows was evident last weekend. Despite an early finish, TNT did only a basic set of post-race interviews and then departed.

The TNT PR folks said that additional interviews would be done on RaceBuddy, but that simply did not happen. The only thing provided was the usual post-race press conference coverage from the Infield Media Center.

NASCAR is a sport most closely associated with golf. Once the action is done, there are plenty of stories to tell and every athlete involved in the competition that day has fans looking for information. Now well into the heart of the season, TNT would be better served to use the pit reporters and fill the allotted time.

As usual, there is a lot of media pressure on Dale Earnhardt Jr. to win today. While his team is running well, the buzz is that the Fords have an advantage at MIS. It should be interesting to see how TNT treats the most popular driver on today's telecast.

As of 10AM, it was raining on the IndyCars in Milwaukee and the NHRA folks in Bristol, TN. No such problems at MIS, where the weather is expected to be good and the race should run as scheduled. The Saturday crowd was light, so keep an eye on the grandstands today.

This post will serve to host your comments on the TNT coverage of the Sprint Cup Series from MIS. To add your TV-related comment, just click on the comments button below. You can also follow us at twitter.com/thedalyplanet for live NASCAR chat during the race. Thanks for taking the time to stop by.