No Sirius NASCAR Channel On iPhones 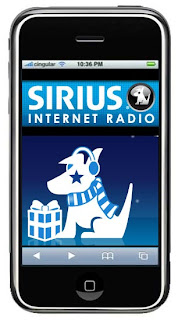 NASCAR fans with iPhones are discovering the problem that many of us with personal computers already know. NASCAR content from Sirius Channel 128 is not available online.

Sure, tons of other Sirius content is available to iPhone users, but the convoluted world of NASCAR media contracts has slammed the door on fans once again. Here is a statement from the Apple folks:

“Some select programming, including SIRIUS NASCAR Radio, will not be available on the iPhone and iPod touch. Listeners will continue to be able to access that programming through the platforms on which they are currently offered.”

TDP has already discussed the log jam that is in place between Sirius and the Turner Interactive Group that owns the NASCAR.com website. In simple terms, the current NASCAR deal with Turner allows Turner to control all online NASCAR content. That includes audio and video applications.

Among other things, this means that Sirius Channel 128's audio content cannot be streamed to desktops and laptops. Click here to view the online channel list. Sirius does not go out of their way to make this clear before sign-up.

In speaking with a customer service rep at Sirius, she told me that new users cancelling their online accounts because of the NASCAR restriction was commonplace. I asked her why this was happening and she told me to call NASCAR. She did not have a number and did not even know where that "company" was located.

Now, the spread of audio technology to wonderful gadgets like the iPhone has again revealed this problem in the NASCAR radio world. For many folks, the ability to carry a Sirius Satellite Radio receiver around is simply not available. Often, for a wide variety of reasons, it cannot be done in the workplace.

But, the one thing that most of us carry at all times is a cell phone. New models like the iPhone have a wide variety of wonderful applications available for all kinds of audio content.

ChannelWeb.com calls the new Sirius iPhone application a "choke job" because of the programming, including NASCAR, that is not included. Click here for the full story.

Ultimately, the folks who pay the price for all of this are the NASCAR fans. Sirius has come a long way in making their receivers smaller and much more portable, but there has to be a fix for this technology gap.

Wouldn't it be interesting to try and figure out just how many folks would listen to a NASCAR show or race on Sirius regularly if the signal was available online?

I wonder just how many NASCAR fans would use their laptops, desktops or iPhones to catch some NASCAR updates every single day? Count me among them.

This is a tough year for the sport. Opening a dialogue among the powers-that-be on this topic can hopefully result in some additional distribution of NASCAR's only 24 hour audio feed of news, interviews and racing.

Two years ago, this might have come down to a battle over money. Right now, it just might be the right thing to do.

Update: For those of you not familiar with Sirius it is a subscription service that provides multiple channels of news, music and entertainment. The signal is delivered directly by satellite to a receiver that can either be installed in a vehicle or carried by the user. The new Sirius iPhone application also requires users to pay a fee to access the available audio content. Should NASCAR be added to that package, fans would have to pay a monthly fee for the service.

TDP welcomes your comments on this topic. To add your opinion, just click on the comments button below. This is a family-friendly website, please keep that in mind when posting. Thank you for taking the time to stop by The Daly Planet.
Posted by Daly Planet Editor at 11:00 PM 40 comments: 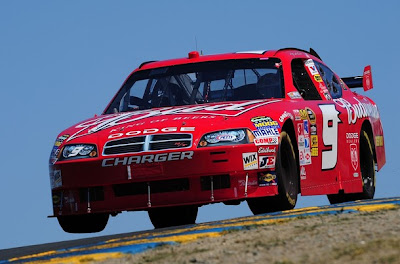 The Monday TV shows were full of smiling faces for the first time in a very long time. No one had to talk about another boring COT race. No one had to explain NASCAR's drug policy or the start-and-park problem. Sonoma had single-handedly turned the momentum of the sport around in one day.

Now, it was going to be up to ESPN and SPEED to recap the race and send the fans toward the next weekend with a good feeling. Allen Bestwick led Ricky Craven, Mike Wallace and Ray Evernham into this discussion on NASCAR Now.

Bestwick keeps a quick pace and this week the show had no guest. It was up to the four guys in the studio to work their way through all the topics. Evernham was excited for his former driver Kasey Kahne and it showed. Evernham also did a good job of explaining the very different road course strategy that Kahne's crew used to win in a stand-alone segment with Bestwick.

Craven continues to be the top studio analyst this season and once again he set the tone for the panel. Wallace provides the good humor and Evernham the strategy, but it is Craven who continues to offer the best perspective. One of his topics after Sonoma was winning.

"There obviously needs to be more emphasis put on winning," said Craven about The Chase for the Championship standings. He was reacting to JP Montoya and others admitting that they were points racing at Sonoma. Craven wanted to encourage more drivers to run like Kyle Busch and always go for the win.

"I would take the top twelve drivers who won a race and that would be my Chase," continued Craven. "You have to put the emphasis on winning. Fans loved the last ten laps of the All-Star race. Give them what they want."

Where the good Sonoma racing was concerned, Craven credited Goodyear for bringing a tire that stayed consistent and allowed for hard racing.

Steve Byrnes referenced some of Craven's ESPN comments on SPEED's This Week in NASCAR program later on Monday. Byrnes is a good historian and wanted fans to understand just how special and important having NASCAR's top series visit New England really was. It is their Daytona 500.

Byrnes was joined by Michael Waltrip who had done TV work for SPEED in Milwaukee and not traveled to Sonoma. Waltrip was still bothered by the Sunday comments of TNT's Kyle Petty and Wally Dallenbach that fuel mileage would come into play at the road course. Waltrip had finally watched a Sprint Cup Series race on TV and now he had some opinions to express.

Sunday on Twitter Waltrip had typed "TV people don't always get it. The only way fuel mileage becomes a factor is if the caution comes out during the round of last pit stops. If there isn't a caution during that time (about 5 laps) the fuel thing I've heard for the last 3 hrs. don't matter. Get it?"

"It's a race," Twittered Waltrip. "They (TV folks) make a very small part of what might happen the biggest story. Percentage wise, its not a story."

On Monday's TWIN he continued to vent. "I would rather have a fast car with bad fuel mileage than a slow car that can go a long ways," he said. "Going into the race that is all I heard about watching on TV, fuel mileage. Chances are, you are not going to get bitten."

Those were some rather interesting comments about the TNT crew from someone who works in the same capacity on the Camping World Truck Series for SPEED.

Chad Knaus was on the expert panel this week and he was the perfect person to fill in the gaps left by Waltrip's TV viewing. Knaus and his detail-oriented comments really helped many aspects of the actual racing to be explained. Knaus also backed-up Craven's comments that the Goodyear tire was a key factor in the good racing.

Knaus endured some good-natured ribbing about his driver Jimmie Johnson making contact with several cars during the race. That brought-up a good conversation about the crew chiefs having to keep their options open, even on a long road course.

Both TWIN and NASCAR Now took the time to show Nationwide and Camping World Truck Series highlights which is a great decision. This year, both of these series need as much TV help as possible to get through the season. Hopefully, this practice will continue.

Since Bestwick and Byrnes took over their respective TV shows, Mondays have become a fascinating exercise in watching basically the same highlights and information be offered to NASCAR fans in two very different ways.

Next Monday, the NASCAR Now roundtable will welcome former Cup driver and New England native Steve Park as a panelist. He will be joined by Brad Daugherty and Tim Brewer. Unfortunately, the original airing of the show will be at midnight due to tennis from Wimbledon. TWIN returns at 8PM with Greg Biffle joining Steve Byrnes and Michael Waltrip.

TDP welcomes your comments on this topic. Just click the comments button below to add your opinion. This is a family-friendly website, please keep that in mind when posting. Thanks for taking the time to stop by.
Posted by Daly Planet Editor at 7:00 AM 23 comments: