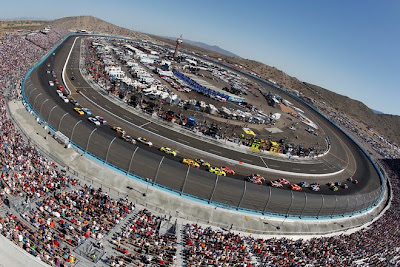 Good weather was a blessing as the NASCAR on FOX team covered the Sprint Cup Series race from the Phoenix International Raceway.

Chris Myers returned to lead the Waltrip brothers through the pre-race show. There was no outdoor stage, but the guys in the TV booth began their portion of the telecast with a liveshot from the roof of the PIR tower.

While the Daytona 500 is always an exception, PIR is the beginning of the long TV grind. FOX returned almost immediately to the formula the production team has used for years. Tight shots mixed with in-car cameras and replays used for incidents.

The coverage took several hits as the caution flag came out repeatedly while the network was in commercial. This actually became funny as time went by, FOX just could not buy a break.

PIR offers some of the most scenic camera views from high above. Once the racing settled in, FOX chose to focus on the formula of showing designated cars rather than the best racing on the track. This has been an ongoing fan debate for years and is the way the network feels they should present this product.

Mike Joy still directs traffic in the booth, but Darrell Waltrip is the show. Once again, there were times when the brothers Waltrip were talking back and forth during race action. It made Larry McReynolds seem a bit out of place.

Michael Waltrip is enthusiastic, but his role as a multi-car team owner in this series makes interpreting his comments tough. No matter how pure the intention, his words have to be filtered through the reality of Sprint Cup ownership.

After the halfway point of the race, the FOX director fully committed to showing the race in what we call "hyper-tight" style. Despite Joy in the booth trying to point out the racing on the track, the pictures viewers saw at home were of small clumps of cars without any larger perspective.

Since 2007, replays have become a central part of the FOX coverage. The downside of mixing tight shots with in-car cameras is that the vast majority of things happen outside of the two or three cars chosen to be on-camera at any given moment. This was the case again in Phoenix.

FOX went side by side with commercial breaks at approximately 5:30PM ET. The telecast was scheduled until 6PM and we were originally told the side by side commercials would be for the last hour of scheduled coverage. In addition, FOX executives said the network would try to expand this format during the season.

Down the stretch, the FOX team focused on the chase for the lead and continued to update the situation on fuel. The tight shots continued until the final lap, when a nice wideshot famed the finish line as the top five cars were shown finishing.

It's been a "hyper-tight" world for FOX and this style of production continued. The post-race was 12 minutes long as the network was beyond the scheduled coverage. Three of the top four finishers and the current series champion were interviewed before the network signed-off.

We invite your opinions on the NASCAR on FOX coverage of the Sprint Cup Series race from Phoenix. To add your TV-related comment, just click on the comments button below. Thank you for taking the time to stop by The Daly Planet.