Lots On The Media Menu At Watkins Glen 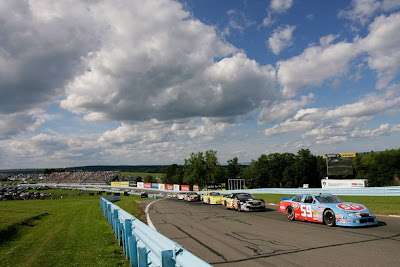 This weekend is the first where all the ESPN folks come together and start the run to the end of the NASCAR season. The Nationwide and Sprint Cup Series are finally side-by-side and both are being produced by the NASCAR on ESPN gang.

For the first time, Jerry Punch and Marty Reid will swap the play-by-play positions depending on what cars are on the track. Reid will handle the Nationwide action while Punch will call his third season of the Sprint Cup Series.

Dale Jarrett and Andy Petree are going to be doing double-duty this weekend and putting in some long hours covering both series. Also, the same four pit reporters will be working all the time that cars are on the track and ESPN is on the air.

The big Friday feature will be the 3PM ET Sprint Cup Series qualifying on ESPN2. There will be stories at both the front and rear of the field for very different reasons. The elite teams will be looking at the new restart rules and working very hard to put their cars as close to the front as possible. On the other hand, with 46 cars entered, there will be some folks taking the long drive home on Friday night.

ESPN has been challenged to match the outstanding Cup qualifying efforts of SPEED during the Fox and TNT portions of the season. The mix of live interviews while cars are on the track is a bit easier at this road course, but the dynamic runs of the fast cars should be featured completely. In this instance, in-car cameras are fantastic. It will be interesting to see what approach ESPN brings to this season's road course qualifying coverage.

Marty Reid will make his first appearance on Friday after qualifying at 5:30PM. Along with Jarrett and Petree, Reid will be covering the Nationwide Series practice session. This is going to be a treat as 49 cars are on the Watkins Glen entry list and many of those are special "one off" efforts featuring all types of drivers.

SPEED starts the day at 11AM with NASCAR Live. Steve Byrnes anchors coverage of early Sprint Cup practice at 11:30AM and then Nationwide Series practice at 1:30PM. Byrnes is with Jeff Hammond and Larry McReynolds as they continue their rock solid partnership that is six months down the road in presenting this type of coverage. SPEED wraps the day at 7PM with Trackside that will feature Boris Said and Max Papis as guests.

Click here for a review of the Twitter changes from ESPN. Aside from the occasional humorous Tweet, the silence from the formerly Tweet-happy NASCAR on ESPN reporters has been deafening. Now that Twitter itself has recovered from a Thursday interruption, it should be interesting to see how this new social media policy plays-out for the ESPN reporters at Watkins Glen.

This post will serve to host your comments on the Friday TV activities from Watkins Glen. This has the potential to be an outstanding day of NASCAR coverage. To add your TV/media related opinion, just click on the comments button below. TDP is a family-friendly website, please keep that in mind when posting.

Thanks again for taking time out of your day to stop by The Daly Planet.
Posted by Daly Planet Editor at 5:00 AM 47 comments: