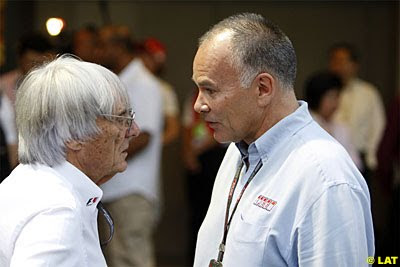 There are a lot of tidbits flying around today involving various kinds of motorsports media types. Here are some items crossing the TDP desk.

Peter Windsor is back on SPEED's Formula 1 coverage. You may remember his ill-fated US-based F-1 team effort. SPEED promoted it endlessly and then slowly crept away as it fell apart. Windsor is now based in London and will be contributing to the SPEED.com website expansion of F-1 content. He will not be a pit reporter. Will Buxton remains in that role.

Click here for a link to the Jalopnik.com story on Adam Corolla. He is currently fronting the new Car Show series on SPEED. This is the network's attempt to clone the popular Top Gear franchise. Unfortunately, Corolla is still stuck in his Man Show character and his sexist behavior toward women on the program is amazing. Now, he may just have a little bit more to deal with after his most recent rant.

Back on the NASCAR trail, two items are being discussed today. First, after perhaps the most memorable interview on NASCAR Now in years, ESPN executives made the incredible decision to cancel the only re-air of that show and instead re-air the entire Watkins Glen Sprint Cup Series race.

Greg Biffle had called into NASCAR Now live at 6PM Monday and proceeded to unleash his feelings on Boris Said. Biffle referenced incidents from the previous year's race and also explained what went on during and after the race with Said. This interview featured some of the most memorable NASCAR quotes in recent memory.

Since the re-air of the Biffle interview was cancelled, SPEED was quick to get Biffle into the RaceHub studio today where he will be speaking with Steve Byrnes on the 7PM ET show. Byrnes has a good interview style that gets the most out of guests, so it should be interesting to see what Biffle has to say now one day after the fireworks.

ESPN has confirmed it will be sending Rusty Wallace and Ricky Craven to Montreal this Saturday to team with Marty Reid on the Nationwide Series race. As usual, there will be no coverage of practice or qualifying. ESPN certainly has a love/hate relationship with the Nationwide Series once the network's Sprint Cup coverage begins.

I'm a fan of Jayski.com and the dedication of the small group working on that website. Big honor today as Time included Jayski.com on the list of the 50 best websites of 2011. Click here to read the story.

The full three hour scheduled re-airing of the Sprint Cup Series race from Watkins Glen will be on SPEED, as usual, at noon ET on Wednesday.

More items will be added to this post throughout the day, please check back later and make sure to give us your comments on these topics. 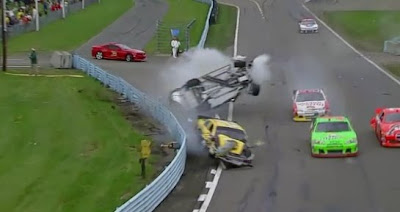 On this delayed coverage, ESPN does not have the Infield Pit Studio and Tech Garage. The telecast was simply the trio in the TV booth and the pit road reporters.

The race coverage was straightforward and basic. The early laps featured a wet track and foggy conditions. Once the fog lifted, the real racing started after the halfway mark when the race was official.

ESPN stayed focused on the battles and stories within the field. There were few distractions as the sequence of green flag pit stops and lead changes was the order of the day.

A crash involving Kurt Busch featured ESPN using an in-car angle of the accident, including the impact on the driver. The producer waited until Kurt was out of the car and walking around to show this angle. Busch was also interviewed.

Denny Hamlin had a hard crash while coverage was in commercial break. Hamlin's accident was replayed numerous times and a follow-up interview was done.

The final lap of the race featured a large crash in the back of the field that involved at least one car rolling over. ESPN stayed with live coverage of the race for the lead until the caution flag was displayed.

Replays documented how the final lap accident occurred. This was one of the hardest road course crashes involving multiple cars in years. ESPN interviewed the winner of the race and also the drivers involved in the accident.

This post will serve to host your comments on the ESPN coverage of the Sprint Cup Series race from Watkins Glen. To add your TV-related opinion, just click on the comments button below. Thanks for stopping by.