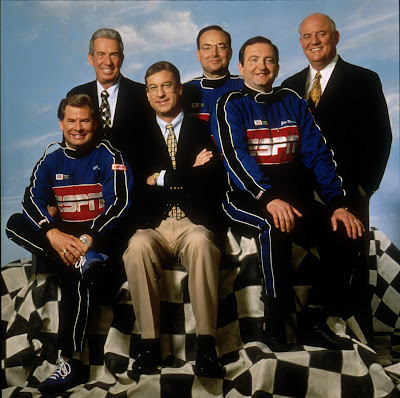 It has been quite a while since Bill Weber, John Kernan and Jerry Punch patrolled pit road. It seems even longer since Ned Jarrett, the late Benny Parsons and the original NASCAR on ESPN announcer Bob Jenkins brought stock car racing into living rooms across America.

This Friday, some twenty-five years after live coverage began, TV viewers not only get all three national touring series on the track in Texas but they also get to see four modern-day teams of NASCAR TV broadcasters in action.

SPEED is stepping-in to handle the Nationwide Series practice and qualifying. The familiar faces of Steve Byrnes, Larry McReynolds and Jeff Hammond will be providing that coverage. Bob Dillner and Wendy Venturini will be the reporters. Practice is at 10AM and qualifying is at 6:30PM on SPEED.

Next-up will be the ESPN team of Dr. Jerry Punch, Dale Jarrett and Andy Petree. These three have worked on NASCAR all season long like the SPEED team and on Friday they will be handling Sprint Cup Series practice and qualifying. Mike Massaro, Shannon Spake, Jamie Little and Dave Burns will cover the pit and garage areas. Practice starts at 1PM and qualifying will be at 4:30PM. Both telecasts will be on ESPN2.

The third TV team has worked all season to fill-in the TV gaps in the on-track action and has cemented a reputation for going and getting the interviews that fans want to see. NASCAR TV veteran Randy Pemberton and relative newcomer Hermie Sadler have teamed-up to provide host John Roberts a solid one-two punch in the garage area. Each of these three has a personality that works great in the TV format of NASCAR Live. Friday's show will be on the air at 8PM on SPEED.

The final TV team is one hard-working bunch. They may be a little under-manned, but the Craftsman Truck Series crew has been hitting it out of the ballpark all season long. Fan favorite Krista Voda should be right at home in the chaos of the starting grid at the Texas Motor Speedway when she hosts the pre-race show at 8:30PM.

Her "go to guys" are Rick Allen, Phil Parsons and Michael Waltrip. This is the type of racing that Allen loves to describe, a fast mile and a half track with the Truck Series doing what they do best. Parsons and Waltrip have learned to combine their voices on this type of high-intensity broadcast over the season.

This team is topped-off by Ray Dunlap and Adam Alexander who patrol the pit road where over thirty teams are based. No matter how they do it, these two get the pit coverage done and are always on top of the stories of the race.

On this Friday from Texas, NASCAR fans can sit down at 10AM and stay there until 11:30PM with only a few breaks for snacks. The minimum manual labor required is the occassional changing of the channel. From practice and qualifying to the exciting Truck Series race, four TV teams will be working hard to bring the NASCAR action to the viewers. We want to know how you like the coverage.

This post will serve to host your TV-related comments about the programs from 10AM through 8:30PM on both ESPN2 and SPEED. There will be a new post up for live comments during the Truck Series race at 7:30PM. The entire weekend schedule is broken-down for fans on the right side of the TDP main page.

Thanks again for stopping by, please review our simple rules before posting. To add your comment, just click on the COMMENTS button below and follow the easy instructions.
Posted by Daly Planet Editor at 7:35 PM 64 comments: 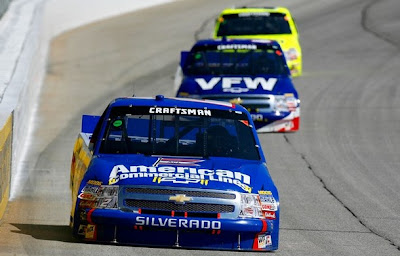 Talk about the little engine that could. A few weeks ago, Internet sites were talking about the potential demise of the Craftsman Truck Series after this season. Short fields, team sponsorship battles and the pending departure of Craftsman after more than a decade told a dismal tale.

Now, after another strong TV ratings weekend in Atlanta, the Truck Series has a new multi-year title sponsor and a new lease on life. Friday night, free from the competition with major college or pro football, the Series will be live on nationwide TV. It could be a huge ratings night for NASCAR.

This turn-a-round has been spectacular in a season known for flat TV ratings and more driver-swapping than good racing in the Sprint Cup Series. Once again this year, the Nationwide Series is featuring two Sprint Cup cross-over drivers battling for the title. Only the Trucks have really forged their own identity, despite the occasional Cup driver appearances.

In some way, the wild drives by Kyle Busch in the Truck Series this season have added to the fun. The series "regulars" don't treat Kyle with kid gloves and several times this season Busch has made his way to his transporter very promptly after a race. He was sometimes trailed by other drivers who wished to continue an on-track conversation.

The reality of this series is that it has a bunch of "old school" racers who fans simply appreciate. Ron Hornaday, Johnny Benson, Mike Skinner and Jack Sprague are just a few of the easily recognized names of drivers in the series. Others like Rick Crawford, Todd Bodine and David Starr are perhaps best-known for their truck careers. It is truly a series of diverse personalities.

SPEED has become part of the story in just the way that NASCAR really enjoys. The TV coverage has quietly let the racing do the talking and kept a sense of humor and simplicity along the way. Krista Voda has been a key part of that for several years now.

As the host of the pre-race show, called The Set-Up, Voda and her Producer stripped everything away this season and simply put Voda standing at the head of pit lane. During her thirty minutes, officials and team members walk by doing their jobs and curious fans snap pictures. Voda is un-fazed by it all, treats everyone like family and handles the elements like a trooper.

Rick Allen was plucked from Nebraska of all places and brought-into the Craftsman Truck Series as a relative unknown. Since that time, he has worked very hard to master his role as the play-by-play announcer for SPEED. Allen has kept things in perspective and shares the same gift with Voda. They let others shine.

The beneficiary of Allen's style has been Phil Parsons. In much the same way that Larry McReynolds seems to be a part of every single Sprint Cup Series race, Parsons is the single best source of Truck Series information on TV today. Showing the same relaxed and well-mannered style as his late brother Benny, Phil has cemented himself a place in this series with his hard work over the years.

Adam Alexander and Ray Dunlap cover pit road and report for the series during practice, qualifying and the pre-race show. Alexander is a quick study and has stepped right into this series without missing a beat. Dunlap continues to be the character that everyone loves to discuss. Although he has toned-down his off-beat antics, Dunlap is still opinionated and colorful as his recent appearance on Tradin' Paint confirmed.

The powers that be at SPEED put Michael Waltrip into the broadcast booth of this series to add some excitement. At the time, Waltrip was so over-saturated on SPEED and on NASCAR TV in general the move did not go over well. Waltrip did not help himself by shilling for Toyota and generally talking over-top of everyone.

This season, Waltrip has improved tremendously and that might be to the credit of Steve Byrnes. On Monday nights, Byrnes hosts This Week in NASCAR where Waltrip is a regular panelist. As opposed to the mild-mannered Allen, Byrnes is not afraid to step right in and stop Waltrip in his tracks when he is off on a tangent. The result has been that Waltrip has learned to listen.

As a group, the SPEED team has shown time-and-time again that less is often more on TV. Without the flashy graphics or the fancy features, SPEED has let the racing on all kinds of tracks lead the way. My belief is that is why the series has experienced a resurgence this season. Fans get the race and not the hype.

This Friday, the Trucks get the big Texas Motor Speedway to themselves in primetime under the lights. Voda hosts the pre-race at 8:30PM and the race kicks-off shortly after 9PM. Adding some spice to the Texas mix will be the fact that sports car ace Max Papis, Red Bull's chosen son Scott Speed and the one and only Kyle Busch will all be racing along with the series regulars.

The Daly Planet will be live during and after the race for your comments. As the season comes toward the end, perhaps you can use this post to offer your views on the coverage of the Craftsman Trucks Series this season on SPEED and suggest any changes you might like for next year.

To add your comment, just click on the COMMENTS button below. The rules for posting are located on the right side of the main page. Thanks again for taking the time to stop by.
Posted by Daly Planet Editor at 7:10 PM 41 comments:

To add your comments on these topics, just click on the COMMENTS button below and follow the easy instructions. The rules for posting are located on the right side of the main page. New stories will be added during the day.
Posted by Daly Planet Editor at 10:55 AM 5 comments: