The TV Cost-Cutting Talk Has Begun 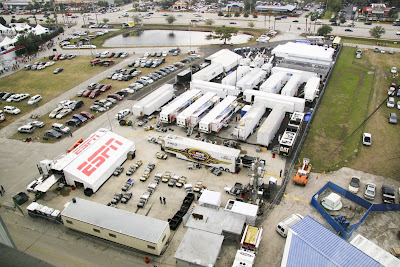 The outstanding Charlotte-based reporter Michael Smith offered an article Monday updating the concerns of the NASCAR TV partners about declines in advertising revenue for 2009.

While one way to keep the current advertisers in the sport is to offer a new level of cooperation and integration between the TV partners, there is also an eye toward cutting TV production costs for the upcoming year. You can click on the picture above to see the tremendous size of a typical NASCAR TV compound.

Click here for the link to the full Sports Business Journal article, while here are some excerpts:

Facing a discouraging ad market, Fox is talking to NASCAR and ESPN about ways the network can save money on its broadcasts of the sport next year. Fox was expected to meet with NASCAR this past week and ESPN in the coming weeks to explore potential cost cuts on the production side.

NASCAR's Paul Brooks said the sanctioning body will work with Fox to find savings as long as the viewers won’t notice a difference. “There are additional things we can look at as far as sharing and managing facilities in an even more efficient way,” Brooks said.

Can broadcasters get by with 55 cameras instead of 60? Can they share a production truck over the course of a weekend instead of using multiple trucks? Those are the kinds of cuts the TV networks will weigh.

“It’s something we’re very cognizant of,” said Rich Feinberg, ESPN’s vice president of motorsports. “Every business has been affected by the economy and we’re just trying to stay ahead of those things. Our content will still be there, but we’ve got to take a closer look at how we acquire that content. Are there areas where we can be flexible?”

The combined TV rights fee for Fox, ESPN and Turner averages $560 million a year through 2014. Additionally, each of the networks has a multimillion-dollar spend with NASCAR Media Group, which manages the TV compound at each venue and provides additional content, such as unique camera angles and audio.

Smith explains that NASCAR is happy with the balance between races on cable and broadcast network TV, so changes in that area are not going to happen. Neither will NASCAR consider moving any races to pay-per-view.

All three of the Sprint Cup TV partners had very specific reasons for buying into the current NASCAR TV contract and those reasons have not changed. The most likely scenario for 2009 is an increased sharing of on-site facilities between the TV partners.

No mention has been made of eliminating hard costs like The Hollywood Hotel, ESPN's Infield Pit Studio or the TNT rotating infield stage. We saw that TNT shot all the Wally's World features at Pocono in 2008 in order not to travel the cars and support personnel. Tim Brewer's ESPN Tech Center is also a very expensive item.

Reductions on that scale would no doubt result in less on-air and behind-the-scenes production folks traveling to the races. While all these elements would change the broadcasts as we know them, keep in mind that SPEED handled the entire 2008 Truck Series with four or five total announcers, no infield facilities and few added costs. The result was a tremendous increase in TV ratings and an outstanding year.

We will keep you updated on these issues and thanks again to Michael Smith and The Sports Business Journal for the information in his report.

The Daly Planet welcomes comments from readers. Just click on the COMMENTS button below and follow the easy instructions. The rules for posting are located on the right side of the main page. Thank you for taking the time to stop by.
Posted by Daly Planet Editor at 7:00 AM 45 comments: