Repost From 2013: Why SportsCenter Hates NASCAR 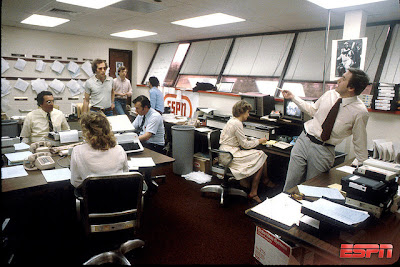 Take a good look at the picture above. You can click directly on it to see it full-size. On the right in the tie is a young Bob Ley. The man standing in the middle of the picture with the glasses is Stephen Bogart. He looks to be producing the show being prepared and yes, he is Humphrey and Lauren's boy. On the left seated and also in a tie is "Sweet Lou" Palmer.

On the desk to the right is a stack of 3/4 inch video cassette tapes. On the bench under the windows are the two record/play machines wired to two TV sets. Those papers hanging on the wall to the left are called wire copy. The AP and UPI sports stories look to have been neatly assembled by Production Assistant Steve Dirks, the man in the blue jeans.

Those things on the desk are called typewriters. On those single line telephones, you had to dial "9" to get an outside line. There is trash on the floor, boxes crammed under desks and Hank Aaron swatting the big one out on the wall.

The room is full of dedicated people making little money who believed in creating something new. The year is 1979. That is the ESPN newsroom.

The concept was simple. Take a look at what was going on in sports that day. Then filter out the news items and edit the videotape highlights. Run to the studio and put on a show giving sports fans nationwide a rundown on what happened.

SportsCenter was fun, hectic, irreverent and loved by cable TV viewers for all those reasons. Ultimately, it was the programming franchise that built ESPN. It added words to our vocabularies and faces to the national television landscape.

Now, over thirty years later, SportsCenter is seen on ESPN, ESPN2 and ESPNEWS. There is often over twenty hours of SportsCenter content spread between these networks daily. The early evening show is from Bristol, CT. The late show is from the ESPN studios in Los Angeles, CA. The daytime show is now done live and features the power duo of Hannah Storm and Kevin Negandhi.

Along the way, the franchise has changed. ESPN has gone from reporting the stories to becoming part of them. No longer is ESPN's news operation an interested observer with an accurate report. The thrust of SportsCenter is now to use the power of the ESPN family of television networks to feature and promote the topics that tie into ESPN's own programming.

When NASCAR and ESPN said a bitter goodbye in 2001, the reality of SportsCenter and credibility was immediately driven home. In the blink of an eye, NASCAR went from a SportsCenter staple to a memory. Angry that NASCAR had struck a deal without ESPN involved in the top series, this major professional sport was relegated to barely a mention.

The current crop of SportsCenter management remember this all too well. They actively participated in trying to wipe NASCAR off the map. It might have been a choice ESPN tries to defend as related to track access, but in fact it was a purposeful campaign to make NASCAR pay for leaving the mothership.

Well, a funny thing happened to that plan. NASCAR thrived on FOX, TNT and NBC. Despite the smear campaign, guess who came right back to the bargaining table for the next NASCAR TV contract? ESPN was first in line with cash in hand. ESPN came away with the final seventeen Sprint Cup Series races and the entire Nationwide Series.

Now, these same SportsCenter types who had openly mocked NASCAR for years had themselves a little problem. Not only was NASCAR returning to the mothership, but ESPN had the Chase for the Championship for years. At the height of the college and pro football seasons, SportsCenter now had to report on NASCAR's version of the playoffs.

In came familiar names like Marty Smith, David Newton and Ryan McGee. Bolstered by others who lived outside of New England, SportsCenter grudgingly tried to integrate NASCAR content back into the news franchise that started it all. The result has been a complete, miserable failure.

Now five years into the current NASCAR TV contract, the open contempt and outright hatred of NASCAR by SportsCenter anchors is not only tolerated, it is encouraged.

It was SportsCenter anchor John Anderson who came on immediately after the Nationwide Series race from Chicagoland Speedway. That same day the Camping World Trucks had raced in Kansas and Richard Childress had gotten into a little dust-up with Kyle Busch after the race.

Anderson was annoyed from the start that NASCAR lead SportsCenter. He started by calling the highlights of the Nationwide Series race complete with all the same mistakes made live by announcer Marty Reid. It was pathetic and it was painful, but Anderson was just getting warmed-up.

Marty Smith is a patient man. After five years of dealing endlessly with SportsCenter talent who know nothing about NASCAR and could care less, Smith's "phoner" into the show carefully explained the Busch and Childress history and NASCAR's perspective on boys having at it.

Anderson then told Smith he was appalled that there could be a fight after a race. He was amazed that an owner would possibly act that way. He was even more confused as to how two professional drivers like Carl Edwards and Justin Allgaier could possibly run out of gas on the track? Don't they get that for free?

Once Anderson's four painful minutes of NASCAR highlights and speaking with Smith were over, his smug look of disgust turned into a grin. "Now...we have some baseball!!" he screamed with delight. In the SportsCenter world, things were back to normal.

The bottom line is that SportsCenter hates NASCAR because the ESPN management allows it. Any interruption of the flow of the stick-and-ball seasons by racing will be met with the arrogance we now know as a trademark of the group that promotes itself as the Worldwide Leader in Sports.

It's always interesting to look at how something got started and where it is today. As someone once said, it all seemed so simple back then.