Waltrip Part Of An Interesting Hall Of Fame Group 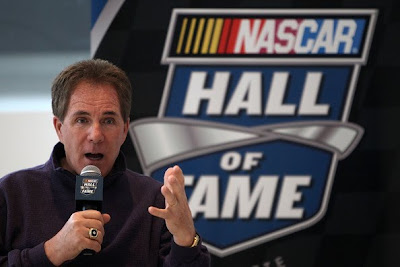 Voting Update 4PM: Well, "ole DW" is in! Here are the new 5 inductees: Darrell Waltrip, Cale Yarborough, crew chief Dale Inman, modified champ Richie Evans and Glen Wood. Leaving this post up as the lead to get more comments on the Hall of Fame selections.

Here is the original TDP post before the selection:

It was one of those TV moments that was impossible to forget. Last fall, SPEED allowed nominee Darrell Waltrip to participate in the live telecast of the NASCAR Hall of Fame selection announcement. It was a big mistake.

The selection committee considered Waltrip's career racing stats, his current FOX television work and his role as a high-profile spokesman for the sport. When the names of those selected were read, Waltrip was not on the list.

This from AP NASCAR writer Jenna Fryer : "It was foolish for Darrell Waltrip to participate in the live broadcast of last year's NASCAR Hall of Fame voting day, when he was publicly humiliated by being snubbed from the five-member second class. Waltrip was stoic on the air, but as the color drained from his face as the inductees were announced, his exclusion clearly wounded him."

This from SBNation's Jeff Gluck: "Instead of looking at accomplishments and records, the Hall of Fame voters looked at their own personal biases and feelings. The theory here is that Waltrip, nicknamed Jaws for infamously flapping his gums, rubbed many people the wrong way over the years."

Tomorrow the process repeats itself and Waltrip is again on the list of nominees. This time, however, he is not a member of the SPEED telecast. Mike Joy will anchor the coverage with Ken Squier, Kyle Petty and Rick Allen on the panel. Randy Pemberton will handle the interviews.

While there are a total of 55 people who cast Hall of Fame votes, the TV and radio personalities include Dr. Jerry Punch, Joy, Petty, Barney Hall, Doug Rice, Allen, Dave Moody and Squier. It is widely held that this group is one of the strongest in favor of Waltrip's selection.

The other groups voting include NASCAR officials, track operators, and manufacturer representatives. From within the teams there are retired car owners, crew chiefs and drivers. A few of those key names include Ricky Rudd, Bud Moore and Buddy Parrott.

SPEED will begin the day at 3PM with a live preview show that will recap and discuss the nominees. The topic of selection criteria came up on this program last year and the discussion was quite lively. It seems that even among media folks, there are widespread differences of opinion about how to fill the hall.

At 4PM the selection show will begin. It has been Brian France announcing those names since the Hall of Fame opened. France has been very busy reorganizing many of the key pieces of his family business even as he continues to go through a very nasty public divorce. Several new key executives are now in Charlotte and ready to go.

Perhaps, TV viewers will finally get to hear from the new NASCAR PR chief Brett Jewkes. Unlike the comforting presence of the late Jim Hunter, Jewkes has yet to appear on television and introduce himself to the fans. It would be interesting to hear his opinion on the Hall of Fame as an executive relatively new to the sport.

Make no mistake, there is a very real possibility that Waltrip may once again not make the list. First of all, voters are looking at many nominees from NASCAR history long before Waltrip came to the sport. They include Red Byron, Tim Flock and Raymond Parks.

Secondly, while the strength of Waltrip's vote may be with the media, there is no way to gauge the relationship Waltrip has with the other voters. They may not be inclined to consider someone relatively young (64), in good health and still actively working in the sport while much older nominees are on the list.

While everyone will be waiting for the selections, the real drama once again will be whether one of the most high-profile TV personalities in the sport finally gets a Hall of Fame jacket with his name on it.

We welcome your comments on this topic and will use this post to blog about the two Hall of Fame shows on SPEED Tuesday afternoon. To add your opinion, just click on the comments button below. Thank you for taking the time to stop by The Daly Planet.