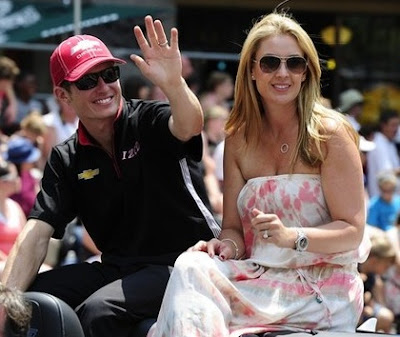 Every year we live blog the Indy 500 telecast as it takes place on ABC. This year, we will once again be hosting comments here but will also have a Twitter stream going using the #TDP1 hashtag. That is Nicole and Ryan Briscoe shown above in the pre-race parade as Ryan is the polesitter this season.

There are lots of IndyCar folks on Twitter, so this year's race should have the most information and the most commentary ever provided by social media in real time. SBNation reporter Jeff Gluck and AP reporter Jenna Fryer, both formerly assigned to the NASCAR beat, will be in Indy for the 500 this season instead of Charlotte.

ABC will host an hour of pre-race with Brent Musburger beginning at 11AM Eastern Time. Marty Reid will call the race with Scott Goodyear and Eddie Cheever. Jamie Little, Jerry Punch, Vince Welch and Rick DeBruhl are the pit road reporters.

The ESPN production team is a hybrid mix of IndyCar regulars, NASCAR folks and lots of company management types. This is the big one. There will be 80 cameras, nine cars with onboard cams and the infamous "bat-cam" that races down pit road on a slim wire at up to 80 mph. It's great for restarts.

Here is a breakdown of the elements that TV viewers will see in the pre-race:

•Dan Wheldon: A Champion’s Story — interviews with drivers, owners and family members celebrating the life and championships of the 2011 Indianapolis 500 winner who died in a racing accident in October.

•JR Hildebrand: 799 Correct Turns and 1 Wrong Turn – A first-person feature about the heartbreaking finish of the 2011 Indy 500 for Hildebrand, who crashed with the checkered flag in site.

•James Hinchcliffe – The driver who has captured IndyCar fans with his sense of humor as well as his ability behind the wheel does a parody of the Danica Patrick/GoDaddy.com commercials.

•Dario Franchitti Museum Tour – The multi-time IZOD IndyCar Series champion takes a private tour of the Indianapolis Motor Speedway Museum, exploring the history of the race and his desire to win his third.

•Charlie Kimball: Inspiring Others — Kimball, the first diabetic driver to finish the Indy 500, has inspired a 12-year-old girl from Kansas to believe she can do anything, despite living with diabetes.

•ESPN Sport Science takes a detailed look at the new DW12 IndyCar chassis that debuted this year and details the changes from previous chassis.

•Memorial Day — The story of a mother who sacrificed a great deal when her son Ben lost his life fighting for his country. She visits Arlington National Cemetery to tell her story.

This year for the first time ESPN will be streaming some video online during the race. ESPN cable TV subscribers who have the WatchESPN service will be able to log into ESPN3 and watch the in-car cameras live. It's not clear from the media releases if the audio associated with those feeds will be the team radios, the natural sound from the car or the ABC telecast.

One unique feature of this Memorial Day event is that the race will be seen internationally not only on ESPN's affiliated networks, but on the American Forces Network that serves US troops worldwide.

The current version of the IndyCar is very different from last season. The challenges of racing at Indy look to make two-wide racing impossible through the corners and tough on the straights except to pass. Even the restarts after the ceremonial three wide start are going to be single file. It's going to once again be a war of attrition.

Reid had a tough time coming over to NASCAR, but hosts a solid Indy 500 and is a veteran at keeping the information flowing. His analysts are outstanding and the disagreements between the analytical Goodyear and the emotional Cheever make for great TV. It's going to be very hot and the pit road reporters may be telling a tale of both mechanical and personal challenges during the race for the teams.

After the final race last season and the resulting tragedy, it is going to be more important than ever before to put on a good show on this big stage for the series. Without Danica it may come down to the powerhouse teams vs. the underfunded independents to create the storylines when all is said and done.

We invite your TV comments before, during and after the race. Please focus on the ESPN coverage of this event on ABC.  This is not a post for NASCAR or Formula One comments as both series will also be racing on Sunday. Comments may be moderated prior to posting.
Posted by Daly Planet Editor at 12:04 AM 36 comments: