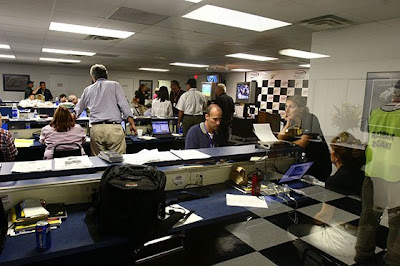 TDP established a working relationship with the NASCAR Media Relations staff when this project was started back in 2007. Since then, some things have changed.

Many traditional newspapers and news organizations were forced to leave NASCAR behind as they consolidated due to tough economic times. Veteran reporters were let go and the NASCAR media scene changed for both the fans and the teams.

Now, the remaining members of the traditional traveling media are working in a very different way. They provide original content that is then moved around the Internet with lightning speed. Many reporters actually use Twitter to update fans during the live race and then write a full story after the checkered flag.

This changing media dynamic is not limited to NASCAR. Websites like Deadspin, The Big Lead and the AOL Fanhouse have changed the way many fans enjoy their favorite pastime. They represent the blogging side of sports on the Internet.

NASCAR has now made the first move to deal directly with bloggers in a new program that gives more access to information for some select websites. Click here for the story posted at NASCAR.com about the "citizen journalist" announcement.

As you may have noticed, TDP is on the list. What this program essentially does is reach out and grant more access to information for the bloggers. It grants access to the NASCAR media website that requires a password to get official photos, news and updates. In addition, it removes the roadblock of not allowing bloggers to get credentials to press conferences and the infield media centers.

This does not mean for one minute that a bunch of fans are going to show up and eat free pizza in the media center while pretending to type on their laptops. NASCAR went through a lot of websites and tried to pick an interesting cross-section. At most, this is the first movement of a very large and tightly controlled glacier with NASCAR stamped on it. The media ice may be thawing just a bit.

To most fans, the website list features a lot of familiar names. Some of these great sites have been plugging away at this sometimes touchy sport for years without any access to official information or press conferences. NASCAR gets a lot of credit for opening up and trying to address the shifting media dynamic.

My friends over at The NASCAR Insiders asked why no stories had appeared on the web about this new media wrinkle. My feeling is that it will take some time for this to shake-out in terms of building new relationships between bloggers, NASCAR officials and the mainstream working media.

We will certainly keep our readers posted on what is going on and how things change as this new initiative moves forward. I am a regular reader of almost all the sites on the list and think that NASCAR did a good job in this selection process.

As usual, we welcome your comments and questions on this topic. Responses to questions will just be posted right in the comments section. This is a family-friendly website, please keep that in mind when posting. Thanks for stopping by.
Posted by Daly Planet Editor at 11:00 PM 32 comments: 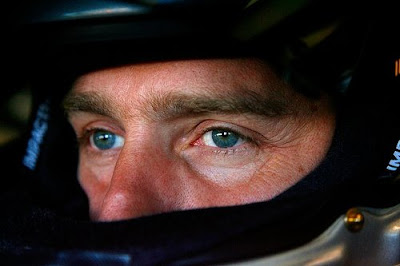 New info: Head over to our friends at 4wide.com for a copy of what is said to be a negative lab report on Mayfield. Offered by his attorney, it looks like the other side of this issue is slowly creeping toward the surface. It's now or never. Click here for the direct link.

The hero, the underdog and the persecuted. Jeremy Mayfield worked the legal and public relations angles continually since his initial positive urine test for meth.

Right up to the end, he maintained his innocence and pointed to his victory in a recent court ruling that returned him, in theory, to the track.

The end came Wednesday afternoon when NASCAR confirmed through documents submitted to the court that Mayfield has indeed tested positive once again for meth. Now, the logical conclusions begin to fall on the other side.

Mayfield's attorney suggested the first test from Aegis had reported meth levels so high a normal person would have been a zombie. The only exception would have been someone who was a longtime addict. That seems to be someone named Jeremy Mayfield.

The long and confusing story about Mayfield getting lost on the way to a Monday test now makes sense. Mayfield was attempting to dilute his sample and delay the test. This time, it did not work.

NASCAR has basically asked the District Court to end the temporary injunction it granted Mayfield. The judge told NASCAR it could test Mayfield whenever it pleased. They did and confirmed the first result. This time, NASCAR and Aegis took the time to close all the loopholes.

In a way, all of this comes to a close at the only quiet time before the seventeen race run to the 2009 Sprint Cup Series Championship. ESPN2's NASCAR Now, SPEED's Wind Tunnel and The SPEED Report will be the only shows on the air. There is no RaceDay, no SPEED Stage and no This Week in NASCAR.

By the time things crank-up for The Brickyard, Mayfield will have joined the number of other NASCAR license-holders this season who have been asked to leave and get their lives in order because of substance abuse.

This time, let's hope for the sake of the sport that Brian France and Dr. Black do not appear on camera for interviews. In addition, it should be interesting to see which local media types try to get Mayfield on-camera to see what direction his life is taking.

NASCAR's Sprint Cup Series drivers and teams are enjoying about ten days of vacation before the long run to late November. Upon their return, they may all be relieved to know that one troublesome topic is off the table and NASCAR can concentrate on racing once again.

Click here to be reminded of why we used "drowning face down" on the title of this post. The band is Saving Abel.

Click here for WSOC-TV's Alan Cavanna who got Mayfield on-camera talking about the issues.

Friday update: WBTV learned from a source on Thursday that Mayfield has sold his race shop and equipment located on Highway 49 in Harrisburg, NC.

TDP has followed this story from the start. Readers have been very vocal in their opinions of the NASCAR media and how this story was covered. We would ask for your final opinion on this topic in terms of how you got information about Mayfield and what you think was good and bad in the coverage of this episode?

To add your opinion, just click on the comments button below. This is a family-friendly website, please keep that in mind when posting. Thanks for stopping by, even on this sad day. Good luck to Mayfield in his recovery, it has to start somewhere. Today might be a good choice.
Posted by Daly Planet Editor at 10:30 PM 306 comments: