You Tube Millionaire Takes A Pass On NASCAR 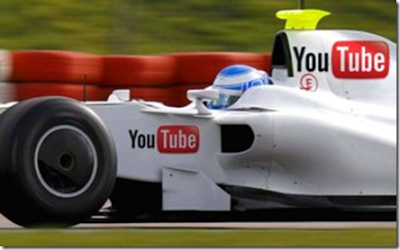 It was quite a friendly affair Sunday night on SPEED. Krista Voda hosted the Wind Tunnel program for the vacationing Dave Despain.

Joining her in the studio were SPEED's Bob Varsha and Ken Anderson, one half of the pair daring to start a Charlotte-based American Formula-1 team. Open wheel fans were buzzing because there was also going to be another guest on the program.

Chad Hurley, the co-founder of You Tube, joined the show via satellite from the West Coast. The secret was out. Hurley was joining the USF1 effort as the primary investor in the team. The money-man had been revealed.

He is still actively working for You Tube, but Hurley and his partner sold that company to Google back in 2006 for 1.65 billion dollars. Now, Hurley wants to combine his knowledge of online business with his Silicon Valley contacts to bring a new team dynamic to F-1. That dynamic involves social media interaction with the fans.

Click here for an excellent interview from Autosport.com with Hurley on his plans.

The whooshing sounds heard in both Daytona and Charlotte were the tens and maybe hundreds of millions of Hurley's dollars passing NASCAR by without even waving. While this funding could have produced a new and powerful sponsorship on the Sprint Cup Series level, there is something even more important that could have been accomplished with Hurley's assets and experience.

The power of this huge investment coupled with Hurley's understanding of the evolving world of online media could have finally released NASCAR from their crippling contract with the Turner Sports New Media Group. This is the company that operates NASCAR.com and prohibits any use of online NASCAR content by other providers. Click here for the information on that agreement that runs through 2014.

The Turner Group is the reason SiriusXM NASCAR Channel 128 is not available on your computer or cell phone. They are the reason none of the thousands of hours of footage and TV programs sitting on the NASCAR Media Group's hard drive can be made available for streaming online.

There are no web-based NASCAR TV shows, no live online interviews from the drivers and no classic NASCAR shows available on TV network or program streaming websites. The stranglehold of Turner where online NASCAR content is concerned seems to be total and complete. Well, there is one exception.

Frustrated fans have been going to You Tube for years to find the NASCAR footage that keeps them connected to the sport. They go to watch handicam footage from fans in the stands as well as race highlights edited by amateurs and posted online.

Click here for highlights of the Sharpie 500 on the official You Tube NASCAR Media channel. Once the video begins, you will notice something rather strange. The only race highlights from NASCAR's own channel are still photos. NASCAR can't even use their own race footage online.

Amateurs and fans are the ones posting the hundreds of other videos of the Sharpie 500. They contain everything from the flyover to complete race reviews with voice-overs. You Tube is where NASCAR fans go for video.

Had Mr. Hurley come to NASCAR and bought out the Turner Media contract, it would have put a forward thinking new media veteran at the forefront of a sport desperately in need of an online and social media overhaul from top to bottom. Instead, it will be business as usual when the 2010 season rolls around where NASCAR's fractured online presence is concerned.

TDP welcomes your comments on this topic. To add your opinion, just click on the comments button below. This is a family-friendly website, please keep that in mind when posting. Thanks for sharing your opinion with others on The Daly Planet.
Posted by Daly Planet Editor at 8:00 PM 46 comments: