Crunch Time For The "B Team" 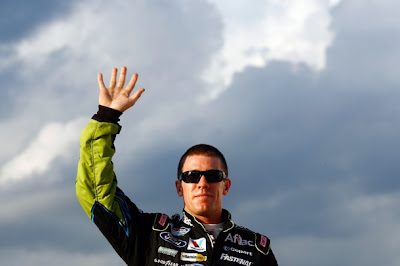 The weekend started with SPEED having the first troubles at Gateway and wound-up with ESPN having a mess at the end.

While a Friday night power outage delayed SPEED until Saturday afternoon for the Camping World Truck Series race, ESPN got the Nationwide Series event underway as planned on Saturday night.

This is an off-week for many NASCAR personalities as everyone catches a final breath before the long push to the end of the season in November. ESPN's "A Team" of Marty Reid, Dale Jarrett and Andy Petree were all off this weekend.

It was Dave Burns who got the call to handle his first play-by-play assignment with ESPN veterans Rusty Wallace and Ricky Craven alongside in the TV booth. On pit road were Dr. Jerry Punch, Shannon Spake and Mike Massaro.

While NASCAR continues to ponder changes, the Nationwide Series continues to be the playground of the fulltime Sprint Cup Series drivers. On this day Kevin Harvick, Carl Edwards and Brad Keselowski were the show.

Burns on-air performance was solid, but it was Craven who again stole the telecast with his sense of calm and outstanding analysis. Wallace was off-balance at first, but he settled down when it was clear that Craven was not going to try and one-up him with comments.

It's always great to have Punch back on pit road and his interviews with several of the Nationwide "regulars" really put that in perspective. What ESPN did not understand for several years is that having Punch interview you is an honor for a young driver. That was made clear Saturday.

Massaro hosted a chunk of the pre-race show from the starting grid and Spake has made remarkable progress in returning to the sport this season after her maternity leave. These two multi-talented personalities are ESPN's utility players.

While the race featured several interesting moments, it was the action on the last lap that will be talked about for the week. After Harvick was eliminated in a late crash, Keselowski and Edwards were left to battle it out. The rest is history.

Burns called the action as Keselowski tapped Edwards through Turns 1 and 2. It looked like ESPN was going to get a door-to-door sprint to the finish but that never happened. Edwards turned left off Turn 4, hooked Keselowski and spun him out.

As Burns struggled for the right words, the rest of the field tried to dodge Keselowski's car on a frontstretch with walls on either side. Things did not work out very well in that regard. Keselowski's car was demolished after being hit broadside while sitting motionless.

The TV pictures changed excitement to concern very quickly. Even as the Edwards crew conducted an ill-advised celebration on pit road, there were lots of wrecked race cars on the frontstretch. Eventually, Keselowski emerged unharmed.

Craven and Wallace had a tough time originally while waiting for the replays from the ESPN producer. Craven thought Edwards had botched a cross-over move and Wallace was unsure just what happened. It became apparent quickly that Edwards had purposefully taken Keselowski out.

This is a tough spot for Wallace. He owns and operates a two-car team in the very series that he describes on TV. He is a former Penske driver. His son has been involved in many accidents in the series. Despite what ESPN maintains, Wallace cannot simply speak his mind in a situation like this.

Craven continued to work his way through carefully, but Edwards' interview in Victory Lane took away all doubt that this was an accident. Edwards' bold statements that he took something away from Keselowski and that he was simply not going to let him win changed everything. Edwards dared both ESPN and NASCAR to react. ESPN passed.

Perhaps for viewers, seeing the real emotion of Brad's father Bob outside of the Infield Care center put things in a new perspective. The reality of racing was made all too clear with his words of anger and revenge. "He's not going to kill my boy," he said. That is a pretty simple concept to understand.

In the end, ESPN missed an interview with the younger Keselowski on the race telecast but followed up shortly after on ESPNEWS. Leaving the air, both Wallace and Craven hinted at an official NASCAR response, but that made little sense as Edwards celebrated in the background. He had the checkered flag.

Perhaps you could share with us your thoughts on this telecast and how ESPN handled the final lap accident? To add your opinion, just click the comments button below. This is a family-friendly website, please keep that in mind when posting. Thanks for stopping by.
Posted by Daly Planet Editor at 1:30 AM 38 comments: