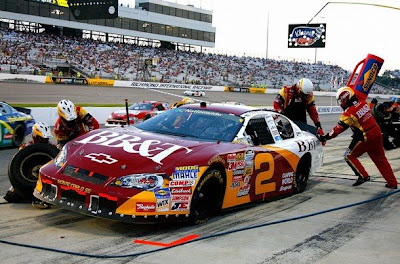 This may well be an outstanding Friday to record the daytime shows on SPEED. NASCAR is coming to this race after the amazing finish at Talladega and the tragic death of a media legend.

It will be Mike Joy front-and-center as SPEED comes on at noon ET with early Sprint Cup practice. There is little doubt that the topics mentioned above will dominate the early portion of the telecast, as perhaps they should.

Darrell Waltrip and Larry McReynolds will be on-camera for the first time reacting to the passing of their friend David Poole. Also involved as reporters for this session will be veterans Dick Berggren and Matt Yocum. Their thoughts and the interviews they conduct will set the tone for the remainder of the day.

This is a marathon Friday for Joy. He will also handle the second Cup practice session at 2PM with his Fox crew and then join Hermie Sadler and Phil Parsons for Nationwide qualifying at 4PM. To conclude his day, the NASCAR on Fox gang returns and Joy hosts Sprint Cup qualifying at 5:30PM.

When ESPN2 steps into the picture at 7PM for the Nationwide Series race, it will be Rusty Wallace up in the booth calling the action as Dale Jarrett has the day off. Wallace will be joined by Andy Petree and play-by-play announcer Dr. Jerry Punch.

Pit road reporter Vince Welch is also off, so Dave Burns, Shannon Spake and Jamie Little will handle all the action from pit road.

Once the Nationwide Series race is over, Trackside appears on SPEED at 11PM. Brian Vickers, Sam Hornish and Kurt Busch are the scheduled guests. Steve Byrnes hosts this hour with Waltrip, Jeff Hammond and McReynolds as the panel.

This is a very long day and in the early portions of practice there should be several opportunities for various NASCAR personalities to address both the passing of Poole and the mood in the garage after the Talladega accident. On this Friday, there is certainly plenty to talk about in NASCAR.

The full Richmond weekend schedule with all the TV details is posted on the right side of the TDP main page.

This post will serve to host your comments about the Friday TV coverage from Richmond. There will be a new post up for comments on the Nationwide Series race.

To add your TV-related opinion, just click on the comments button below. There is nothing to join and we do not want your email address. We just want to know what you think of the SPEED coverage on Friday. This is a family-friendly website, please keep that in mind when posting.

Thanks for taking the time to stop by The Daly Planet.
Posted by Daly Planet Editor at 10:00 PM 35 comments:

Have You Seen Carl Edwards On TV? 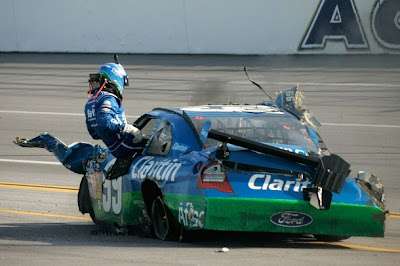 The Carl Edwards national TV tour is ending with an appearance on Thursday's NASCAR Now at 5PM on ESPN2.

How, why and what exactly all of this is about has started a lot of discussions. Larry King Live, Ellen, The Morning Show and other national TV programs talked to Carl and again rolled the Talladega footage over-and-over.

As King said when introducing Edwards, "let's see it again for the 750th time!"

If you have seen Carl Edwards on these TV appearances, could you share your opinion of what you think all this is really about? Publicity for NASCAR at a time when TV ratings are down? A personal agenda for Carl? A good agent?

For decades NASCAR drivers have been involved in accidents at various tracks that resulted in spectacular TV footage. Is that a reason to hit the talk-show circuit?

Perhaps, NASCAR Now host Mike Massaro will ask Carl about this week and how he wound-up traveling the country simply because he crashed into Brad Keselowski. When Carl turned teammate Greg Biffle in an earlier race at Talladega and caused a tremendous accident that affected the seasons of many teams, there was nary a mention of it on any of the programs listed above.

It was also noted that Matt Kenseth, who took a big tumble on Saturday in the Nationwide Series race, was not seated alongside of Carl on any of these TV programs.

If you saw Edwards appear somewhere we missed, just tell us right in the comments section. This is a family-friendly website, please keep that in mind when posting. Thanks to Getty Images for the Talladega pic, click on it to see it full-size.

TDP readers are great! Thanks once again for sharing your opinion on this topic.
Posted by Daly Planet Editor at 7:00 PM 57 comments: 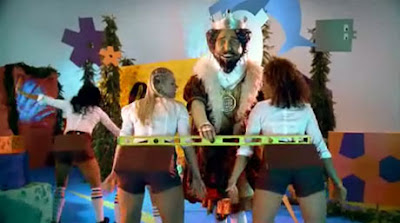 When Burger King switched to the new creepy King as their spokesman, it certainly was a radical change for the fast-food giant. The new advertising spokesman was a real man with a huge headpiece that made him a cross between a junior college mascot and a bad Halloween costume.

Now, there is a new ad campaign involving Burger King that has upset some NASCAR fans. Most of them are female and they have been making their views known across the Internet and also in the TDP emailbox.

Click here for an article from AdWeek about the new TV advertisements. Somehow, Burger King has crossed SpongeBob SquarePants with Sir Mix-A-Lot and come up with one of the most tasteless commercials in recent history.

The ads are actually promoting the Burger King giveaway of a SpongeBob toy. That simple message, however, is wrapped in an endless procession of dancing young women bending over to show their square-butts. For those old enough to remember the original Sir Mix-A-Lot video from 17 years ago, the BK version is certainly...interesting.

The topper is the creepy Burger King himself who wanders around with a measuring stick and at one point measures two big square-butts. Remember, this is a giveaway of a free toy for children, not an adult product or service. This commercial is supposedly aimed at the kids who watch SpongeBob and their parents. Needless to say, the complaints have been piling up.

"This commercial is intended to show that even adults can have fun, laugh and be silly with entertainment genres -- such as rap and pop-culture icons -- that have become part of everyday life."

That explanation might fly if not for the ill-advised conclusion of the commercial. Sir Mix-A-Lot makes a cameo appearance and utters the now infamous line that pushed many parents over the edge and put Burger King on the hotseat.

"Booty is booty," says the now 45 year-old former producer and rapper. That sound you hear is the official BK explanation crashing to earth.

In the Sunday Talladega race, the commercial spot in question aired on Fox multiple times. While the ad does not violate any broadcast TV guidelines, it certainly sends multiple mixed messages depending on the age and sex of the TV viewer watching it.

NASCAR has long prided itself on having a significant amount of female fans and works very hard to keep them. Many purchasing decisions are generated by the female head of the household and product loyalty is a term that NASCAR promotes at every opportunity.

Perhaps, dancing women in spandex with phonebooks in their shorts are not exactly the way to motivate adult female NASCAR fans to go to Burger King.

The adult references in the ad are also heard by young NASCAR TV fans who only know SpongeBob as a funny cartoon character who makes them laugh.

Either way, NASCAR TV continues to offer the phonebook shaking booty queens on a regular basis in racing content and NASCAR-themed shows. It seems the only real way the effectiveness of the ad campaign is going to be measured is at the front counters and drive-thru's of Burger Kings nationwide.

Thanks for taking time out of your day to stop by The Daly Planet.
Posted by Daly Planet Editor at 9:00 AM 90 comments: 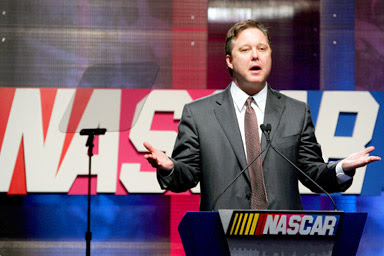 Now that NASCAR has made it official, plans are being formulated for the first post-season banquet week in Las Vegas, NV. NASCAR Chairman Brian France recently issued a statement on the move.

"I can't say enough about the warm reception from Las Vegas," said France. "Las Vegas really made it a priority to get the awards ceremony moved there. We were able to come to an agreement on reasonable room blocks, banquet facilities, and approvals to hold fan activities on the famous Las Vegas Strip."

France's comments suggest that the new look post-season activities may have little resemblance to the dated and scripted banquet televised each season on the ESPN networks. France himself seemed to show little interest in this function on TV and made cameo appearances that were painfully awkward.

Now, NASCAR has a blank canvas and seven months to get it painted. While that may seem like a lot of time, it is painfully short where both event planning and TV production are concerned. This is especially the case because of two small words in France's statement. They are "fan activities."

The biggest shift in the post-season party could be the inclusion of NASCAR fans. This season a trip to Las Vegas is more affordable than ever before and the potential exists to create an entirely new vibe for the drivers, teams and sponsors once the season is over.

TV viewers have seen the kind of blanket coverage SPEED has offered for the All-Star Race and other special events. ESPN has originated many NASCAR specials on-location at places like the Richard Petty museum, DEI headquarters and Daytona International Speedway. The potential exists to change the post-season TV coverage that has been a disaster since the new TV contract began in 2007.

Dreamers may look to large events like the X Games or the ESPY Awards. Realists may strive to preserve the tuxedos and the ballroom setting. In actuality, the opportunity to create a TV-friendly post-Homestead destination loaded with a combination of fan activities and team relaxation is very possible.

As we approach the halfway point in the season, it should be interesting to see what details start to emerge about the ideas being discussed for this first-time project.

Since TDP has luckily been able to get a great collection of NASCAR fans as readers, what are your suggestions for some post-season fun in Las Vegas? Tell us what you would like to see on TV for the awards ceremony and also what activities would get you interested in traveling to Las Vegas on December 4th?

To add your opinion on this topic, just click the comments button below. This is a family-friendly website, please keep that in mind when posting.

Thank you for taking the time to stop by The Daly Planet.
Posted by Daly Planet Editor at 8:30 AM 21 comments: