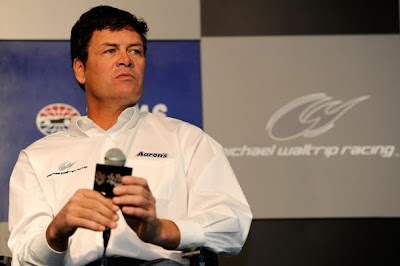 Update: This topic has generated a lot of conversation and comments here, on Facebook and Twitter. Leaving it up as the lead story.

The NASCAR on FOX gang will be returning the core group of on-air talent for this season's coverage, but there will be one significant addition.

Michael Waltrip will take a seat in the Hollywood Hotel beginning with the Daytona 500. His role will be to appear on the pre and post-race shows, as well as providing analysis as needed during the race. In the event of rain, Waltrip and infield host Chris Myers will quickly become the show.

Moving aside is Jeff Hammond, the NASCAR on FOX on-air personality perhaps most identified with this infield position. This season, Hammond will become a roving reporter and has said he was absolutely fine with the change.

In 2011, FOX-owned cable TV network SPEED paired Darrell and Michael Waltrip in the TV booth for several races. The family dynamic between the two was interesting and the FOX executives loved the result.

"Michael is simply one of NASCAR’s most gregarious, genuine personalities and we loved the dynamic between him and Darrell when we paired them up on occasion last season," said FOX Sports Media Group Executive Producer Eric Shanks in a release.

"Michael has also been featured in numerous television commercials over the last decade, which makes him familiar to a much broader audience," continued Shanks. "I expect a lot of ‘gotta see’ TV coming out of an all-Waltrip Hollywood Hotel next season."

Shanks also made it clear that Michael Waltrip will remain in the Hollywood Hotel during and after the race. Waltrip will not be attending to his multi-car team duties, but dedicating himself to providing analysis for the full TV telecast.

This means that Mike Joy and Larry McReynolds in the TV booth will have to deal with the sometimes overbearing presence of Darrell Waltrip upstairs and now the powerful and very vocal media personality of Michael downstairs.

"The TV Lightning Rod" was a post from last season. We discussed the much more emotional and sometimes out of control aspects of Darrell Waltrip's last two seasons in the booth for FOX. Click on the title to read the entire post.

"Waltrip Negotiating To Purchase Red Bull Racing" is a post from Dave Moody's Sirius Speedway blog. Click on the title to read the story. This is part of the very real issue on the NASCAR on FOX table.

The younger Waltrip is actively involved as a multi-car Sprint Cup Series team owner. He will also drive a limited schedule in the series, focusing on restrictor plate races. Waltrip-Pastrana racing will run at least seven Nationwide Series races in 2012 with driver Travis Pastrana. Waltrip's K&N East team appears to have been shut down for this coming season due to lack of sponsorship.

The younger Waltrip has been embroiled in the normal controversies involving changes of personnel, driver contracts and sponsor issues for years now. His off-track issues are well-documented and his continuing presence on social media outlets is legendary. His tweets tell the story of perhaps a lonely man, working hard to establish his place in the sport and reclaim happiness in his personal life.

Against this complicated backdrop comes the most challenging television assignment of his career. A veteran analyst on SPEED's Camping World Truck Series telecasts, Waltrip has plenty of practice up in the broadcast booth. On FOX, however, after his time in the pre-race show is done his role will be quite different.

This time, Waltrip will literally be waiting in the dark for an opportunity to add his opinion into a telecast that already has his older brother squarely positioned as the star of the show. There is little doubt that the on-air dynamic at FOX will be significantly different than it had been with Hammond in that position.

SPEED indicated years ago that the reason it was permissible to have Waltrip in the truck series TV booth is because he did not own any teams in that series. There could be no claims of favoritism, questions about his agenda or suggestions that his comments on other teams were motivated by an ownership perspective.

Now, the new management at FOX Sports is brushing aside those issues and banking on the fact that the reaction to the younger Waltrip, both good and bad, will lead to a bump in the TV ratings. Despite the PR spin of last season, NASCAR TV ratings are far below the popularity of the sport only four or five years ago.

The point is well taken that the senior Waltrip will be 65 years old in February and has been doing this for a very long time. FOX is beginning the final three years of an existing TV contract and will be opening negotiations with NASCAR this year to determine the network's role in the future.

It may well be that Shanks is investing in what he sees as the potential successor to be the lead announcer for NASCAR on FOX. Should the network continue in the sport, the younger Waltrip will have three seasons of experience under his belt and perhaps the torch will simply be passed within the same family in 2015.

We welcome your thoughts on this topic. To add your opinion, just click on the comments button below. TDP does not allow profanity, hateful speech or derogatory comments. Please do not post links to other websites. Comments will be moderated before posting. Thank you for taking the time to stop by The Daly Planet.