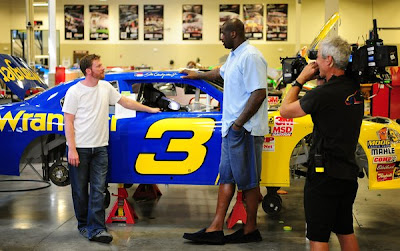 Dale Earnhardt Jr. had a primetime TV moment on the Shaq vs. show on ABC Tuesday night. Love to get your comments on how you felt this worked for Junior and also for the sport.

Jack Arute informed us that he will be calling the play-by-play on the new NASCAR Modifieds TV package for VERSUS. The surprise was that Jimmy Spencer is going to be alongside of Arute providing the analysis. Click here to read the details and take a look at the rest of the Mods schedule on TV.

Saturday's Pocono truck series race on SPEED wound-up #2 in basic cable for that timeslot, only losing out to King Kong on TNT. The ARCA rating was also good on the weekend where SPEED announced it had extended its agreement to televise ARCA races through 2011.

Rutlege Wood is off to Los Angeles this weekend to work on the new Top Gear program that is coming to the US on The History Channel. Wendy Venturini will take his place on the infamous NASCAR Smarts program. Click here to review the details of the new 10 episode series. SPEED's Tanner Foust from Supercars Exposed and Adam Ferrara from FX's Rescue Me are Wood's co-stars. The series is slated to debut this fall.

Next week SPEED's Race Hub series goes on the road, but not very far. The show is stepping out of the studio so it can be revamped with a new set. The schedule is Monday at JGR, Tuesday at Roush Fenway, Wednesday at Penske and Thursday at Hendrick Motorsports. This show has come a long way and now with the new one-hour format, it deserved a better studio set.

Despite the strong performance of Ricky Craven and Ray Evernham, ESPN will not be taking a second set of announcers to Watkins Glen. Marty Reid, Dale Jarrett and Andy Petree will be handling both the Sprint Cup and Nationwide Series duties. In the past, that has made for some tired announcers by the time Sunday afternoon rolled around. This trio will handle practice and qualifying for both series in addition to the races. Coverage jumps back and forth between ESPN and ESPN2, so reference the TV schedule on the left side of the TDP page.

ESPN executive John Skipper has said in recent interviews that changes are coming to ESPNEWS and ESPN Classic network. Once again this past weekend, ESPN Classic was used to host the pre-race and early race portions of a NASCAR telecast. As the college football season closes in, viewers know the Nationwide Series telecasts will once again be sandwiched in between football games. Hopefully, ESPN will identify a viable television or online source that can present the Nationwide telecasts from start to finish for fans of that series.

Fans should note that Nationwide and Sprint Cup Series qualifying sessions this weekend are back-to-back on Saturday from Watkins Glen beginning at 9AM ET. This is the road course format, so things should be a bit more interesting. Don't forget, there is also a CWTS race from Nashville on Saturday night. Pre-race starts at 8:30PM on SPEED, the race is at 9PM ET. No early coverage is offered.

Please feel free to leave us your comments on the topics mentioned above. To add your opinion, just click on the comments button below. This is a family-friendly website, please keep that in mind when posting. Thanks for taking the time to stop by The Daly Planet.
Posted by Daly Planet Editor at 10:30 PM 42 comments: