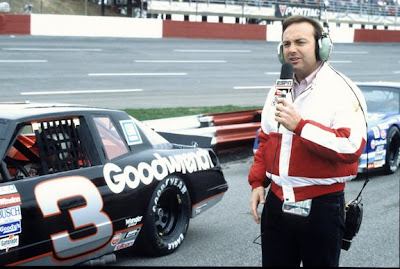 The Worldwide Leader had run out of options. After stepping back into the sport in 2007, ESPN had run up a long list of spectacular failures in almost all areas of NASCAR television for three straight seasons.

Studio shows, Nationwide Series races, NASCAR on SportsCenter, the Chase for the Championship, it didn't really matter. The NASCAR on ESPN effort had been one of the most significant sports television failures in the thirty year history of the company.

Names like Erik Kuselias, Brent Musburger, Tim Cowlishaw and Suzy Kolber only serve to make veteran fans shake their heads. Last season, things were in such disarray that ESPN actually telecast several races without anyone in the play-by-play role. Four color analysts just sat around talking. ESPN called it "Backseat Drivers." It was some of the most embarrassing NASCAR television coverage in history.

The darkest point in 2009 came during the Chase. The meltdown of Jerry Punch was complete. The pit reporters were lost. The Director alternated between the leader of the race and Jimmie Johnson. Tim Brewer continued to talk about shocks and tires as if TV viewers had just landed from Mars. The fans were screaming, NASCAR was screaming and the TV ratings were horrible.

Music videos, fancy graphics and in-house announcers from other sports were imported to NASCAR. Disney movies, recording artists and other ESPN TV shows were featured in NASCAR programs. Who can forget live X Games interviews and promo's from the Infield Pit Studio with NASCAR racecars zooming by in the background at full speed.

The result of this approach was an immediate alienation of the fan base. NASCAR had been doing just fine without ESPN for a decade. Now, the network had returned and suddenly ESPN wanted to be the show. NASCAR often seemed to simply be in the way.

Ultimately, there was only one way to solve these problems. That was to look to the past. Before the angry split, NASCAR and ESPN had a rich history of cooperation and growth. This season, ESPN has slowly pushed itself back in time to rediscover the roots of that success. At the core of this effort are some familiar names and faces.

The lead voice on pit road now belongs to Dr. Jerry Punch. Back where he belongs, Punch sounds every bit like the excited and informed reporter that fans had come to know in the 1980's. Punch's return this season has raised the level of pit road reporting from the entire ESPN team. The fan reaction has been wonderful.

Cool and collected is the presence of Allen Bestwick on TV. After quietly moving up from pit road, Bestwick established himself as the island of calm in the middle of ESPN's NASCAR storm. Last season, Bestwick put this franchise on his back and did most of the heavy lifting. At times, his infield role seemed to be putting the pieces of a shattered telecast back together for the viewers. Now, that has all changed.

With Punch back on pit road and Bestwick anchoring from the infield, attention turned to the broadcast booth. When that door swung open, Marty Reid walked in. No one has had a bigger effect on ESPN's NASCAR coverage than Reid. Suddenly, the excitement is back and what is happening on the track is the focus of the telecast.

This alignment of Reid, Punch and Bestwick has served to cement a foundation that NASCAR on ESPN has never enjoyed until now. As a result, the supporting cast of characters has slowly come alive this season. These changes must be such a relief to many of them.

Dale Jarret is finally free to be an analyst with the burden of helping Punch call the race now lifted. The same is true for Andy Petree, who can finally focus on race strategy and information. This season will also see Rusty Wallace, Ricky Craven, Randy LaJoie and Ray Evernham make their way through the broadcast booth.

In a very smart move, ESPN will also put Dave Burns and Vince Welch at the helm of one Nationwide Series telecast to see what they can bring to the table in the play by play role. Speculation is that ESPN may split broadcast teams when the network begins to cover both the Sprint Cup and Nationwide Series races.

For the first time in a long time, ESPN looks like it is putting all the pieces in place to rebuild the coverage of the sport. Reid returns in Phoenix on Friday night with Wallace and Petree alongside in the booth. After an outstanding effort in Nashville, ESPN could be poised to keep the momentum going in the desert.

We welcome your comments on this topic. To add your opinion, just click on the comments button below. This is a family-friendly website, please keep that in mind when posting. Thanks for taking the time to stop by The Daly Planet.
Posted by Daly Planet Editor at 7:00 AM 40 comments: