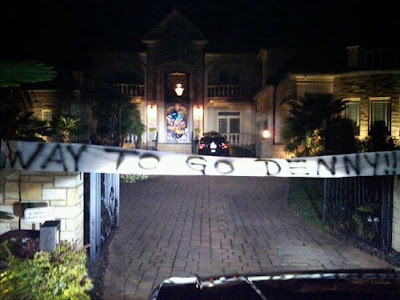 The biggest growing movement in NASCAR does not involve the COT, the Chase or even the pink Martinsville hotdogs. Instead, it is the groundswell of teams, drivers, bloggers, reporters and officials who use Twitter to get their messages out to the fans instantly.

The social media revolution is in full swing in NASCAR and growing by the day. Race winner Denny Hamlin has only been active on Twitter for several months, but he has become a regular user. Sunday, he drove home the point about the importance of this technology.

Hamlin thanked his Twitter followers on TV from Victory Lane, then sent the following message minutes after the race. "That's what I'm talking about!!! Whooo!! I told ya we would win another!" tweeted Hamlin.

After a quick ride home once the Victory Lane TV, radio and print media was done, Hamlin had another surprise. His house had been draped with a homemade banner celebrating his win. So, what did he do? Snapped a pic and sent it to his almost five thousand Twitter followers directly. That is the picture above. Just think about that.

Meanwhile, Juan Pablo Montoya finished third and got done with his post-race media rather quickly. Montoya is one of the most popular NASCAR drivers on Twitter and has about 30 thousand who follow him. Instead of the hard-charging driver, fans see a family man with a wicked sense of humor who likes to fly RC planes and windsurf.

"Had a good day in the office!!!" tweeted Montoya. "The team keeps doing an amazing job again that is really nice to see!!!!" Later, he arrived back home in the Miami, FL area. "Back to reality, laying in bed with the kids and we are watching TV."

While these examples happened after the race, what was in-progress before and during the race itself was amazing. SPEED's Wendy Venturini, Hermie Sadler and Kenny Wallace are all on Twitter and offer live updates during the RaceDay program about interviews, guests and behind-the-scenes tidbits. Once the race gets underway, the information really starts to fly.

Multiple reporters were updating the details of the race live from the Martinsville press box and media center. NASCAR itself was tweeting leaders, penalties, updates and information. Bloggers like me had running Twitter conversations that included thousands of NASCAR fans. Jayski and other NASCAR websites are also updating live on Twitter during and after each race.

All of this takes on an entirely new meaning due to the absolutely horrible race coverage being provided by the distant and disinterested ESPN production team. Fans desperate for NASCAR information have flooded Twitter and found salvation.

Here is the info on who NASCAR is warning, who got a lap back, who is racing hard and what is actually going on in the entire race. ESPN's microscopic focus on Jimmie Johnson and the race leader becomes almost comical when the Twitter feed is rolling with the live race. So much information never makes it on TV.

It was Kyle Petty who made a Twitter believer out of me. This summer, Petty interacted with fans during the live TNT races through Twitter. During one race, he answered a question on the air I had sent to him directly moments earlier. Then, in the next commercial, he sent me a message asking if that was the answer I wanted. Needless to say, an entire new world of communication possibilities was opened right in front of my eyes.

If ESPN let Allen Bestwick and Brad Daugherty use Twitter from the Infield Pit Studio while they sit there and wait for a break in the action, the telecasts would change tremendously. If a Stage Manager in the TV booth took Twitter questions, Jerry Punch would perhaps not continue to call out car numbers, driver names and hometowns for three hours.

Many fans told me they are using ESPN/ABC for the video only with the audio muted. They are actually listening to the radio call of the race and keeping updated with live online scoring and Twitter. That shuts out the ESPN broadcast team entirely and should be a big wake-up call for that TV network.

One thing is for sure, Twitter is exploding with NASCAR content. From the sophisticated presence of teams like Hendrick and Gibbs to the often hilarious updates from driver's wives, Twitter offers a wave of NASCAR information that is free, easy to access and portable.

Think about accessing Twitter for the remaining races if you have not given it a try. There is nothing hard or complicated about it, especially if I can do it. Head to Twitter.com and just start a free account.

We are at twitter.com/TheDalyPlanet and you can find tons of NASCAR folks simply by typing NASCAR into the "Find People" search box.

Let's use this post for those using Twitter already to talk about your NASCAR experiences. We can also help anyone who has questions or has heard bad things about Twitter being complicated or worthless. Nothing could be further from the truth.

To add your opinion on this topic, just click the comments button below. This is a family-friendly website, please keep that in mind when posting. Thanks for taking the time to review this column and for stopping by The Daly Planet.
Posted by Daly Planet Editor at 1:00 AM 64 comments: