Your Turn: Sprint Cup Series From Daytona On TNT 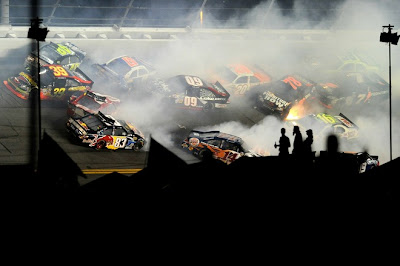 After a 90 minute rain delay, the Coke Zero 400 got underway from the Daytona International Speedway.

Lindsay Czarniak hosted the pre-race show with Kyle Petty and Larry McReynolds. The feature was on the late Dale Earnhardt Sr. and McReynolds played a key role with his comments. Tony Stewart was interviewed on the set.

When the rain came, the network stayed in Daytona and did not use any filler programming. Czarniak anchored the coverage and the pit reporters worked very hard with multiple interviews. Outstanding cooperation from the drivers in terms of making themselves available for TNT and the online RaceBuddy.

Once the race began under caution, the tone from Adam Alexander, Kyle Petty and Wally Dallenbach Jr. in the TV booth was fun and excited. As the new commercial format began to play out, Alexander slowly returned to his pit reporter personality.

The Wide Open coverage makes Alexander direct a lot of traffic and read a lot of scripted copy in addition to calling the race. In this case, it took any excitement out of the play-by-play role. He was busy with a lot of details and it affected the telecast.

Petty and Dallenbach found themselves interrupted a lot for commercial breaks. In this case, they had to continue to watch the race on the screen as the Wide Open commercials played in a video box. This resulted in a rather disjointed commentary stream from the analysts.

Petty continued to interact with fans through Twitter during the entire race. He also continues to be the star of this show. His opinions and honest comments again served the coverage well. Dallenbach was supportive, but this type of racing is not his area of expertise.

TNT's pit reporters had quite a race. Ralph Sheheen confronted Kyle Busch and got a solid answer on his incident with Juan Montoya. Marty Snider and Matt Yocum both did solid work in the rain delay and then the race. Unfortunately, Phil Parsons continues to be a fish out of water in the pit reporter role.

RaceBuddy offered another view of this race with pit reporting from Jim Noble. He did a fantastic job alone of covering this event live for more than six hours. Noble has been wonderful on RaceBuddy and it is clear the drivers enjoy speaking with him.

The race was marred by a huge late race caution and red flag that affected most of the field. It ended in bizarre fashion with far fewer cars remaining in the event. The dark side of restrictor plate racing returned with less than 20 laps left in the race.

The TNT technical team made very good pictures and sound. There were no weather problems once the race was underway. Coverage ended well over an hour later than originally scheduled.

This is your opportunity to post a race wrap-up comment about the TNT coverage of the Sprint Cup Series race from Daytona. To add your opinion, just click on the comments button below. This is a family-friendly website, please keep that in mind when posting.
Posted by Daly Planet Editor at 12:20 AM 49 comments: