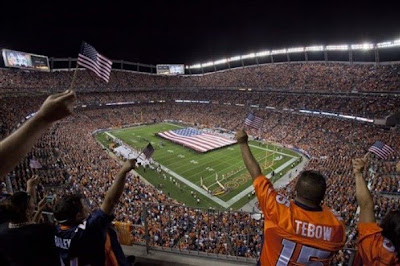 It's that time of the year again for NASCAR. Sunday afternoon, the Sprint Cup Series will go head-to-head with the NFL for TV ratings. It's a moment of choice for fans of both sports.

While the action from the Saturday night race in Richmond was certainly an attention-getter, the NFL also had a memorable opening weekend. This is the time of the season when ESPN is alone in presenting the Sprint Cup Series races.

It's a tad ironic that ESPN just unveiled a massive new NFL TV package. It has already resulted in new programming on multiple ESPN networks and substantial expansion of existing series. ESPN and the NFL have cemented a relationship that will exist for a very long time.

This was also the week that ESPN2's NASCAR Now, the only NASCAR-themed program on any ESPN network, was relegated to the 3PM Eastern timeslot. Even the later airing for West Coast viewers was cancelled. Since 2007 this series has aired on weekdays at 5PM ET.

Last year we had this discussion and found many NASCAR fans to be upset. While the Chase for the Championship format was designed to counter NFL interest, it was not the Chase fans disliked. Instead, it was the way ESPN covered the final ten races of the Sprint Cup Series season.

Fans of drivers outside of the Chase found no TV coverage of those teams, unless the car was leading the race. Literally from the time the green flag fell there would be four hours without a full field recap, any reference to non-Chase teams or even updates on how non-Chase drivers got to where they were running on the track.

Often, drivers would seemingly appear from nowhere to win the races. It was a fundamental disconnect between a TV network covering a Chase and fans who were watching a race. Nothing could shake ESPN from focusing on the top Chasers for the entire telecast.

One basic truth about the NASCAR fan base was seemingly missed by the ESPN production team. Fans do not change driver favorites when the Chase starts. That group of fans wearing Kasey Kahne, Greg Biffle or Mark Martin gear wants to be provided the same amount of information about those teams as they have been all season.

The argument that the Chase drivers deserve the lion's share of the TV coverage has been proven wrong by the disastrous TV ratings and negative fan response over the last four years. Time and time again, it's been suggested that ESPN take the Chase races and simply produce them as events, letting the scoring ticker and the pit reporters handle the Chase point updates.

One new wrinkle brought to the table by ESPN this season is the side-by-side commercial format. Branded as NASCAR Nonstop, the new format will be used for the second half of each Chase race. The first half of each race will feature full-screen commercials as usual.

This is at least a bow to one of the biggest problems TV has with the sport. In order to pay for the races, the Sprint Cup Series networks have to hammer commercial breaks into live events without being able to stop the action. NASCAR Nonstop is at least a first step that will hopefully convince ESPN to use this format full time for 2012.

The other big advantage for ESPN is the presence of Allen Bestwick. Love him or hate him, Bestwick is superb at directing traffic on the air and working to keep fans updated on the information about the race. This will be his first time trying to walk the tricky line of the race vs. the Chase.

It really helps to have someone in the lap-by-lap announcer position who has direct experience in the role. That is something Dr. Jerry Punch and Marty Reid did not. It was a bold move by ESPN just days before the network's Sprint Cup Series coverage began to move Bestwick into the TV booth. We will see on Sunday if it pays off.

What is your mindset as you try to make the decision about Sunday TV viewing? Putting aside the usual complaints about the Chase, Brian France and Junior how about sharing with us what you will be watching on Sunday and why.

To add your opinion on this topic, just click the comments button below. Thanks for taking the time to stop by The Daly Planet.