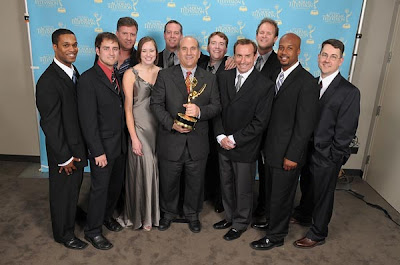 There were big expectations for the NASCAR Media Group (NMG) when it was formed in 2008. The man in the center of this photo, Jay Abraham, was named Chief Operating Officer. NASCAR had combined its broadcast, digital and images divisions into one entity. Sports Emmy Awards followed for a variety of series, specials and TV movies.

Click here to review a 2009 NASCAR.com article about the company. You may notice that there is a theme throughout the story. That is the desire for a dedicated NASCAR TV network.

"For NASCAR to consider its own network, I think that's a smart investigation," said Mark Lazarus the former Turner Sports chief in the article. "It's smart in terms of controlling their content, but also because of their fiduciary responsibility to the industry, teams and tracks."

"We wanted more control over the process of creating and distributing our content," said Abraham at the time. "With what we're building, with a very small incremental investment, we could become our own TV network if we wanted to."

But instead of moving forward with TV network plans, NMG continued to simply be a program provider. The company eventually became dependent on one TV network as the major client. That network was SPEED.

Here are some words about the network's relationship with NMG from the 2009 article:

SPEED, in more than 75 million homes, serves as a de facto NASCAR network already with exhaustive coverage through the week and on race weekends. NMG provides content for seven or eight shows a week and calls SPEED easily its biggest client.

The fly in the ointment was that NASCAR did not have an ownership stake in SPEED and therefore did not have a say in the strategic direction of the network. That direction took a sudden turn when the network dropped all NASCAR programming on Monday through Thursday and moved toward a new goal.

Click here for a 2009 CableU.tv interview with SPEED VP Robert Ecker. Here are some excerpts:

CableU: What programs and/or genres are you looking for in the next year?

CableU: What is the key element that makes a program right for your network?

Ecker: Well, clearly we live and breathe the automotive genre, so any non-event program we commission generally has to have a minimum of two tires and a combustible engine. Beyond that, in the original program category we are primarily interested in automotive lifestyle shows that have a combination of the following five elements – adrenaline, competition, cars, bikes and girls.

Needless to say, this ended NMG's ability to produce weekday NASCAR series for SPEED. Other than the Friday through Sunday productions from the Sprint Cup Series tracks, SPEED turned away from NASCAR and set a weekday course for reality TV series rebranded as "automotive lifestyle" programming.

While NMG had pitched NASCAR-themed programming to other cable and broadcast networks, the reality of paying for shows without getting any live races made it a struggle. The picture above was an Emmy award presented for one of the former SPEED series that NMG wound-up producing for the short-lived VOOM HD Network.

This year, NMG was informed by Showtime that the network wanted out of its current contract for the high-profile Inside NASCAR series. That basically ended the original NASCAR programming being produced by NMG away from the tracks.

As the overall NASCAR business began to suffer, NMG had gone out and solicited other sports programming to produce. It began to become involved with college athletics and produced a variety of non-motorsports series. But as the years went by, it became clear things were not going well.

Tuesday the end came for Abraham and NMG. Brian France announced Abraham was out and a restructuring would turn NMG into the smaller and streamlined NASCAR Productions. Steve Herbst, the existing NASCAR VP who coordinates domestic and international TV rights, would also oversee the new department.

All of the non-motorsports production will end when the current contracts are over. No more college sports TV for NASCAR. ""It's the right thing that those folks are going to focus on NASCAR," said Chief Marketing Officer Steve Phelps to the Sports Business Journal. "We need to build our NASCAR audience. We need to focus on our fans. We took our eyes off the ball a bit."

Click here to read the full announcement about the changes. Three existing staff members have been put in place to manage the department. The current weekend programming on SPEED like RaceDay, Victory Lane and Trackside will continue as will the practice and qualifying coverage.

Ultimately, it's a shame that NASCAR did not chase the dream of a dedicated cable TV network when the economy was robust and the money from the current TV contract was still fresh in the bank. These days real media power lies in combining a cable TV network with digital assets.

Now streamlined, NASCAR Productions once again begins the process of trying to expand the NASCAR brand through new program series and network partners. Good luck to those taking on this challenge and goodbye to the NASCAR Media Group as we knew it. Sometimes, it seems that the only thing consistent in TV land is change.

We welcome your opinion on this topic. Comments may be moderated prior to posting.
Posted by Daly Planet Editor at 11:19 PM 15 comments: