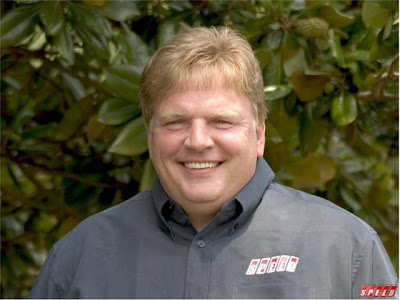 Here are some items of note this week in the NASCAR TV/media world:

Jimmy Spencer's return to SPEED was certainly interesting. On both the RaceDay and Victory Lane programs from Pocono, Spencer returned to his blunt "take no prisoners" style. Most of the email was about Spencer's post-race comments. Here are his words while reviewing the incident on pit road.

"This is interesting. There is Joey Logano's dad. He's telling him...he is antagonizing! That is a (NASCAR) fine in my eyes! Mr. Logano, you did that wrong. You should never have enticed your child to go over there because that could have been a very, very big incident. I blame Mr. Logano for that."

"I know he is young, but damn it dude, you don't never go after a person's wife or family members. You got a lot to learn, bud. Two wrongs don't make a right. You costs yourself a great finish. What you said afterward, not good."

Larry McReynolds appeared on SPEED's Race Hub Monday to discuss the same incident and instead told host Krista Voda that he is one of Tom Logano's best friends. It was nice to see a NASCAR TV personality making this disclaimer before answering a question on national TV about a touchy topic.

The Sprint Cup Series moves on to Michigan next weekend. Spencer will return to SPEED in New Hampshire. It will be FOX's Darrell Waltrip joining Kenny Wallace and John Roberts on the RaceDay panel next Sunday. Waltrip will also appear on the Trackside program Friday night.

Waltrip's new SPEED deal is for him to replace Kyle Petty at a total of four races. Waltrip will handle Michigan, Sonoma, Daytona and Chicagoland. On those weekends, Waltrip will also call Sprint Cup Series practice and qualifying. Jeff Hammond, now bumped out of the booth, will appear on SPEED's Victory Lane on those four dates.

Dale Jarrett gets the weekend off and Rusty Wallace returns to the ESPN2 TV booth as the Nationwide Series goes to Kentucky Speedway. Wallace has Marty Reid and Andy Petree alongside. Allen Bestwick handles the infield studio with Brad Daugherty.

World Cup Soccer programming means no NASCAR Now on ESPN2 this Thursday. Nicole Briscoe hosts shows at 6PM on Tuesday, 5PM on Wednesday and 6PM ET on Friday. She will also host the Sprint Cup Series preview version of the program at a new time of 8:30AM ET on Sunday.

As you may know, Parsons is Waltrip's fellow TV analyst on the truck races for SPEED. They will call the Saturday race at MIS. Parsons will then be a pit road reporter for TNT on Sunday, in the very race where Waltrip is "starting and parking" his car. Just how many lines of NASCAR media fairness can two men cross in one weekend? This might be a record.

There is no official word out on SPEED fixing the Monday night line-up. There is still a gaping hole at 8PM where This Week in NASCAR lived for over fifteen years. The 9PM Fast Track to Fame show is also apparently over, so there are two key hours to fill. Hopefully, some new and innovative NASCAR-themed TV programs will appear.

Finally, click here for reporter Michael Smith's story on the ill-fated NASCAR Wives program concept that never got off the ground last year. Instead of the reality of racing life, it seems that the TLC network wanted to create fake controversy and conflict. Imagine that. Did we mention earlier that SPEED has two hours open on Monday nights for NASCAR programming?

Happy to have your comments on these topics. Just click on the comments button below to add your opinion. This is a family-friendly website, please keep that in mind when posting. Thanks for taking the time to stop by The Daly Planet.
Posted by Daly Planet Editor at 7:00 AM 29 comments: