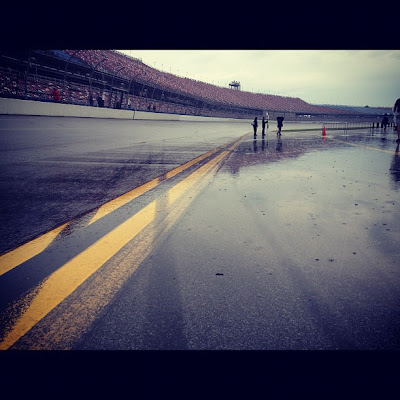 It's been a wet morning at Talladega with a consistent rain. NASCAR has advised the teams in the driver's meeting that an updated schedule will be announced at noon ET. The good news is that the rain has passed and it looks like it's just a matter of drying the track. That effort normally takes about two hours.

The usual cast of characters is along for the ride this week on FOX. Michael Waltrip is driving in the race, but will still be a part of the TV coverage from start to finish. It will be interesting to see just how much FOX uses him and in what type of a roll once the race begins.

Originally, we were told Jeff Hammond would return to his past role of being located in the Hollywood Hotel since Waltrip was racing, but things have a way of changing at FOX these days.

It's been a tough comple of weeks for Darrell Waltrip and the FOX gang. It should be interesting to see if anything changes for the coverage today once things get underway.

We will be on Twiter with the #TDP1 livestream. Just come to Twitter.com and type #TDP1 into the search box to see your conversation. Join Twitter and tag your tweets with #TDP1 to be included. Feel free to post your comments on the coverage here as well. There will be a full post here after the race for your comments.

Thanks for stopping by! Photo from Jeff Gluck via Twitter.
Posted by Daly Planet Editor at 11:37 AM 40 comments: