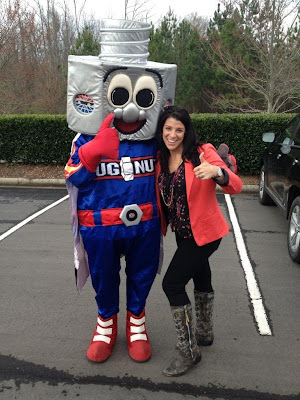 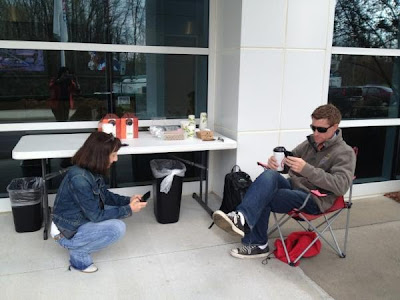 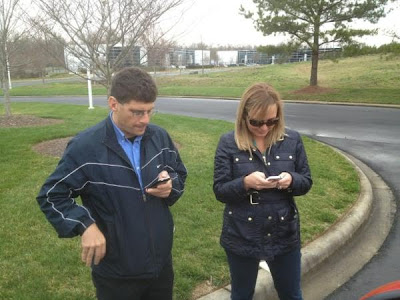 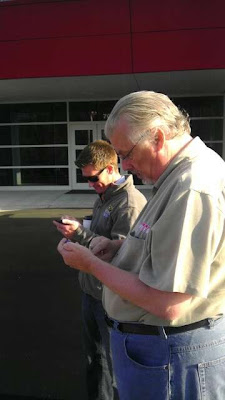 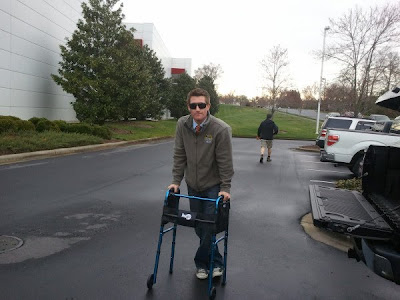 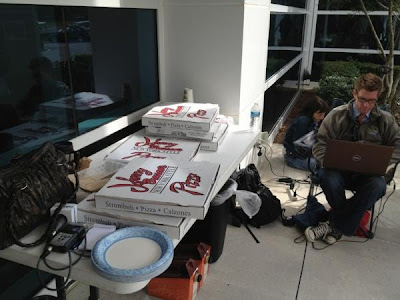 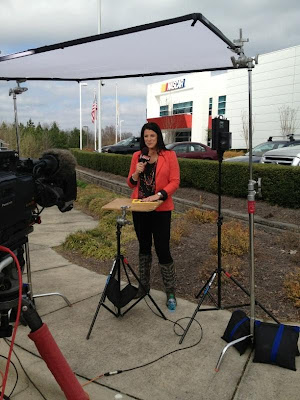 It's Tuesday so it must be time for some NASCAR penalties. Today, the appeal over the penalties levied against the Hendrick Motorsports #48 team is being heard by a panel of three at the NASCAR Research and Development Center in Concord, NC.

There is absolutely nothing for the reporters assembled there waiting for news to do other than get on the Internet and send some pictures. Here are some of them, starring your favorite NASCAR media folks.

Happy to have your comments or questions! 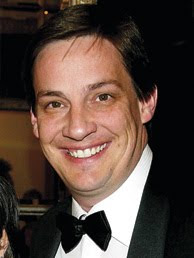 Breaking news from NASCAR on Monday. Here is the release:

NASCAR announced today that Paul Brooks, senior vice president of NASCAR and president of NASCAR Media Group, is leaving the company on May 4, 2012, to focus on a variety of personal and outside business interests. Brooks, who has been with NASCAR for 19 years, will continue as a senior advisor to the company in key areas, including broadcasting, media strategy and innovation.

“Paul’s accomplishments at NASCAR are beyond measure and have contributed significantly to the success of our entire industry over the last two decades and prepared us in many areas for future growth,” said NASCAR Chairman and Chief Executive Officer Brian France. “We are grateful for his years of dedicated service, support his decision to pursue other interests and wish the very best to Paul and his family. He will be greatly missed.”

“I have big ideas and interests that I’ve always wanted to explore and my decision to make this transition now has been well planned,” said Brooks. “It has been a true blessing to learn and grow my career working so closely with one of the most successful families in American business and professional sports. I have a deep respect for NASCAR, the France family and NASCAR President Mike Helton, and I believe the industry is positioned for future growth.”

Among his most important contributions at NASCAR, Brooks was on the initial team that developed NASCAR’s long-term consolidated television and new media agreements with FOX, FX, NBC, Turner and NASCAR TV on SPEED, and later, agreements with ABC/ESPN. Brooks also is credited with leading NASCAR’s efforts to become the first professional sports league to launch a 24-hour satellite radio channel with NASCAR Radio on XM Satellite and later transitioning to Sirius Satellite Radio. In one of the largest sponsor partnerships in sports, Brooks was a key member of the negotiating team that brought Sprint-Nextel into the sport as title sponsor to what was then the NASCAR NEXTEL Cup Series and is now the NASCAR Sprint Cup Series.

As SVP for NASCAR and president of NASCAR Media Group, Brooks assumed day-to-day responsibilities for NASCAR’s Charlotte, N.C., offices in Sept. 2007, with all broadcasting, new media, licensing and consumer products, publishing, automotive aftermarket, and international business departments reporting to him. Since that time, NASCAR Plaza, NASCAR Media Group, the NASCAR Hall of Fame and the NASCAR Teams Licensing Trust all were developed and launched.

As VP of broadcasting for NASCAR and VP of NASCAR Digital Entertainment, Brooks established NASCAR’s Los Angeles office in 2000, while overseeing all broadcasting, entertainment and new media ventures. He served as executive producer of NASCAR: Drivers 360 on FX and executive producer for the Emmy Award-winning NASCAR IN CAR on iN DEMAND, television’s first enhanced multi-channel digital sports package. Under his management, the Los Angeles office quickly became a focal point for NASCAR’s marketing, licensing, sales and communications functions on the West Coast. One of his first projects in Los Angeles was to create “NASCAR 3D: The IMAX Experience” that debuted in March 2004 and became one of the most successful film documentaries in IMAX history.

After joining NASCAR in 1993, Brooks held several key positions with the sanctioning body including VP, Office of the President, reporting directly to Bill France, Jr., then chairman and CEO of NASCAR. In this capacity, Brooks was responsible for leading long-term and operational planning for NASCAR, directing special projects and publishing, developing and launching NASCAR Online, and leading international business initiatives, including NASCAR exhibition events in Japan. Prior to joining NASCAR, his experience in the sport began in 1989 and included key positions with NASCAR drivers, teams and media outlets.

“Paul’s influence on NASCAR has been tremendous and will be felt for years to come,” said NASCAR President Mike Helton. “He led some of the company’s most important initiatives that have driven growth and prepared us to better serve the fans and the industry. Along the way, he earned respect and confidence throughout NASCAR and, in particular, from Bill France, Jr. and Brian France in their capacity as CEOs of the company. I have great respect for Paul and look forward to continuing our professional relationship, but more importantly, our friendship.”

Brooks departing opens the door for a new key executive to step-in at a time when the sport is undergoing a huge digital transition. NASCAR bought back its own Internet/digital rights from Turner Sports this year and will be in charge in 2013.

Brooks is tough to replace. He is a confidant of Brian France and a man well-versed in the inner-working of NASCAR, a sport full of tangled webs of agreements and interests. The new NASCAR TV contract will be negotiated this season and begins in 2015.

We will update this post as reaction continues and details emerge about his future plans. In the meantime, we welcome your comments on this story.

Posted by Daly Planet Editor at 7:30 AM 7 comments: