Halloween On SPEED Is A Tradition 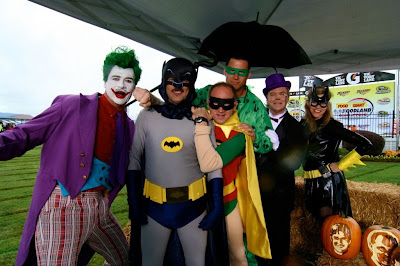 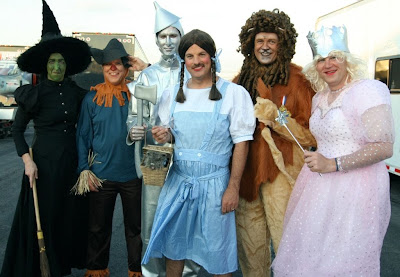 Some folks love it and some folks hate it. The only thing that really matters is that the SPEED on-air announcers are game and the results are often priceless.

It's time for yet another Halloween in costume for the Camping World Truck Series TV team. Thanks to SPEED for the two pictures above. You can click directly on them to see them full-size and right click to save them to your computer.

We have spent a lot of time recently documenting the struggles of ESPN as the network televises the Chase races. There has also been a lot of time and effort dedicated to complaining about what college football has done to the Nationwide Series down the stretch on ESPN2.

Today, we can take a minute to shine the spotlight on the SPEED gang and their consistent presence in the truck series. Ratings are small, but trending upward for the trucks once again this year. The spread of SPEED-HD has no doubt played a role as sports fans discover that the trucks look great on TV.

Krista Voda has recently changed roles and now hosts the Trackside show in addition to The Setup pre-race show for the trucks. From the beginning, it was clear that Voda had the ability to cut through the clutter and hype where NASCAR racing is concerned.

Producer Keith D'Alessandro and director Roger Vincent have taken a very different approach to racing. That begins with the pre-race show. No fancy sets, no heavy graphics and no panel discussions. Voda is alone on the starting grid like a local station news reporter. Here we are, this is what's happening and we are live.

On these Halloween weekends Voda does the entire show front and center in her costume without missing a beat. Over the years, Voda has anchored The Setup in the freezing cold, the scorching heat and the pouring rain. At tracks big and small, this simple and effective approach has won over TV viewers.

It's hard to erase the image of pit reporter Adam Alexander as Glinda, the Good Witch of the South. His interviews in costume with Ron Hornaday Jr. and Todd Bodine were priceless. Alexander's broadcast partner Ray Dunlap did himself proud as Dorothy. The video of him skipping down pit lane with Toto in a basket is destined to live on for a long time.

Alexander and Dunlap are effective because the truck series has fewer trucks competing for the win and two pit reporters can usually get the job done. As you may have guessed, it's the budget that does not allow a third person on pit road. Perhaps, next season SPEED may consider that option.

Unlike the various ESPN on-air talent who rotate through the Nationwide Series telecasts, SPEED uses the same three announcers for the entire season. While Michael Waltrip has missed a race or two, the trio of Waltrip with Rick Allen and Phil Parsons are pretty much inseparable.

These three have become fast friends in real life over the years and that away from the track relationship has helped on many broadcasts. While Allen provides the exciting call of the race, it's Parsons and Waltrip who continue to be a vital part of updating fans on the changing faces of the series.

The role of Parsons and Waltrip is to paint a picture of the field at the races and then follow-up on the wide variety of stories. Certainly, some dominant teams always run up front but the field is peppered with independents and young drivers who are sometimes racing on this level for the first time.

This weekend is a great example. ARCA's Craig Goess races for the first time in trucks. Also, names like Jeffrey Earnhardt, Max Papis and Larry Foyt return. Veterans Kenny Schrader and Mike Skinner are going to be competing alongside of Kyle Busch in his own team truck. It's a diverse field with good stories to tell.

SPEED has practice at 10AM and then qualifying at 4:30PM on Friday. Costumes are out for The Setup at 3PM on Saturday and the race begins shortly after 4PM. Since the Halloween costumes are always a theme for the entire TV team, would you like to offer a guess on this year's choice?

If you are a CWTS regular viewer, please feel free to leave us a comment on how you think TV coverage of the series is being done so far this season. To add your opinion, just click on the comments button below. This is a family-friendly website, please keep that in mind when posting. Thanks for taking the time to stop by The Daly Planet. 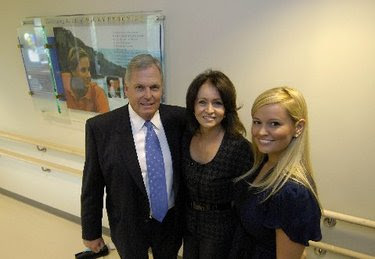 Some interesting TV items away from the track to start this week's media notes:

NBC is in the development stage for a scripted drama centered around a NASCAR family. Here is a blurb from the deadline.com media website:

NBC is developing The Crew, a testosterone-heavy underdog family drama set in the world of NASCAR from Heroes writer-producer Joe Pokaski and NBC Universal-based producer Scott Stuber. The ensemble revolves around the family of distinctly different "brothers" on a NASCAR racing team who, as individuals have their own lives and dreams, opportunities and problems but as a team share a singular goal - to be the best.

What sets The Crew apart is that it is expected to be done in cooperation with NASCAR. NBC is in negotiations with the racing league for the rights to use its name, logos, tracks, race footage, etc. Stuber already has a similar arrangement with NASCAR on the feature side at Universal Pictures where he is producing a NASCAR drama with Gary Ross attached to direct.

No information has been released about potential scheduling or actors involved in the series quite yet. Will pass it along as things develop.

Over in reality TV land, Krishtian Turner has announced that she will be filming Say Yes To The Dress for TLC as a part of her build-up to marrying driver James Buescher. Krishtian's father is the money behind Turner Motorsports, a new team stepping into both the Nationwide and Camping World Truck Series next year with a sizeable commitment. The program will air in the spring of 2011.

Over at InsidePulse.com, Josh Clinton offers that filming for ABC's The Bachelor has already begun in Costa Rica. Starting in January with episode one, there will be a very different NASCAR connection to this program.

Pictured above with Rick and Linda Hendrick is Emily Maynard. She met and was subsequently engaged to Ricky Hendrick at the time of the tragic plane crash. Maynard later revealed that she was pregnant at the time and now has a five year-old daughter named Josephine.

Maynard's name surfaced later in dating rumors with none other than Dale Earnhardt Jr. While that ended quickly, Maynard moved into the media world doing a podcast for SPEED and then working as a host on the syndicated 3 Wide Life motorsports series.

Now, Maynard is one of the ladies competing for the attention and affection of Brad Womack, who is making his second appearance on The Bachelor after choosing not to "take a bride" on his last go around. There is little doubt that Maynard will attract a lot of media attention as this program airs.

You may have heard by now that TV ratings for Sunday in Martinsville were down slightly. Basically, about five million viewers tuned in. "Undercover Boss" later that night had twice the audience.

Wednesday brings the media attending the announcement of a new primary sponsor for Jeff Gordon over at Hendrick Motorsports. It also reportedly brings the RPM crisis to a head. Unless some key creditors are paid, it looks like Talladega might be without four Sprint Cup Series teams.

"NASCAR Now" with Mike Massaro at 5PM on ESPN2 and "Race Hub" with Steve Byrnes at 7PM on SPEED will have updates on all the news of the day. In the meantime, please feel free to leave us a comment on any of the topics discussed above. Thanks for stopping by.

Posted by Daly Planet Editor at 1:00 AM 9 comments: