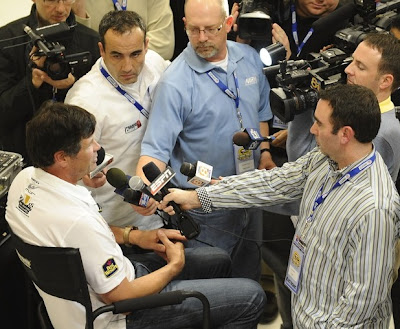 The NASCAR on FOX team held their annual pre-season conference call Tuesday afternoon. This season, there is going to be an on-air addition who will light up the Internet with almost everything he does. Michael Waltrip has joined FOX.

The traditional way of thinking about who should appear as an analyst on a network TV sports telecast used to be easy to understand. It was always someone who had no vested interest in those competing. Those times have come and gone.

Since 2007, ESPN has put Brad Daugherty and Rusty Wallace on the air while they actively owned teams. SPEED's Phil Parsons just left the Nationwide Series and is going Sprint Cup Series racing as an owner full time this year. Now, FOX joins those ranks by putting the younger Waltrip in a key role.

Waltrip's approach is easy to understand. He just puts his comments out on the air and lets the NASCAR TV fans judge them. In my world, few are judged more than Michael Waltrip. He is a confusing presence in a NASCAR world of tangled webs of ownership, loyalty and money.

This Sunday, the Waltrip brothers will be the on-camera face of NASCAR during the pre-race show for the Daytona 500. FOX is counting on the banter between the two erasing the memory of the tired act that used to be the Hollywood Hotel.

Chris Myers was confused, but kidded because he cared. Jeff Hammond rolled his eyes at Myers and tried to make Darrell Waltrip pay attention to his crew chief perspective on situations and issues. There was no window in the new Hollywood Hotel and that just reinforced the fact that FOX was in its own little world.

Last year, the early portion of the pre-race show moved outside. Darrell's dynamic personality worked well in this setting and seeing the pre-race preparations behind the announcers was a hit. The same scenario will be used this season.

While John Roberts will be hosting this Sunday until Myers returns, the change for FOX is that two loud, over the top and opinionated drivers will be asked to share the pre-race stage. The TV network is hoping this duo can put some fire back into the pre-race show and become classic set-up men.

Fans have already been emailing with complaints. How can an active multi-car Sprint Cup Series owner offer opinions on the very teams against which he competes? Aren't these two really Toyota employees? Should we expect Michael to criticize his own drivers on the air when there is a problem? Expect these concerns to continue.

Last year, FOX paired the Waltrip brothers on several race telecasts on SPEED. Actually, the two were quite entertaining in the TV booth and the informality of the SPEED TV environment made them fun to watch. On Sunday, however, things will be very different. This is broadcast network TV with plenty of fans watching every word.

Hardcore fans of the sport already know Michael quite well. After appearing on SPEED's Monday night NASCAR show, Waltrip moved on to the Inside NASCAR series on Showtime. He has been a regular on SPEED's RaceDay, an analyst on SPEED's truck series races and has basically used TV as a tool for the continual exposure of his sponsors.

Where Michael will not be is in the TV booth this season for FOX. Well, at least not yet. However, it's a good bet to believe we will hear much more from him in his Hollywood Hotel location during the race than any infield analyst in the past.

Directing traffic in the TV booth during the race will be Mike Joy. Should Michael not make the 500 for some reason, Joy will face the task of dealing with Michael in the Hollywood Hotel with an open microphone for three hours. Keep an eye on that dynamic if it unfolds.

The man in the middle is Larry McReynolds. It's not a difficult thought that eventually McReynolds and Michael may trade places. That would give FOX two excitable Waltrip brothers in the TV booth and put the dependable McReynolds in the same role he has on the TNT telecasts. That is as the strategist offering updates and information from the infield during the event.

What we know is that Michael's goal is to get behind the sport and promote it at this critical time. Embracing Danica Patrick, celebrating Tony Stewart and reminding TV viewers that the tandem-racing has mostly been erased will be high on his Daytona 500 agenda.

In the past, fans have offered mixed reactions to having active NASCAR team owners on TV as analysts for the sport. This time, we would like you to share your thoughts on having Michael on-camera for the pre-race and then participating as an infield analyst for the actual races.

What do you think, fair or foul? Is his presence advancing the sport because of his recognition factor or is Darrell's younger brother a confirmation that NASCAR is really entertainment? Let us know what you think by clicking on the comment button below and adding your opinion to this conversation.

Thank you for taking the time to stop by The Daly Planet.