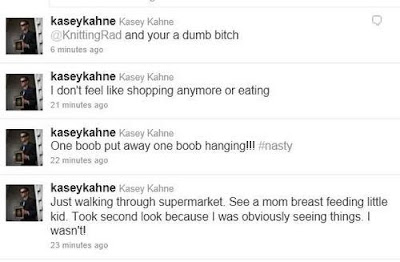 Tuesday afternoon Kasey Kahne used his cell phone to talk about his trip to the supermarket. He tweeted to his 99 thousand followers his surprise at seeing a woman breastfeeding in the store. Then, things went very wrong.

Social media applications like Twitter work best for celebrities when they are promoting something specific, interacting favorably with fans or sharing something fans can't get elsewhere like news or pictures.

Twitter takes on a very different role when celebrities put emotion ahead of thought and share opinions on topics outside of their normal world. Kahne's tweets came out of the blue, but appeared to be a frank and honest expression of his emotions at the time.

Unfortunately, while his words were honest they perhaps were being sent to precisely the wrong audience. Kahne's female followers were at first confused, asking if he was being serious. Some suggested that a person had taken his phone and was sending these messages to get him in trouble.

In fact, the words were from Kahne and things went off the tracks pretty quickly. Sometimes, these social media issues can be contained and fade away. But when you put a personality like Kahne together with a hot button issue like public breastfeeding, there is little doubt it's going to snowball.

As we have seen before, when certain parts of the media latch onto a story it takes flight. Here are some examples:

NASCAR driver Kasey Kahne slams breastfeeding mother in grocery store on Twitter is from The Daily Telegraph in Syndney, Australia.

Every good story needs a "hook." That is the part of the story that grabs the attention of the reader. In this case, the angry tweets on Tuesday afternoon, complete with profanity, came at Kahne so fast he lost control and responded to one insult by calling the Twitter user a "dumb bitch."

Deana (KnittingRad) from North Minneapolis had her 15 minutes of fame as the object of Kahne's tweet. In fact, she uses the Twitter snippet above as the avatar (picture) on her Twitter account now. She calls it her badge of honor.

Kanhe followed up on Wednesday with an apology. "I wanted to apologize for saying what I said to you yesterday. It was out of line," he posted on Twitter. Deana said she was over it and we should all move on. That's not really how it works these days.

There is little doubt that some public relations professionals were dispatched to this situation rather quickly. The interesting solution to the uproar was the use of another social media platform, Facebook, to try for a solution.

This was posted on Kahne's Facebook page late Wednesday afternoon:

"I understand that my comments regarding breastfeeding posted on Twitter were offensive to some people. For that, I apologize. It was in no way my intention to offend any mother who chooses to breastfeed her child, or, for that matter, anyone who supports breast feeding children. I want to make that clear."

"In all honestly, I was surprised by what I saw in a grocery store. I shared that reaction with my fans on Twitter. It obviously wasn’t the correct approach, and, after reading your feedback, I now have a better understanding of why my posts upset some of you."

"My comments were not directed at the mother’s right to breastfeed. They were just a reaction to the location of that choice, and the fashion in which it was executed on that occasion."

"I respect the mother’s right to feed her child whenever and wherever she pleases."

It's interesting to watch the news cycle of today. A tweet from a cell phone leads to outraged responses and ramps-up to profanity involving a very public figure. Select news outlets latch onto the story and try to add-in a catchy headline to attract readers. Ultimately, some PR folks use Facebook as a platform for a public apology and the last opportunity for direct feedback via comments.

All of this happened over basically a 24 hour span. Kanhe is heading to the friendly confines of Tulsa and the Oklahoma State Fairgrounds for the indoor Chili Bowl midget races from January 10 to 14. Then, his normal NASCAR activities start to heat up as the Daytona 500 looms on the horizon.

A good apology goes a long way with the public and stories like this one don't usually have long "legs" as they say in the media. As the NASCAR season approaches, the best advice is the simplest in the world of social media.

We welcome your comments on this topic. To add your media-related opinion, just click on the comments button below. Thank you for taking the time to stop by The Daly Planet.