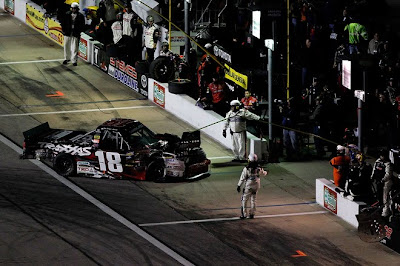 Updated: NASCAR President Mike Helton announced that after the incident under caution in the truck series race, driver Kyle Busch has been parked for the weekend at TMS. Michael McDowell will replace Busch for the Cup race and Denny Hamlin will be in today's Nationwide Series race.

Friday night Busch was involved with veteran driver Ron Hornaday in a truck series tussle that began with casual contact and ended with Busch turning Hornaday into the outside wall. All of that was telecast live nationwide on SPEED.

A post-race meeting on Friday night lasted only three minutes and it was clear Busch had been told to come back in the morning when all the top NASCAR officials would be at the track. He was not a happy camper.

A big TV highlight of the race was feisty SPEED pit reporter Ray Dunlap's interview with Busch after being parked by NASCAR. "So, did you just lose your mind for a few seconds there?" said Dunlap. A classic line lifted from the Trace Adkins NASCAR promo using old Busch footage of Kyle giving official the single-digit salute.

Wendy Venturini and Bob Dillner will be patrolling the TMS garage when SPEED comes on the air at 9:30AM Saturday morning for Sprint Cup Series practice. Steve Byrnes will be in the TV booth with Larry McReynolds and the one and only Kyle Petty.

Since the meeting will take place right before SPEED goes on the air, it should be interesting to watch Venturini and Dillner report the Busch meeting news and then have McReynolds and Petty comment on it.

Petty is not shy about sharing an opinion and McReynolds draws on his experience with drivers injured or worse in racing accidents when he says don't use your race car as a weapon. That is exactly what Busch did on Friday night live on TV.

We will use this post to keep you updated on the happenings from the track Saturday morning. As always, there is a full weekend schedule of NASCAR TV shows on the left side of the main page. Please feel free to add your comments on this topic as the Saturday NASCAR TV rolls by. 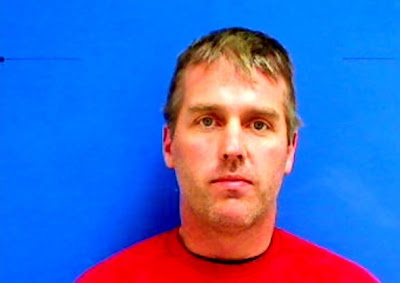 Former NASCAR driver Jeremy Mayfield was arrested after a search for stolen property at his home by law enforcement personnel turned up a lot more. That is his mugshot above.

Click here to view WSOC-TV reporter Alan Cavanna's story airing on Wednesday night for the details. Thanks to WSOC for making it available.

All day long on Wednesday, the story kept expanding. By the end of the day Mayfield's attorney had spoken to AP motorsports reporter Jenna Fryer. He said Mayfield was fully cooperating with authorities, but that Mayfield had no knowledge of the stolen property or the alleged methamphetamine recovered from his property.

The attorney asked that the public reserve judgement on the issues involved. Unfortunately, that is likely not what is going to happen on Thursday. What is coming is a media storm that will once again try to link NASCAR and drugs.

As with any other hardcore NASCAR story, the Mayfield news will take at least a full day to get to most of the mainstream media. This is the type of story that tabloid websites and the cable news networks love. It has all the elements to become another stereotypical story about a redneck NASCAR driver who steals for a living when not smoking meth or selling weed.

Thursday's media watch is a post for you to a comment about where you saw the Mayfield arrest story pop-up and how it was tied to NASCAR. The current media appetite for this type of scandal was proven back when Mayfield was first suspended and then began to hurl allegations against many NASCAR executives.

Over at Cafe Mom, a social site, there is already someone stirring the controversy. "Let's face facts: Meth is to NASCAR what steroids are to every other sport," wrote Jacqueline Burt. "Looky here, a hillbilly race car driver can't live on moonshine alone, now can he?"

"Former NASCAR driver Jeremy Mayfield had enough firepower inside of his home to equip a small army," screams TMZ Sports. The bottom-feeding gossip website has huge media power and NASCAR is again about to be linked to drugs and bad behavior.

On the dark side, it looks bad for anyone to have stolen property and illegal drugs on their property. Information forwarded by the Mayfield camp says Mayfield himself voluntarily opened his gun locker for authorities and the weapons are legal. Fyer tweeted late Wednesday night in reference to the stolen goods that Mayfield has been running a scrapyard on his property as an income generating business.

NASCAR has finally got things in the Chase for the Championship back on track. Tony Stewart and Carl Edwards are all over the media trying to inject hype and excitement into what has been a rather bland playoff until this past weekend. Now, an old thorn crops up in NASCAR's side at a terrible time.

There will be many media outlets trying to work this story on Thursday, including those wanting an interview with Mayfield, his attorney or the ranking law enforcement professional involved in the raid.

Please use the comments section of this post to report where you say the Mayfield story, if anything new was reported and how you feel about this issue as a NASCAR fan. We will update any new official information on this post.

Thanks for taking the time to stop by The Daly Planet, Thursday should be very interesting on the NASCAR media beat. 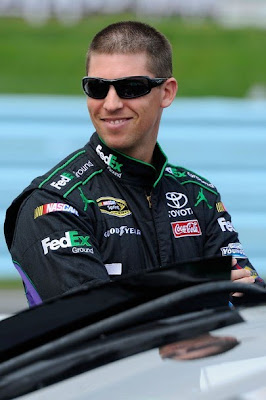 The big story of the day is Kyle Busch being parked for the TMS weekend after his truck race incident last night. ESPN2 gets the first race without Kyle, as Denny Hamlin will race the JGR car in the Nationwide Series race today.

Nicole Briscoe will have Rusty Wallace and Brad Daugherty alongside of her in the ESPN Pit Studio. Two current owners commenting on a driver employed by another owner just does not seem right. It should be interesting to see what they say on the pre-race show.

Marty Reid will call the race with Dale Jarrett and Andy Petree. Jamie Little, Dr. Jerry Punch, Dave Burns and Vince Welch will be the pit reporters. Tim Brewer is in the Tech Garage.

ESPN finally gets a good theme for this event, which in the past has featured Cup drivers running away with the race. This event has Danica, lots of new faces and Cup drivers with nothing to lose. As usual late in the season, those running for the championship mix with those looking to keep a ride.

Texas is fast and the TV challenge is to show the packs of cars as contact is the reason for most incidents. Restarts are interesting and the long-shot down the backstretch is the most useful camera, as most of the passing happens in that area.

The weather is good, but the story of the weekend is going to be Kyle Busch. Watch to see how ESPN handles the balance between the two. We want your TV-related comments as the race is in progress. To add your opinion, just click on the comments button below. Thanks for taking the time to stop by.