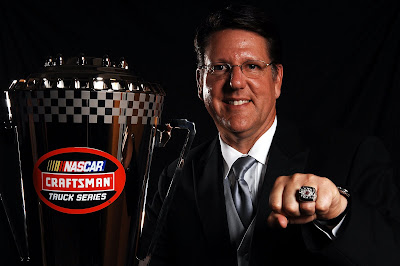 Rick Allen and Krista Voda set a classy tone for the Truck Series banquet on SPEED Monday night. These two are veteran hosts of this event and that was apparent in their easy banter with the crowd despite the formal attire.

After introducing the head table that included champion Johnny Benson's two children, comedian Tom Papa tried a little something new. He augmented his routine with footage and interviews shot at a Truck Series race. It was a nice idea, but a little bit of a tough sell right at the top of the show.

Just like the Nationwide Series event, this edited banquet TV show was fast-paced. It was a bittersweet moment for Johnny Benson as he accepted the Most Popular Driver award. Fans know all too well that Benson will probably not return to NASCAR in 2009 and this was a strong final testament to his appeal to the fans.

Colin Braun was next to pick-up his Rookie Of The Year award and he did so with good humor and a polished presence for a youngster. It was a scripted speech, but it was clear that fans would be seeing a lot more of this driver in the future.

The TV program shifted gears over to the "talk show" setting for the Top Ten driver awards as it has in the past. Voda and Allen both asked questions of each driver and it was clear they were well-prepared. Allen Bestwick and Shannon Spake were also successful with this format during the Nationwide Series banquet.

Once again, the folks at the NASCAR Media Group put together great highlights for each driver as they were introduced. The fact that this show was edited and post-produced allowed things to be tightened-up and the program to keep a quick pace.

While this TV format is shorter, it certainly is better than the scripted monotony of the Sprint Cup Series function. During that evening, even the Master of Ceremonies reads the Teleprompter all night long. Letting the owners and sponsors be mentioned during the highlights is a great idea.

The debate is always going to rage whether to include the comedy and musical acts in the TV show or allow the drivers more time to talk. During John McLaughlin's musical performance the non-points awards were highlighted in brief snippets. It seems the editors and producer tried to strike the best balance possible within the timeslot.

The video tribute to Craftsman was well-produced. The parade of drivers speaking about what Craftsman has meant to them was impressive. NASCAR President Mike Helton appeared at the end to present Craftsman's top executive with an award of thanks. It was a classy move.

As the driver interviews moved to the Top Five, host Rick Allen was strangely eating dessert at his desk while Krista Voda spoke with driver Matt Crafton. Update: Rick was eating it courtesy of Crafton, who was following-up on a joke from the 2007 banquet. Thanks to the SPEED gang for the update. Some drivers answered questions that had nothing to do with racing and focused on life away from the track. It was an interesting mix.

As the introductions started of the championship team, it was back to the Teleprompter for crew chief Trip Bruce. While he said all the right things, it would have been nice to have some conversation to go with the scripted remarks.

Needless to say, when Bill Davis stood to accept his award as the winning owner it was a memorable moment. He also read his remarks, but they were well-written and heartfelt. It certainly is a shame that his racing future is in jeopardy.

Mike Helton did the honors of speaking on behalf of NASCAR. He handled the rings given to both Benson and his wife with dignified words under the circumstances. Benson moved to the podium and delivered exactly what fans expected.

Benson's words were outstanding and reflected the personality that race fans have come to enjoy. Humble and thankful, Benson made his way through his list of thank you's and walked away as the series champion.

SPEED is not going to please all the fans with this abbreviated banquet coverage, but NASCAR seems to have hit on a TV format for the Truck and Nationwide Series. This was a fast-paced ninety minutes that was well-edited and accomplished the goal of allowing the series to present itself in a professional manner and close the season with an emotional speech from Benson.

Fans who would like to see Johhny Benson's championship image above full-size to save as a wallpaper can just click directly on the picture and let it load full-screen. Then, right click to save in the location of your choice. Thanks to the NASCAR PR group for this official image.

The Daly Planet welcomes comments from readers. Just click on the COMMENTS button below and follow the easy instructions. The rules for posting are located on the right side of the main page. Thank you for taking the time to stop by.
Posted by Daly Planet Editor at 8:07 PM 14 comments:

Here Is "The Insider" Link To The Bachelor Story 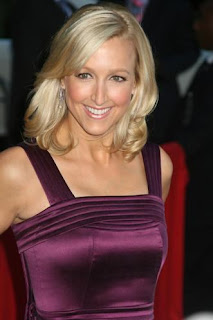 Here is the attempt by host Lara Spencer of The Insider to catch-up with four NASCAR bachelors. Click here to see the entire video.

Thanks to NASCAR fans, the video has Kasey Kahne's last name edited out because the announcer originally pronounced it wrong. Thank goodness for email.

Please feel free to leave your comments, new column about the Truck Series banquet tonight after the show. Thanks.
Posted by Daly Planet Editor at 6:29 PM 4 comments: