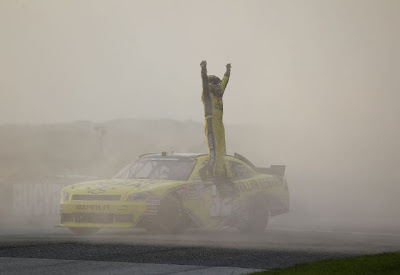 Just when the Nationwide Series was about to fall off the map, changes have brought it back to life in the media. Reed Sorenson, pictured above, was fired over the phone earlier this week. Sorenson says it was over money, his owner Steve Turner says it was over performance.

Vince Welch from ESPN will speak with Mr. Turner in the pre-race show, college football time allowing. This dismissal of the third-ranked driver in the series and the subsequent insertion of Brian Vickers into that seat is a hot topic.

As the sponsorship woes continue on the Sprint Cup Series level, some Nationwide Series sponsors have migrated up one notch due to the ability to get more for the same money. Clint Bowyer joined MWR for 2012 and took Rusty Wallace's 5 Hour Energy sponsor.

Wallace is on the pre-race show with Brad Daugherty and host Nicole Briscoe. Daugherty has been useless this season and it should be his last. Wallace continues to be riddled with conflicts of interest every time he speaks. It will be very interesting to see how he approaches the topics in the new today.

Marty Reid will call the race with Dale Jarrett and Andy Petree. We asked ESPN to bring in a second set of analysts for this time of the year, but instead Jarrett and Petree have been doing double-duty. This does not allow them time to prep for the Nationwide telecasts and it shows.

Dr. Jerry Punch, Welch, Jamie Little and Dave Burns will be on pit road. Depending on who is covering what teams, it could be an interesting day to watch the activity of these reporters. Instead of another Cup dominated event, now there are stories to pursue.

Kansas makes for good racing with the normal struggles to pass. Restarts are outstanding and the layout of the track allows TV to make great pictures. ESPN has all the tools for a good one, let's see how it goes.

This post will host your comments on the ESPN2 telecast. To add your TV-related opinion, just click on the comments button below. Thanks for stopping by.