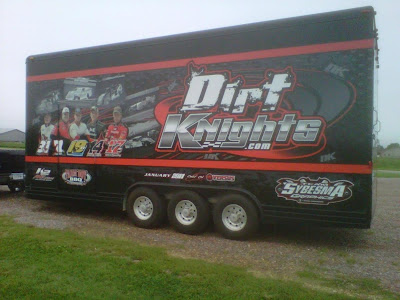 You can look all you want on the VERSUS.com homepage for motorsports and all you will find is old IndyCar highlights. Only by typing "Dirt Knights" into the search box will the website reveal the new motorsports series that will open 2011 for racing fans starved for anything of substance.

This time of year, ESPN is long gone to college sports while SPEED is deep inside the endless replays of Barrett-Jackson auctions and assorted lifestyle shows. You have to wonder just how many times each episode of PINKS has been aired?

It seems ironic that a new homegrown TV series centered around some dirt track racers on VERSUS would be first out of the blocks. Click here to view the promo for Dirt Knights on YouTube. This show seems to have the same feel of THC's Madhouse without all the phony acting between the racing sequences.

Corey Dripps, Scott Green, Al Hejna, Mike Spaulding and Jon Tesch are the Dirt Knights. They race in the Unites States Modified Touring Series (USMTS) and are looking to transfer their love of racing through the TV show.

"This is a project that has been in the works for more than two years now," said Dripps in a media release. "For some, racing is a hobby and for others it’s how we make our living, but either way, we all love and respect this sport. We hope that people will tune in and be entertained, but at the same time we want to
convey what the racing life is really all about."

That just might be music to the ears of race fans who have been left scratching their heads over the lack of this type of programming on SPEED. In the meantime, VERSUS picked-up a Whelen Modified package last season and also carried the Quest for the Cup show during the Chase for the Championship. Now, that network expands again with an exclusive new series that already has fans buzzing.

There is a lot of heart and soul in this TV effort. It's not a high-priced production company trying to manufacture drama or get ratings. It's a group of real racers putting themselves out there for all to see for better or worse. This is their money, their effort and the result of their hard work. What better story is there to tell?

Sunday at 6PM ET is the first airing and don't miss it because there is no West Coast re-air that night. VERSUS is kind of strange like that as the network's Comcast owners continue to try and figure out how to program a cable network. Each of the 13 Dirt Knights shows will be one hour long and it should be a kick to see this grassroots series finally on TV.

Clicking around the Internet can bring a lot more information about the drivers and series. Each driver has a website and the show is being discussed on motorsports forums all around the web.

Without a drop of NASCAR to be found on TV, Dirt Knights has chosen a nice time to debut the series. It might not be for everyone, but getting some original programming at this time of the year is a nice touch. Perhaps this can inspire other drivers and owners to get together and bring more stories of real racers to national TV.

We invite you to comment on this topic. To add your opinion, just click on the comments button below. This is a family-friendly website, please keep that in mind when posting. Thanks for taking the time to stop by The Daly Planet.

Posted by Daly Planet Editor at 4:45 AM 3 comments: