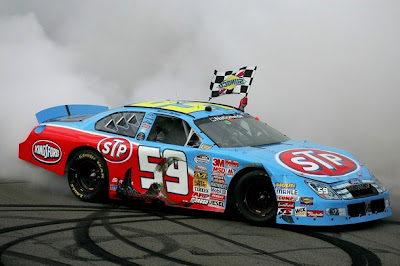 Here we go with what might be one of the best races of the season. ESPN2 will be covering the Nationwide Series event beginning at 2:30PM ET.

Allen Bestwick will have thirty minutes to set the table for the race from the Infield Pit Studio. Bestwick will have his regular panelists Rusty Wallace and Brad Daugherty alongside. This show should revolve around the wide variety of personalities in the field.

Sprint Cup drivers, Nationwide regulars, road course ringers and one-time Watkins Glen specials will make up the field. The result is going to be a very different on-track dynamic than fans have seen so far this season in the Nationwide Series.

Once things get underway, it will be Marty Reid calling the action with Dale Jarrett and Andy Petree alongside. On pit road will be Jamie Little, Shannon Spake, Dave Burns and Vince Welch.

The weather looks good, the TV crew is experienced and the track is poised to feature the new NASCAR restart rules into a very exciting Turn 1. The ingredients are in place, we shall see how it all plays out.

This post will serve to host your comments about the ESPN2 coverage of the Nationwide Series from Watkins Glen. To add your TV-related opinion, just click on the comments button below. This is a family-friendly website, please keep that in mind when posting. Thanks for taking the time to stop by.
Posted by Daly Planet Editor at 1:45 PM 223 comments: 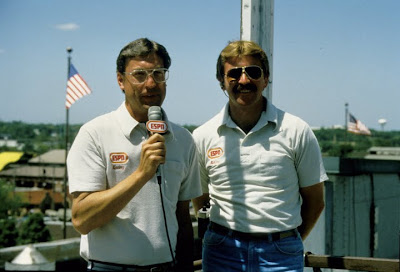 It might not be exactly like seeing the classic pairing of Bob Jenkins and the late Larry Nuber from the 1980's, but Saturday afternoon ESPN may be offering fans a glimpse into the network's NASCAR future. This might just get your attention.

The cast of characters for NASCAR's live race coverage on ESPN has been shifting slowly for the past two seasons. These positive changes in the ESPN on-air talent have been welcomed. Suzie Kolber moved aside and in stepped Allen Bestwick. The Infield Pit Studio has been buttoned up ever since that first day.

Joining Bestwick has been Rusty Wallace, who stepped away from the pressure of the Lead Analyst role on the Cup Series. Wallace has been enjoying his new perspective from the infield with Bestwick and Brad Daugherty. Wallace can still step up when needed, but talking as an expert from the infield really suits his style.

Bestwick, Wallace and Daugherty will start the Saturday Nationwide telecast with a thirty minute pre-race show. Tim Brewer will man the Tech Garage where he continues to try and connect the issues in progress on the track with the parts and pieces in his mobile studio. These four faces are in the right places as ESPN heads down the stretch.

Partnering with the infield gang are the four regular ESPN pit reporters. Coming off a horrible week in Pocono, there will most certainly be more thought given before asking questions or making statements in the Watkins Glen pit area. Jamie Little, Shannon Spake, Dave Burns and Vince Welch are sometimes told what to ask, but veteran reporters just kind of know when a train wreck is coming. Welch learned that the hard way.

Key to the broadcast and perhaps to the remaining future seasons of NASCAR coverage by ESPN are the three men in the broadcast booth. Dale Jarrett has worked very hard to become a smooth and polished analyst. He has also learned the hard way how to offer play-by-play coverage when needed.

Saturday, when Jarrett looks to his left he will see the TV veteran Marty Reid calling the play-by-play. The weight of the world will be lifted off Jarrett's shoulders. He will be free to continue to develop his reputation as a TV analyst because Reid will direct the TV traffic, make the race exciting and put Jarrett in the spotlight. Reid is a classic play-by-play motorsports announcer.

The difference in Andy Petree's on-air performance between working with Wallace and Jarrett is night and day. Once Wallace made the move to the infield, Petree came alive and has teamed with Jarrett to provide interesting and thoughtful analysis. What may finally push Petree up another rung on the TV ladder is having Reid alongside.

This single telecast may well serve as an example of what ESPN can actually bring to the table where NASCAR is concerned. The network bobbled in many areas in year one, but made the first round of changes. In year two, significant change in several areas solved almost all the remaining issues. Now, in year three we may be seeing on Saturday the line-up that ESPN expects to put front and center for 2010.

How this race unfolds on the track will be one issue. How the live telecast unfolds on ESPN2 will be quite another. All the big dogs are in place and the pressure is on to get all the on-air elements clicking. The same on-air issues discussed by TDP readers are also discussed by the ESPN management and NASCAR.

If by the final laps of this race it becomes clear that a new and exciting on-air dynamic has been created, we may well have finally witnessed the beginning of the type of NASCAR franchise that ESPN enjoyed in the 1980's and 90's.

TDP will be live blogging the telecast and welcomes your comments on the ESPN team. The live blog will start at 2PM and continue through post-race comments. We will also be working on Twitter to get reaction from NASCAR fans to the telecast. You can click on the picture of Jenkins and Nuber to see it full size.

In the meantime, please feel free to add your comments on this topic. To add your TV-related opinion, just click on the comments button below. This is a family-friendly website, please keep that in mind when posting. Thank you for taking the time to stop by The Daly Planet.
Posted by Daly Planet Editor at 12:10 PM 22 comments: