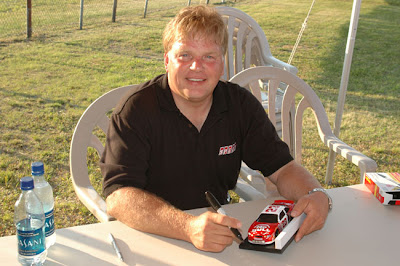 Since it began, the one hour Victory Lane program on SPEED has been a hit with fans. SPEED has made a living with its NASCAR shows by filling the support programming role. Basically, that means "everything but the races."

Over the course of a weekend like Bristol, its not uncommon for SPEED to televise all the practice sessions and qualifying for the Busch and Cup Series. Aside from the on-track activity, they provide Trackside, NASCAR Live, RaceDay, Tradin' Paint, Go or Go Home, and NASCAR Performance. All of these are either shown live or taped for broadcast later the same day.

The final program originating from the track each week is Victory Lane. After a long day, the veteran crew of John Roberts, Jimmy Spencer, Kenny Wallace and Bob Dillner take to the air for an hour of interviews with the race winner and many others involved in the stories of the day.

While the show has been tremendously popular with viewers because of the exclusive interviews, it has also been a coming-of-age for Jimmy Spencer in several ways.

Like so many others in racing, Spencer's exit from his driving career was not graceful. NASCAR might guarantee a certain level of income, but it absolutely does not guarantee any kind of personal fulfillment. Even DW limping around with his chrome car was not exactly the retirement season one might plan.

When Spencer began his TV career, he was just as rough on-the-air as he was behind the wheel. Still, there was something there that made viewers think perhaps he had more to offer than high volume and a questionable hairstyle. He knew racing, he cared about racing, and he was never afraid to speak-up.

It is this heart-on-his-sleeve blue collar working man appeal that has kept Spencer's fans loyal to him long after his driving days were over. With many of his contemporaries retired, and several deceased, Spencer reminds us of the days before the millionaire drivers took their personal helicopter to their yacht in the harbor.

Chances are, Spencer would be under the grandstand "talking" personally with someone about an on-track issue. That is the appeal for Victory Lane fans. He has been there and done that. He might not have won a championship, but his long personal history in racing, and his colorful NASCAR career make him a memorable character.

SPEED has to be commended for allowing Spencer to become a better broadcaster by partnering him with John Roberts and Kenny Wallace. Teaming Spencer with one professional TV host and one completely wacky but beloved driver has been terrific. When Spencer gets too loud, Kenny tells him. When Spencer gets off-track, Roberts reels him in. But, make no mistake about it. In Victory Lane, Jimmy Spencer is clearly the star.

Spencer starts the show usually alone with Roberts, as often times Kenny Wallace drives in the race. In these moments, Spencer talks very clearly about what happened on the track, how the winner got it done, and then his general thoughts about the entire race. It finally gives Spencer a solo pulpit from which to preach, and preach he does. The amazing thing is, its very interesting almost every time.

This Saturday night at Bristol was a great example. Spencer had Carl Edwards, the COT, Goodyear, a new track surface, Dale Junior, and a ton of other things to deal with immediately after the race. There is no script for this show, you either know it or you don't. And when you don't, the national TV audience knows it too.

When Edwards arrived, Spencer waded right in with Carl on the tires, and Edwards immediately agreed on his points. The younger set of drivers have a clear respect for Spencer, who most of them know best for his broadcast career. They just like to talk to him. When Jack Roush stopped-by, Jimmy framed the five COT races in The Chase as the key point for Roush/Fenway Racing, and Jack re-enforced these observations.

As Bob Dillner interviewed the other contenders, Spencer gave both facts and opinions on a wide variety of subjects. This is the time in the show when you have to know your stuff. Anything can be a subject for debate, and often times there may be strong feelings involved after a race. Who can relate better than Spencer?

It took me a while to warm-up to this program, and this man. Anyone who speaks out is always going to occasionally trip-up, but earlier this season Spencer did a good job interviewing Kurt Busch and giving him the proper respect. His interview with Montoya at Sonoma was a classic, I think he got Juan more excited about the win that the race seemed to do. When he has Tony Stewart to talk to, things always get out-of-hand. Its clear drivers like this show, and the man in the middle.

Things are different this season as ESPN now produces all the NEXTEL Cup races through the end of the year. Victory Lane is going to be critical to fans getting more information than the ABC broadcast network will air in its short post-race show. SPEED is once again positioned to be the source for "everything but the races" as the NASCAR season hits the home stretch.

Let's hope Jimmy Spencer continues to improve and keep his commentary on the sport at a high level. Like any good driver, just focusing on the task at hand has helped Spencer become a respected source of information and conversation on Victory Lane.

The Daly Planet welcomes comments from readers. Simply click on the COMMENTS button below, or email editor@thedalyplanet.tv if you wish not to be published.

"NASCAR Now" In The Midnight Mode 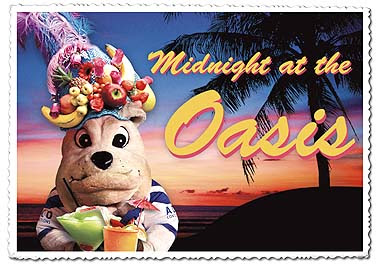 Another unique situation occurred for ESPN with NASCAR Now airing a midnight version of its thirty minute show after the night race at Bristol. Hyped as a potential crash-fest, the network instead found itself dealing with a clean and almost boring race with a runaway winner.

Right away, host Erik Kuselias talked his way though the video highlights with Stacy Compton and Boris Said alongside. Kuselias is always put in a tough spot when he has little lead time for highlights. There is no script that he can rehearse, so his lack of racing knowledge is put on display.

This was the case at midnight, where Stacy and Boris often stepped-in to help him with concepts like passing, running the high line, and the fact that drivers don't "plan" where to finish at Bristol...things just happen.

Instead of showing the actual racing action, NASCAR Now is caught-up in showing accidents and incidents as the stories of the race. Its kind of like SportsCenter only showing homeruns in baseball highlights.

Usually, this is only a small part of the whole story of what happened. Viewers need a recap of how the race shook-out, not who spun or blew-up. Key pitstops, great saves, and moments of patience can be just as critical as "he hits the wall."

Leave it to Tony Stewart to swing the hammer at the press and then for ESPN to replay it. "It was awesome" Tony said of the new pavement. "It was the most fun I have ever had racing at Bristol since I have been here" he continued. The reporters crowded around pushing him for controversy. They were egging him on with "how was it different?" questions. The gang wanted anger, they wanted outrage, they wanted "bad boy" Tony to explode. What a fun way to live your life as a driver, huh?

"Did you watch the race?" said Tony. "What did you think was different?" When the reporters said "um...not a lot of crashes?" you understood a lot better what these drivers have to deal with day-in and day-out from the media. Tony said "you might want to watch some more races." NASCAR translation: how is it possible that you are here in Bristol with a mic in your hand, press pass on your shirt, and you have absolutely no clue to this sport?

Once back on the ESPN set, Erik Kuselias immediately defended his colleagues. "We have Manny being Manny (Red Sox baseball reference) and I guess this is Tony being Tony." What Kuselias is saying is that Tony was out-of-line and giving the press a hard time again. Can you believe that is all he got out of Tony's comments?

Then, to swing his own hammer at Stewart, Kuselias said "let's talk about the guy who actually won the race, Carl Edwards." Wow. So, Stewart is just some backmarker who dared to spout-off at the high and mighty Media? That's going to play well on his radio show. Can you believe after all the problems with ESPN reporters and Tony this season that ESPN would choose to step back into this arena?

Stacy Compton and Boris Said both pointed to Roush/Fenway for getting their COT act together and the efforts of their engineering staff. This was, they both said, the key to Carl Edwards winning effort. Unfortunately, this type of racing inside information goes right in one Erik Kuselias ear and then out the other.

Recapping the race includes interviewing and featuring Dale Earnhardt Jr. every time. Junior kidded ESPN for their rain delay luck, and then paid a great compliment to the whole DEI team. With ESPN obsessed with The Chase and not the race, Brad Daugherty appeared live from the track to address more "Junior making The Chase" issues. Daugherty just needs a crystal ball on his set, because ESPN continually asks him to address issues involving "guessing and predicting."

Tim Cowlishaw again appeared to review information already discussed and try to create some controversy. He tried to stir the Stewart vs. Roush, Bowyer vs. Hendrick, and the Kenseth vs. Carl Edwards pots, but had absolutely no luck. The silence on the set from both Stacy Compton and Boris Said spoke volumes.

You have to wonder what these two veterans think about designated "mouthpieces" like Cowlishaw and Daugherty repeatedly talking about the obvious. Now seven months into ESPN's NASCAR efforts, the frustration level has got to be high.

Fittingly, NASCAR Now once again dug-out Aerosmith to show-off the fact that ESPN has some of the best sports editors in the business. Each week they work very hard to breathe life into this tired and absolutely ridiculous piece of video which closes the show.

The challenge of sprucing-up the lip-syncing of a fifty-nine year old man from Yonkers and his band mates into something that NASCAR fans can tolerate is no small job. But somehow, armed with a couple of fender-benders and a back flip, they made it work once again.

If NBC/TNT can win a national Emmy Award for Best Live Sports Series with their 2007 NASCAR efforts, than certainly the ESPN editors will sweep the 2008 Best Editing Award for thirty eight weeks of performing life support on "Back in the Saddle Again."

The Daly Planet welcomes comments from readers. Simply click on the COMMENTS button below, or email editor@thedalyplanet.tv if you wish not to be published. Thanks again for taking the time to stop-by.
Posted by Daly Planet Editor at 12:02 PM 26 comments: