With Fox Cutting MLB Pre-Game Show Is Hollywood Hotel Next? 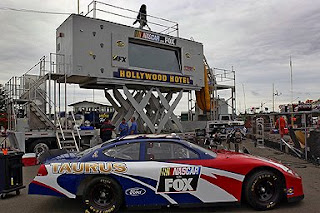 Fox Sports has decided to eliminate the on-location pre-game show for the Sunday Major League Baseball games telecast by the network in 2009. Former NASCAR reporter Jeanne Zelasko and MLB veteran Kevin Kennedy were featured on the broadcasts.

According to LA Daily News Tom Hoffarth (click here), the Fox broadcasts will now come on the air at 1PM and the first pitch will be at 1:07PM. The thirty minute pre-game show is gone, which also means the booth announcers will have to deal with rain delays and other stoppages of play.

Several weeks ago, word came out that both ESPN and Fox were looking hard at cutting TV production costs in several major sports properties. NASCAR was high on the list for both networks. Several meetings have taken place where executives from Fox, ESPN and NASCAR discussed what opportunities were available for cost savings.

Obviously, one target for both Fox and ESPN is the custom-made TV trailers that are brought on the road to host the pre-race shows. At Fox, that is called the Hollywood Hotel. Chris Myers and Jeff Hammond are joined by Darrell Waltrip during the pre-race and then Myers and Hammond remain in the Hollywood Hotel for the duration of the event to add opinion and commentary.

This piece of equipment has become sophisticated over the years and now has all kinds of TV effects and multiple camera angles built right in. Basically, it has become a mobile high-tech TV studio.

Since Fox has now stepped forward and confirmed that they are going to be cutting the TV production on the Major League Baseball games of the week, it would seem that February's start of the NASCAR season would be next in line for the financial microscope.

ESPN also begins their Nationwide coverage at Daytona and has not said a word about the changes that it may have in store for the new season. ESPN brings the Infield Pit Studio to all the major Nationwide Series races and all the Sprint Cup events covered by the network.

That facility not only hosts the pre-race programs, but also functions to host practice and qualifying shows as well as Sprint Cup versions of NASCAR Now. Although it may be expensive, ESPN gets a lot of use from this piece of TV equipment.

ESPN also travels Tim Brewer's Tech Center, which is another expensive custom-made trailer that contains a cutaway car and lots of other racing parts. The Tech Center just might not see as many road miles next season if this trend continues.

It should be the next week or so when word comes out about the changes for NASCAR TV production for 2009. Seeing what Fox did with baseball and the recent demise of DirecTV's Hot Pass are unfortunately going to set the tone for what TV viewers will probably be dealing with shortly.

We will update the news as it happens and try to keep NASCAR fans ahead of the information curve during these very strange days.

The Daly Planet welcomes comments from readers. Just click on the COMMENTS button below and follow the easy instructions. The rules for posting are located on the right side of the main page. Thank you for taking the time to stop by.
Posted by Daly Planet Editor at 8:30 PM 33 comments: 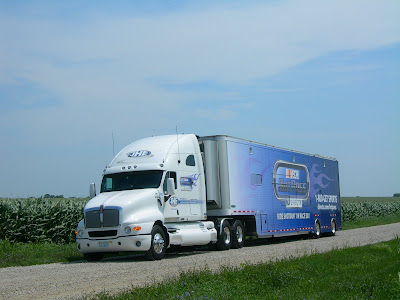 We are going to be leaving this story open for your comments. New updates will be posted at the bottom of this column. Hot Pass being cancelled is now confirmed for next season.

The email is flying around the Internet, but as of Tuesday evening we are being told that DirecTV has cancelled NASCAR Hot Pass for 2009. Official word should come sometime on Wednesday. That is the Hot Pass TV production trailer pictured above. Click on the picture to see it full-size.

This service, which provided four "mini-networks" to subscribers, featured two announcers calling the race from the perspective of each driver. Fans got to hear all the in-car radio traffic, see the various in-car cameras and switch between the four feeds anytime during the race.

DirecTV had also added-in some special features like additional driver audio channels and a super-channel that let viewers switch quickly over to the network TV feed of the race itself. Any way you looked at it, this was a bold TV experiment.

Unfortunately, instead of being available to the 90 million cable TV households across America, Hot Pass was only available to the 15 million homes that subscribe to DirecTV. That was a big problem.

This idea was brought about by Fox Sports Chairman David Hill when he was actively involved in the DirecTV operations. Now, Hill has returned to his Fox Sports duties and the Hot Pass experiment is supposedly over.

In the past, we had been told that between 250 and 300 thousand DirecTV users had to subscribe to Hot Pass to make it break even. With the economy tight and times getting tougher, it seems that DirecTV has seen the writing on the wall and will not attempt to distribute the Hot Pass service in 2009.

Many of the top announcers in NASCAR worked on Hot Pass. Wendy Venturini was given the opportunity to handle play-by-play duties and veterans like Phil Parsons and Randy Pemberton could be heard on almost every telecast. The line-up of on-air talent was one of the most impressive parts of the service.

Former SPEED VP Chris Long was handling the Hot Pass service as a part of his DirecTV duties. We have an email into him and will update this post when he responds. Perhaps, he can fill us in a little better on the specifics.

Hardcore NASCAR fans loved the idea of Hot Pass, but many were confined to cable TV service through "bundled" deals with MSO's (Multi-System Operators) like Comcast and Time Warner.

Cable TV operators offer a package that includes TV, phone and Internet service for a discounted cost. That was tough for DirecTV to sell against, especially in urban areas where dish placement was not practical.

This major change in the way NASCAR race video will be distributed for 2009 puts the ball squarely in the laps of the Turner Interactive Group in Atlanta, GA. This company operates the NASCAR.com website and offers all the online audio, video and stats features for fans as the races are in-progress.

Internet users saw the future when they enjoyed the online RaceBuddy feature during the six TNT summer races. Now, with Hot Pass ending there may be an opportunity for some innovative thinking from the Turner Group that can result in additional video and audio choices for the NASCAR fans.

This column will be updated on Wednesday morning with the latest information. While we have still not seen an official media release from DirecTV, the word is that the company has decided to cancel the entire Hot Pass service for next season.

Update #1 - As of 8AM Eastern Time on Wednesday, still no comment from either DirecTV or Hot Pass Executive Producer Chris Long.

Update #2 - Confirmed: Thanks to our friend Ray Dunlap for this link (click here) to his personal website that contains his tribute to Hot Pass and confirmation that it has been cancelled.

Update #3 - Click here for the Wednesday story from Jim Utter at thatsracin.com comfirming the cancellation.

Update #4 - Chris Long from DirecTV was kind enough to offer that NASCAR and DirecTV are working on a solution for some additional race video and audio to be made available to DirecTV subscribers free of charge for the upcoming season. What form that would take and what would be offered will be disclosed in a couple of weeks. No doubt this has been a tough time for all concerned.

The Daly Planet welcomes comments from readers. Just click on the COMMENTS button below and follow the easy instructions. The rules for posting are located on the right side of the main page. Thank you for taking the time to stop by during the off-season.
Posted by Daly Planet Editor at 8:00 AM 75 comments: