The Slow Quiet Death Of "Inside NEXTEL Cup" on SPEED 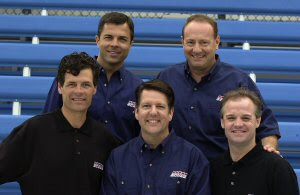 A while back the classic Southern rock band Lynyrd Skynyrd penned a song called "That Smell." It is about a man who must change his ways or die. The most gripping part of the song is the lyric "the angel of darkness is upon you...can't you smell that smell? The smell of death surrounds you."

On Monday night when I saw the dark and cold SPEED TV studio filled with four unhappy and uncomfortable grown men, that song began to play in my head over-and-over again. There was only one reason. I simply cannot wait for Inside NEXTEL Cup Racing to finally die.

Earlier this season, The Daly Planet called for someone to rush in and try to revive this program by switching the host, changing the format, or even changing the dreadful music. Change the shirts, paint the set, get new chairs...anything to help this mess. Unfortunately, the time for effective treatment of this "patient" has passed. We must now plan for the future, remember the good times, and understand one thing very clearly.

This classic NASCAR TV program is dead as a doornail. All the participants are just going through the paces, or "phoning it in" as they say in TV land. The network that brings fans such quality NASCAR programming as RaceDay, Tradin' Paint, Trackside, and Survival of the Fastest has allowed Inside NEXTEL Cup to deteriorate to its lowest level. It is now on life-support and sinking fast.

Dave Despain has been upset since the first day he tried to fill Allen Bestwick's shoes, and failed miserably. Still the host, Despain has absolutely separated himself from the panelists, and follows his own plan throughout the show. His anger is very clear anytime someone "deviates" from his script. His baby is WindTunnel, and he makes it very clear that this "NASCAR stuff" is beneath him. Its just in his contract.

This Monday, SPEED turned the knife on viewers by returning Brian Vickers to the program, and placing him directly next to the man he hates with a passion. Michael Waltrip was rocking the Converse All-Stars and big hair and had every bit of his ego pumped to the max. Vickers spent the first forty-five minutes of this show staring directly at Despain as if when he looked at Waltrip he would explode. Considering the hard time Waltrip and Schrader gave Vickers when he was a regular panelist last year, Vickers might have good reason to go boom.

Greg Biffle is a good guy, a great driver, and has super technical knowledge. Unfortunately, without Kenny Schrader on the set to act as the "den mother" for Biffle and Waltrip, there is no show. When Despain made a crack about Rick Hendrick, Waltrip said very clearly "I don't care what you do on Sunday night, but don't do that here." In other words, you might be responsible for that WindTunnel crap, but this is my show. Let me tell you folks, the love was just flowing. Schrader would have been howling.

A while back, SPEED decided to cancel the weekly guest interview on this series. Called "The Hot Seat," it was sometimes the best feature of the show. In fact, the guest was often asked to stay for the remainder of the program right on the set and act as a fourth panelist. From Mike Helton to Jeff Gordon, everyone in NASCAR has been on "The Hot Seat" and loved it. Every year Schrader used to ask Mike Helton how much money he made...just for information purposes.

At the same time the guest was dropped, SPEED decided to take the remote control away from the panel that allowed them to stop and start the video highlights. Fans remember this machine in the hands of Michael Waltrip making Allen Bestwick so crazy you had to laugh. Bestwick would be having a coronary while Waltrip would be saying "let's see what this button does." One never knew if the panel would take a look at a big wreck, a good pass, or Carl Edwards "hot mom."

The show used to also sneak in a low-budget feature where Michael Waltrip interviewed somebody "of interest" during the week. These features ranged from track security guards to an Iowa pumpkin farmer. As usual with Waltrip, you just never knew. His take on the world was always just a little bit "off camber."

Originally cast aside as being boring and not a "Cup driver," the absence of Johnny Benson has been felt since the moment he left. The chemistry of this show needed a personality like Benson to counteract Waltrip and Schrader. Johnny was often the voice of reason while the other two continued to howl with laughter or question Michael's personal grooming issues. Benson was the blue-collar working man who showed up, had fun, gave it his all, and went home. While we all wanted to meet Schrader and Waltrip in a bar, most of us identified with Benson all too well.

Now, this season's cast has staggered to June on Monday nights where they are the only NASCAR program in sight. Surrounded by car auctions and celebrity "paybacks," three guys try to talk NASCAR to absolutely no one. Gone is NBS 24/7, gone is Beyond The Wheel, and gone is any hint that SPEED values Mondays as a NASCAR night. No doubt, when this show goes away in November, Mondays will become another night of Pinks, Unique Whips, and Paybacks.

Inside NEXTEL Cup is the only original remaining show that was created when the SpeedVision Network started, and is still on the air today. Once expanded to ninety minutes, and once cancelled, this series has somehow managed to stay afloat. Don't forget, the first episode of the show called Inside Winston Cup Racing aired after the Daytona 500...in 1996.

All TV series eventually come to an end, and often with a whimper and not a bang. This show is quietly edging its way toward conclusion on a lonely night with no audience and bored panelists. There is no fun, no laughter, and nothing spontaneous will ever happen while Despain is in charge. There are no guests, nothing to fool around with, and even the viewer mail is "sanitized." What a shame.

Those of us lucky enough to be fans of this series for the last ten years will remember the fun, the sincerity, and the camaraderie of the original crew. We will also remember the harsh changes, the bruised egos, and the ruined chemistry. All this done by one executive who is no longer even employed by SPEED. Inside NEXTEL Cup will finish its run this season, and I have a feeling it will slip quietly into the night never to return. Maybe, that is the best thing that could happen.

The Daly Planet welcomes comments from readers. Simply click on the COMMENTS button below, or email editor@thedalyplanet.tv if you wish not to be published. All email is confidential. Thanks for taking the time to stop by.
Posted by Daly Planet Editor at 9:16 PM 55 comments:

ESPN Puts Bestwick In The Booth at Milwaukee

Today's press release from ESPN contained an interesting note for veteran NASCAR fans. Alongside of Rusty Wallace and Andy Petree in the announce booth at the Milwaukee Mile will be...Allen Bestwick calling the play-by-play action.

This is certainly a great opportunity for Bestwick to continue to impress the ESPN folks as he did when he stepped-up and hosted several live editions of NASCAR Countdown, the Busch Series pre-race show. Bestwick brings a distinctive style that allows the other analysts to be the stars, while he simply directs traffic and controls the flow of the telecast.

No topic has generated more email at The Daly Planet that Allen Bestwick. When he was fired from Inside NEXTEL Cup Racing on SPEED after many years as the host, fans really felt a personal sense of loss and outrage. It did not matter if his style made you crazy, or you absolutely loved it. Bestwick always shows up, is always prepared, and is always a "giver" when he is on-the-air.

Good luck to Allen in Milwaukee, and when ESPN releases the name of the person hosting NASCAR Countdown this weekend, The Daly Planet will bring it to you.

UPDATE: ESPN has announced Allen will also host the pre-race program called NASCAR Countdown, so it will be double-duty for AB at Milwaukee.

The Daly Planet welcomes comments from readers. Simply click on the COMMENTS button below, or email editor@thedalyplanet.tv if you wish not to be published. All email contact is kept confidential. Thanks again for stopping by.
Posted by Daly Planet Editor at 12:44 PM 3 comments: