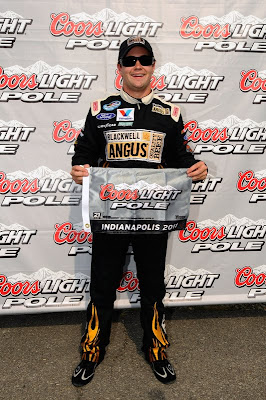 This is the first race for Marty Reid since being told he will not be returning for the ESPN Sprint Cup Series telecasts this season. Tonight, Reid is with Rusty Wallace and Ricky Craven as the Nationwide Series races for the last time at a track most of us know as Indianapolis Raceway Park.

Shannon Spake, Rick DeBruhl and Jim Noble are going to be the pit reporters. This is a short track with the normal amount of struggles for grip and track position. The Camping World trucks put on a good show Friday night and managed to race side-by-side without much of a problem.

ESPN's goal tonight is simply to follow the best action on the track without once again getting caught-up in the glow of the Sprint Cup Series drivers competing. There is a healthy race for the NNS driver's championship and the field is diverse enough to put on a good show for TV.

The comments are always interesting when Wallace is put on the spot when his son Steven, a driver in the NNS in a car Rusty owns, gets himself in a tight spot. This type of short track is called a "payback track" because spinning another car out often results in no damage and just a loss of position. It remains to be seen if the younger Wallace is going to be on the receiving end of such actions.

This post will serve to host your comments on the Nationwide Series telecast from the ESPN gang. To add your TV-related opinion, just click on the comments button below. Thanks for taking the time to stop by The Daly Planet.