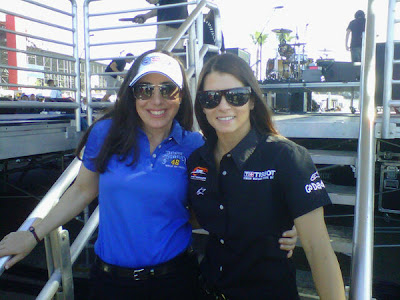 That's Auto Club Speedway president Gillian Zucker smiling because Danica is back. The California crowd might not know many of the Nationwide Series regulars, but they all know Danica.

It's Allen Bestwick who will lead ESPN2 on the air at 4PM ET with the NASCAR Countdown show. Brad Daugherty and Rusty Wallace will be alongside Bestwick in the Infield Pit Studio. Tim Brewer will be in the Tech Garage.

Auto Club Speedway has been struggling for attendance in the Southern California market. While Danica's return might have given the speedway something to use in advertising, it's doubtful that Cali fans are going to turn out for this race in force.

On the TV side, there is no college football game before the race or the pre-race show this Saturday. The West Coast start time forced ESPN2 to move college product to other ESPN networks.

This post will serve to host your comments on the TV coverage by ESPN of the Nationwide Series race from Auto Club Speedway. To add your opinion, just click on the comments button below. This is a family-friendly website, please keep that in mind when posting. Thanks for stopping by.
Posted by Daly Planet Editor at 3:30 PM 192 comments:

ARCA Peeks At NASCAR's Past 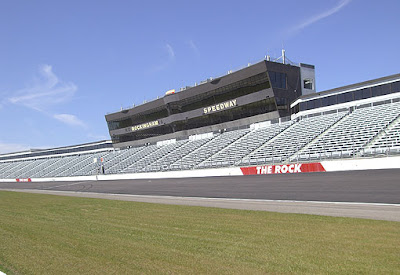 The Rock holds special memories for fans who made the drive to Rockingham, NC for the NASCAR races over the years. Now privately run, the track hosts some smaller series and is a popular rental for NASCAR teams who want to test.

Today at 1:30PM ET SPEED is telecasting the final ARCA race of the season from the Rock. Rick Allen and Phil Parsons are going to call the race. Ray Dunlap and Jim Tretow are on pit road.

The ARCA Series limps into the Rock like so many other racing series around the nation. Title sponsorship is gone, teams are struggling to make ends meet and the "rent a ride" boom is in full swing.

Patrick Sheltra, Craig Goess and Tom Hessert are the three ARCA regulars who are battling it out for the championship. Sheltra is a Florida native backed by his family-owned construction business. New Jersey's Goess is a Legends car veteran in his second ARCA season racing for Eddie Sharp.

Hessert is the most interesting story of the three. Click here for a recent story on the philly.com website about Hessert's family sponsorship and the vast difference in culture between his team and most of the ARCA regulars.

Rockingham offers a narrow backstretch where accidents happen quickly and a wide and well-banked frontstretch that has made for exciting side-by-side action for many years. SPEED's live ARCA coverage is rather fundamental and is basically a throwback to the days of limited equipment and "old school" racing coverage on TV.

With current racetrack owner Andy Hillenburg unable to afford installing a SAFER Barrier, it does not look like NASCAR's truck series or even the regional series will be returning to the Rock anytime soon. This maybe the only opportunity for some fans to get a glimpse into NASCAR's past.

We welcome your comments on the coverage of the ARCA race from Rockingham on SPEED. To add your opinion, just click on the comments button below. This is a family-friendly website, please keep that in mind when posting. Thanks for taking the time to stop by The Daly Planet.
Posted by Daly Planet Editor at 11:30 AM 36 comments: