Friday Night Under The Lights on ESPN2 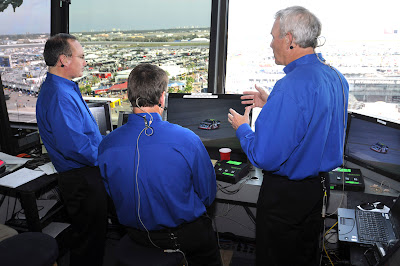 The rain is gone and the racing is about to begin. Friday night brings the NASCAR on ESPN team to the Lowe's Motor Speedway for the Nationwide Series race.

Allen Bestwick and the NASCAR Countdown crew will start the night at 7:30PM. Bestwick will have his regular crew of Brad Daugherty and Rusty Wallace alongside for this thirty minute pre-race show.

At 8PM it will be Dr. Jerry Punch, Dale Jarrett and Andy Petree who will call the Nationwide Series action. Tim Brewer will be along in the Tech Center and Bestwick and company will remain in the Infield Pit Center. Down on pit road will be Jamie Little, Shannon Spake, Dave Burns and Mike Massaro.

There are lots of stories in the Nationwide Series event and several of them cross-over into the Cup Series. Both Kevin Harvick and Carl Edwards will be in the field on Friday night. There will also be the normal storyline of the Nationwide "regulars" led by Brad Keselowski going up against the Cup drivers racing in the event.

This is a fast and tough track for TV. The only pause is on the backstretch and it only lasts a couple of seconds. Talladega, this is not.

This post will serve to host your comments on the Nationwide Series race on ESPN2. To add your TV-related comments, just click on the COMMENTS button below. The rules for posting are located on the right side of the main page. Thanks for taking the time to stop-by.
Posted by Daly Planet Editor at 6:32 PM 296 comments: