Every Day Is A Danica Day (Updated Mon. AM) 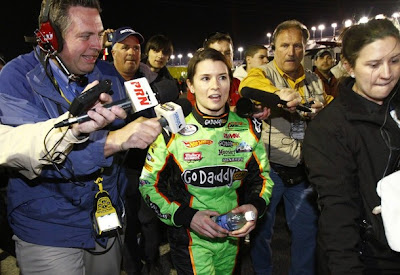 Update: JR Motorsports made it official at 8AM Monday. Danica Patrick will drive in the Nationwide Series race at Daytona. Waiting for confirmation that Kelly Bires is out for this event. Danica will be locked-in through points from 2009. She will have the points from the #11 car, not the #88 as previously reported in media sources.

Here are some quotes and information from the JR Motorsports press release:

“To be the one driving that Go Daddy car at Daytona means a lot to me,” Patrick said. “Racing in the Nationwide Series race was my goal during this entire two-month preparation process, but we wanted to make sure it was the right thing to do. The ARCA race was a blast, and I’m not ready for my first Daytona Speedweeks to end just yet. I want more racing.”

Patrick’s entry in the Drive4COPD 300 puts her in a JR Motorsports tandem with Dale Earnhardt Jr., who will drive the No. 88 Hellmann’s Chevrolet. Patrick will continue her Nationwide Series schedule on Feb. 20 at Auto Club Speedway (Fontana, Calif.) and Feb. 27 at Las Vegas (Nev.) Motor Speedway.

Patrick is guaranteed starting positions in all three races based off JRM’s acquisition of points from CJM Racing’s No. 11 team, which finished 15th in the 2009 Nationwide Series owners point standings.

“I think Danica proved to everyone that she can compete in stock cars at a high level, and right now seat time is extremely important,” Kelley Earnhardt said. “She has worked extremely hard during the past two months for this opportunity. Her dedication and work ethic is infectious.”

This is the TDP original column from Sunday, Feb 7th:

NASCAR is getting a lesson in media manipulation and it's from a young woman who has never run a lap in any NASCAR racing series. Her single claim to fame on the track is one ARCA race at Daytona and a mediocre IRL career.

Danica Patrick is about to take advantage of a slow Monday and announce her decision about racing in the Nationwide Series race at Daytona sometime during the day.

Shortly after that information was released on Sunday afternoon, David Newton of ESPN got back into the familiar groove of using anonymous sources to offer this story. Click here to read it. Newton says the deal is done.

A couple of hours later it was Jim Utter from thatsracin.com who offered the same information. Utter said Danica would make it official early on Monday morning. Click here to read his entire story.

Over the weekend Kevin Harvick won the Bud Shoot Out, Bobby Gerhart the ARCA race and Mark Martin the Daytona 500 pole. Not a lot of that will matter once Patrick makes it official that she will be on the track Saturday with some of the top drivers in the sport at very high speeds.

If the announcement is made at 8AM, it will not take long for the aftershocks to be felt coming from the Bristol, CT area. Over the last three years, ESPN has been faced with an opening Nationwide Series event that often resembled Sprint Cup Series practice.

If Patrick joins the fray, it will give ESPN an opportunity for the kind of focused sports news coverage the network has become famous for doing. ESPN has a lot of media outlets and when they are all focused on promoting one thing, it's powerful.

ESPN2 will also be carrying the Nationwide Series practice on Thursday and qualifying on Friday. Two good opportunities to build up the excitement for the Saturday afternoon race. You can bet that will be the case if Patrick is in the event.

Since the new TV contract began in 2007, ESPN has been struggling to define exactly what the Nationwide Series really has become. Top Sprint Cup drivers use unlimited resources to mount campaigns for the series championship. The only personality blip on the radar was Brad Keselowski who subsequently moved on to the big leagues.

Having Patrick for Daytona and Fontana will certainly be a boost for Marty Reid, ESPN's new play-by-play announcer. This will also give Dr. Jerry Punch an opportunity to refresh his pit reporter skills while dealing with a very high profile driver.

We will use this post to get your opinion on this topic and then update it on Monday morning if and when the announcement is made. Patrick and her handlers have proven to be masterful at media management and Monday should prove to be no different.

To add your opinion on this post, just click on the comments button below. This is a family-friendly website, please keep that in mind when posting. Thank you for taking the time to stop by The Daly Planet.
Posted by Daly Planet Editor at 8:00 AM 81 comments: