"Race Hub" Discovers The Power Of The Hour 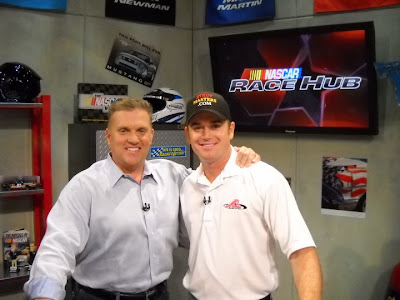 Ever since SPEED rolled-out the weekday program called Race Hub, it has been fun to watch the series try to find its footing on the slippery slope of NASCAR TV news.

Back in 2007, ESPN introduced NASCAR Now with disastrous results. The network had to step-in rather quickly and try to figure out how to solve the credibility and knowledge gaps that existed between the "Bristol gang" and the NASCAR community in North Carolina.

Click here to read a TDP column from May of 2007 that describes the first day that big time change came to the NASCAR Now set. After months of chaos, one of those NASCAR TV types showed up to host the show. Only he wasn't from North Carolina, he was from Rhode Island. His name was Allen Bestwick.

Here are some excerpts from that column:

After an endless moving disaster of "NASCAR illiterate" hosts since February, one of the most respected NASCAR broadcasters was in Bristol, CT. Reporters Marty Smith and Terry Blount did the best they could to hide the smirks on their faces, but they knew well in advance that there was a new sheriff in town.

It may have been the first time for many ESPN staffers that they experienced a true NASCAR broadcaster hosting "their" show. If there was ever a moment when the glaring difference between "those who know" NASCAR and "those who ESPN says know" NASCAR was front-and-center, this was it. Can you imagine if ESPN used Bestwick on the one hour NASCAR Now Monday show? That would make any fan smile.

Needless to say, the rest is history. ESPN did use Bestwick for the Monday show, asked veteran Mike Massaro to host fulltime and hired Nicole Briscoe away from SPEED where she was in the middle of her own on-air disaster. Today, NASCAR Now is the flagship show for ESPN's coverage of the sport.

As we watch SPEED try to get organized, it's easy to understand what Race Hub has to offer. As real estate folks always say it's location, location, location. Most of the NASCAR shops are just a short drive away from the SPEED studios. As this show has grown, studio guests have become a centerpiece.

The network is still gun-shy and continues to use two co-hosts for a thirty minute pre-recorded show. This week, SPEED extended the weekday programs to one hour. Monday, TV viewers found out just how powerful that can be.

Race Hub was finally loaded with a mix of personalities, features and news. In one-hour form, this could be a franchise series for SPEED.

Steve Byrnes is clearly the right host for this program. A studio veteran, Byrnes has been making his living on the road but has a long history of hosting indoor series. This unscripted environment plays to his strength. Monday showed once again his ability to keep a sense of humor about the sport even while asking the tough questions.

A good balance of multiple guests, edited features, race highlights and in-studio analysis set a tone that SPEED viewers just don't get on any other program. Jeff Hammond was in the studio Monday and again reminded us of just how much more he has to offer than his current Hollywood Hotel role. Hammond and Byrnes are a great pair on TV and it showed.

The hour format also allows for soft features and historical reminders. What better time to roll-out this extended format than during the Hall of Fame induction week. Reminding viewers of the past is an important part of understanding how NASCAR got to the point of national interest and global distribution.

A one-hour Race Hub show is also an important vehicle for SPEED to promote programming, race schedules and NASCAR charities. JD Gibbs was a Monday guest and at the conclusion of his interview plugged his special charity event. Is there anything more poignant than a father holding a celebration because his child has beaten Leukemia? Click here for the finishlinefestival.com link.

ESPN and SPEED's programs can easily co-exist because they are two completely different approaches to the same sport. The buttoned-up suits and ties of the NASCAR Now panel on the immaculate HD set are a far cry from Kyle Busch sitting at the Hub Pub in sneakers and jeans. Both programs get their message across, just in very different styles.

Race Hub will continue to be one hour this week at 7PM ET and 8PM Pacific for the West Coast re-air. Steve Byrnes returns to host on Tuesday with Rick Allen. John Roberts reports from the Hall of Fame. Ryan Newman and Alan Gustafson are the guests.

If you have watched Race Hub, let us know what you think of the series. To add your comment on this topic, just click on the comments button below. This is a family-friendly website, please keep that in mind when posting. Thank you for taking the time to stop by The Daly Planet.
Posted by Daly Planet Editor at 11:30 PM 14 comments: