NASCAR On FOX Limps Into Darlington 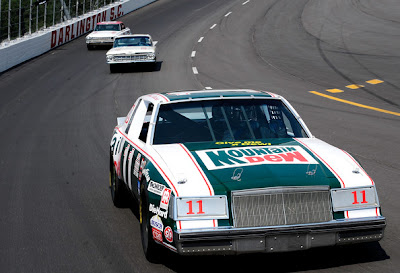 After failing to profile the disabled soldier for whom the race was named during the pre-race show, FOX then struggled though what should have been a simple telecast on a short track that the network had visited many times before.

Here are the TV results from Sports Business Daily:

Overnight ratings for the Sprint Cup Series race from Richmond dropped from last year's already subpar level. FOX drew a 3.4 overnight for the race on Saturday night, down 8% from last year (3.7) and down 19% from 2008.

This marks the lowest overnight rating ever for this race on broadcast television.

Additionally, the 3.4 is tied as the second-lowest overnight ever for a NASCAR race on FOX, ahead of only last year's Subway Fresh Fit 500 (3.3).

Once the race was underway, the first round of green flag pitstops put NASCAR in an interesting position. Only nine cars were on the lead lap. Our friend Phil Allaway over at Frontstretch.com did a good job of describing what happened next on TV:

Jimmie Johnson, running in ninth, was fighting with leader Kyle Busch to stay on the lead lap. Just as Busch got a fender in front of Johnson, the caution came out for debris. No one ever found that debris and showed it to us. Now, it could be assumed that there was none, meaning that the whole yellow was a sham. Maybe there was some, but they never found it. I don’t know how many cameras FOX had at Richmond last weekend, but they probably should have been able to pick up something. Or, at the very least, notify the audience that they could not find the debris.

Allaway went on to reference two other popular topics. Those were the continual focus on the race leaders and the extensive use of in-car cameras. Fans stopped by after the race and left these comments:

Again we were "treated" to a very poor mixture of camera shots giving neither the experienced racing viewers or the NASCAR newbies in my home Saturday night a full sense of what was happening during the race. (KoHoSo)

I could not follow what was going on whatsoever. Confused broadcast, confusing the fans. Sure, I can read that tracker at the top and miss the action that should be on TV. But they never explained what was going on to make those movements happen. (JohnP)

Fox refused to establish any kind of flow or provide context for what the cameras were showing. They must have a bingo caller in charge of switching cameras, surely no one with any broadcast experience could do that bad of a job. (bevo)

I always look forward to the short track races, and Richmond is one of the best. Last night, I had no clue as to what was actually taking place on the track. The in car cams and isolated shots of one car running alone gave no insight as to how the race was developing. No full field rundowns, no explanations of why so many cars had gone laps down so early...it was a mess. It made me realize why my interest in NASCAR has been waning the past couple years. If I can't watch on TV and get caught up in the excitement, there's not much point in watching. (Sally)

Toward the end of the race, FOX analyst Darrell Waltrip offered several different versions of what he thought would happen and who would win. Waltrip and Larry McReynolds have been set free this season to talk overtop of TV veteran Mike Joy. Once again in Richmond, three voices tried to call the action down the stretch.

After being called out by several mainstream journalists for poor post-race coverage, FOX has twice made a last minute switch to the SPEED cable network for additional programming. That was again the case in Richmond.

We have been told this decision is made on the fly according to the circumstances of the race. This Saturday in Darlington brings yet another night race. It seems a bit ironic that SPEED is on location taping the Victory Lane show for a delayed Sunday broadcast while the SPEED network is used by FOX for the live post-race show.

After years of asking, we will repeat the question. On the Saturday night Sprint Cup Series races, why not do Victory Lane live after the race for the full hour and then replay it Sunday in the scheduled timeslot? Fans can simply change channels whenever the race ends and SPEED will get a solid TV rating.

The format for Darlington is the same as last week. A two-hour RaceDay show on SPEED at 5PM, followed by a thirty minute pre-race show on FOX and then the live race. This Saturday SPEED has an AMA Supercross Special on at 10PM for several hours. It will be interesting to see if the powers at FOX decide to cut into this high-profile program with the live NASCAR post-race show.

TV news updates: SPEED has no comment, but it looks like Jimmy Spencer's What's the Deal show seen on Monday nights has been cancelled. Also, it has been confirmed that Darrell Waltrip will join NASCAR RaceDay on SPEED for the six summer races televised by TNT. Kyle Petty will be gone to the TNT booth as a race analyst.

Please join us on Saturday night for the live TV blog. You can follow us on Facebook and Twitter with continually updated content anytime. We also welcome your comments on this topic. To add your opinion, just click on the comments button below. This is a family-friendly website, please keep that in mind when posting. Thank you.
Posted by Daly Planet Editor at 4:30 AM 42 comments: