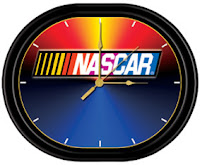 With all of NASCAR's national touring series underway this weekend there is hardly room on the TV schedule for the Friday action. SPEED and ESPN2 will be the NASCAR TV partners on-the-air with a long day of all types of programming.

It will be SPEED's John Roberts who will kick-off the day from Michigan with NASCAR Live at 11AM Eastern Time. This thirty-minute edition will set-up the schedule and review the news stories with Hermie Sadler reporting for Roberts from the garage area.

Next up will be the Sprint Cup Series cars on the track at Michigan for practice at 11:30AM. It will be Steve Byrnes calling the action with Jeff Hammond and Larry McReynolds alongside in the booth. Down in the garage will be TNT's Ralph Shaheen and Marty Snider. Practice should run about ninety minutes.

Roberts returns to run-down the teams outside of the Top 35 who must qualify on time in the Go or Go Home show at 1PM. This fast-paced program has veterans Randy Pemberton and Bob Dillner talking to the teams in question from the garage.

It will be the Craftsman Truck teams who take to the track for practice at 1:30PM. That will bring Rick Allen and Phil Parsons on-the-air along with Ray Dunlap and Adam Alexander as reporters. Michael Waltrip may be able to make this session, depending on his Sprint Cup duties.

The big boys come back for Sprint Cup qualifying at 3PM. Byrnes, Hammond and McReynolds return and this time it will be Matt Yocum and TNT's Lindsay Czarniak handling the interviews on the grid.

On a non-NASCAR note, it will be the ARCA Re/Max Series running in Michigan after qualifying is over at around 5PM. This is a big track, and this season lots of ARCA competitors have the old NEXTEL Cup cars underneath them. It should be interesting.

ESPN2 will be next, and this one should be a challenge. First, it will be NASCAR Now at 6PM for thirty minutes. This TV series has been walking a very careful line since a civil lawsuit was filed by a former NASCAR employee claiming both sexual and racial harassment against the sanctioning body.

Friday will finally bring more definitive reporting and information. Only thirty minutes after NASCAR Now is over, ESPN2 will televise Nationwide Series practice.

ESPN has all the Nationwide Series races, the final seventeen Sprint Cup Series races and the only daily NASCAR show on TV. The company is by far NASCAR's biggest TV partner. ESPN also prides itself on its sports news reputation.

How ESPN2 deals with the lawsuit issue in the studio and at the track is going to be a interesting to watch. As so often happens when things are tough, it will be TV veteran Marty Reid handling the hosting duties from Kentucky Speedway with Rusty Wallace and Andy Petree alongside. Reid is not one to mince words, and is the announcer who called-out Boris Said earlier on NASCAR Now.

While there is no doubt that this team will cover the Nationwide stories like Joey Logano and Brad Keselowski, they cannot avoid the wave that is slowly building and heading directly for the Nationwide beach. What Wallace and Petree say or do not say about the Grant lawsuit will be watched very carefully by a lot of fans.

This topic will spill-over onto SPEED as Trackside is up next at 8PM from the SPEED Stage in Michigan. Byrnes, Hammond, McReynolds and Elliott Sadler are going to have to deal with some uncomfortable issues on this episode. Scheduled guests include Kasey Kahne and AJ Allmendinger.

The NASCAR TV night closes with Tradin' Paint at 11PM. Perhaps, media guest Joe Menzer from NASCAR.com had no idea what an exciting program awaited him when he agreed to appear.

Panelist Kyle Petty only Wednesday announced a merger of Petty Racing with an investment banking firm and now a multi-million dollar racial and sexual harassment suit has been filed by a former Nationwide Series official. John Roberts will do his best as host to organize this thirty minute program.

This post will serve to host your TV-related comments about the programming listed above. To add your opinion, just click on the COMMENTS button below. The rules for posting are located on the right side of the main page. Please do not post links in the comments section before contacting me by email so I can verify the link. Thanks.
Posted by Daly Planet Editor at 8:58 PM 34 comments: