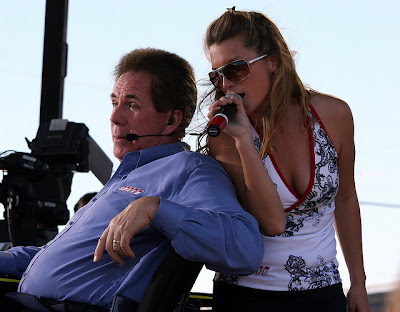 A reader emailed me today and asked that I watch a portion of the FOX Sports coverage of the MLB game between the Boston Red Sox and the New York Yankees.

When I turned on the game, it was quickly apparent why the reader emailed. Never during the thirty minutes that I watched was there an establishing shot of the entire field. Never once was there a camera view of the outfield, so fans could see the "shifts" teams put on for select hitters.

Instead, the production was an endless parade of faces. The camera shots were so tight you could not even see the player's belts. Just chest-high tight shots of batters, pitchers, managers and players in the field.

In a word, it was horrible. The director reluctantly pulled out wide just before each pitch. It was just wide enough to show the pitcher and the batter, nothing more. After every pitch that made it to the catcher's mitt, the parade of endless close-ups began again.

I honestly don't know how baseball fans watched that game on TV. Just like our complaints about NASCAR on FOX, there was no perspective for the TV viewers. It was nothing more than a deliberate attempt to build drama that was not there.

Tonight at 7PM, Chris Myers will again take to the outdoor pre-race stage and go into his act as the bumbling fool. Darrell Waltrip will be alongside and continue preaching his own version of the truth about the sport and everything else that goes along with it. Jeff Hammond will roll his eyes and try to get a word in edgewise.

What began in such a promising manner at Daytona is now falling apart at the seams. Instead of innovating from this new location surrounded by fans, FOX has simply given Waltrip a new pulpit from which to preach. His "Revved-up" segments provide Waltrip the ultimate last word before sprinting to the TV booth for three more hours of telling fans what to think.

Update: Being told FOX is moving the entire pre-race into the Hollywood Hotel due to the high winds at the race track. (6:15PM ET)

FOX is coming off another flat performance at Martinsville that reflected in the ratings. Instead of showing the race as fans in the stands would see it, director Artie Kempner continued to be fascinated by the decades-old technology of the in-car camera.

Texas has the potential for long green flag runs and Kempner may well continue this apparent FOX approach of "hyper-tight" coverage. Last week, Kempner fell apart on the final lap and had to actually replay the cars on the lead lap crossing the finish line. That is the ultimate humiliation.

Kempner's attempt at drama at the finish consisted of showing the winning crew chief take off his headset and climb down from the pit box. Meanwhile, the entire field was racing to the checkered flag with only the first few cars that happened to get in the camera frame shown live.

The disconnect between FOX and the fan base is complete. Mike Joy and Larry McReynolds have been muted. FOX has re-signed Waltrip through 2014 and designated him as "the show." Even the best pit reporters in the business get only moments to spit out a sentence or two before Waltrip passes judgement.

Steve Byrnes, Matt Yocum, Krista Voda and Dick Berggren may need to bring a chair if the race consists of long green flag runs and pit stops where every team takes four tires. Pit stop times might be critical, but without a key mechanical failure or big caution flag period the news from pit road might consist of slim pickings.

Under the lights, this race may take on a new dynamic. That is certainly the hope of NASCAR. There was a big crowd for SPEED's RaceDay show and that is a good sign. There is a strong fan base in the area and the TMS promotions team is very effective in that market.

While David Ragan might be on the pole, viewers know that Dale Earnhardt Jr. and Kyle Busch are two big FOX favorites. With Carl Edwards tied to ESPN, it should be interesting to see how FOX treats Edwards should he dominate.

Ford is also on the verge of a strong race as a brand. It's no secret that Waltrip and Toyota are well acquainted on many levels. Waltrip may have recently added Subaru to his car dealership interests, but Toyota has a soft spot in his heart.

This post will serve to host your comments on the NASCAR on FOX coverage of the Sprint Cup Series race from the Texas Motor Speedway. To add your TV-related comment, just click on the comments button below. This is a family-friendly website, please keep that in mind when posting. Thank you for stopping by.