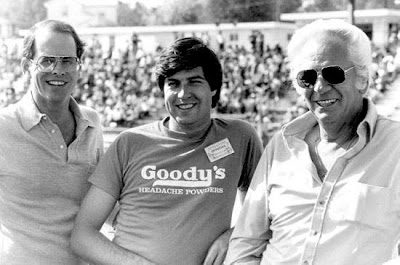 Since ESPN has both the Sprint Cup and Nationwide Series race telecasts this time of the season, SPEED has been rotating various TV personalities through the lead announcer position to work on the practice and qualifying coverage.

Perhaps you might recognize that young man in the center of the picture. Mike Joy has been in the racing game for a long time. That is Jim France on the left side of the picture and the late Ed Yerrington on the right.

Joy will be in Michigan this Friday and Saturday anchoring the network's coverage of the Sprint Cup Series activity. Joy is on the air Friday at noon ET, but his fellow announcer Rick Allen will start the day at 11AM with Camping World Truck Series practice.

There is a lot going on in the sport right now and SPEED has simply been outstanding at getting information on these topics across to fans in a timely fashion. While John Roberts is known for hosting the RaceDay extravaganza on Sundays, he is very effective with his NASCAR Live shows on Fridays and Saturdays.

Creating the Monday through Thursday hour-long RaceHub series has been the best thing SPEED has done in years. By the time coverage begins from the tracks on Friday, viewers are already up to speed on the topics in the news and issues to be discussed.

This week ESPN's Marty Smith offered a factual report on NASCAR Now that Danica Patrick is coming to NASCAR starting next season. Greg Biffle and Boris Said also traded verbal jabs on RaceHub this week over the Watkins Glen festivities.

JD Gibbs also appeared on both daily NASCAR TV shows, speaking frankly about the fact he was negotiating with Carl Edwards to make a move to JGR but the pieces just did not fall into place. Edwards himself has yet to comment on his owner Jack Roush saying Edwards will leave the Nationwide Series as a driver to join ESPN in 2012.

One positive thing about SPEED's coverage is that much of it is streamed online for Sprint users through the NASCAR Mobile and SprintTV apps. With NASCAR lagging many years behind in online distribution, this feature is handy for those brand-loyal fans who stayed with Sprint.

We invite you to post your observations on these topics and the Friday TV coverage from SPEED as we move through Friday. We will also update any breaking news on this post. To add your comment, just click the comment button below.

Thanks for taking the time to join us and we look forward to your opinions.