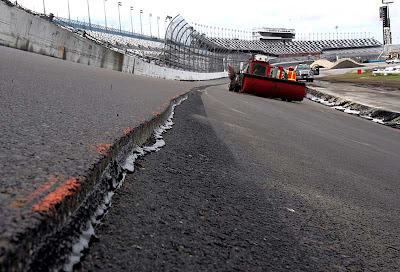 What a week it's been for big topics. It's really not the off-season for NASCAR TV and media issues. Next week should bring an update on possible TV or video streaming coverage of the December tire test at the newly repaved Daytona International Speedway.

Also, we should have dates for the return of Race Hub in January and an update on possible video streaming for 2011 racing weekends.

Meanwhile, here is a brief recap of some issues we addressed over the past several weeks. Many of these topics are going to be sprouting up again before the 2011 season begins. Click on the title to read the entire column and leave your comments.

By request: Hail to the Chief originally published November 23, 2010.

The topic was Brian France's interview with the NASCAR media in Homestead. Here is an excerpt:

"ESPN is our partner and they have been an enormously good partner, and they actually have a younger demo on ESPN network than does their sister network, ABC. I suspect we'll sit down in the off-season and talk about that and we are going to share everything with them and they have been a great partner. By the way, I think the broadcast has been as good as I've seen in a long time. I think the energy level and the calling of the action, the on-air talent, I think is top-notch right now on their network, and they have been working at that for a few years to get all of the things just right, and I think they have."


One of the most popular TV personalities this season has been Ray Evernham. A while back, he shared some news and promised some more shortly.

Waiting For Ray Evernham To Get Back In The Game was originally published on November 29, 2010.


This week came news that both the NFL and Howard Stern would be heard on Sirius Internet radio next year. Online coverage is the way to go. With a full time NASCAR channel already on Sirius but not available online or by cell phone app, how much longer can the parties involved allow this situation to go on?

NASCAR's Got A Sirius Situation was originally published on December 2, 2010.


NASCAR has hired an outside marketing company to reshape the media interface with fans including social networking, television coverage and radio content. The sport's public image next season will be crafted by product marketers. That sounds like fun, right?

NASCAR Fans About To Be Rebranded was originally published on December 3, 2010.

Editor Greg Bailey of the Gadsden Times has his own way of explaining the changes:

"The various press releases announcing this are filled with corporate-speak gobbledegook that numbs one’s brain. Translating it into English, NASCAR is putting its media relations, marketing and team/sponsor relations efforts under one roof in hopes of better selling a sport that has fallen on hard times."

Taylor (marketing and PR company) gets to continue to represent its existing NASCAR clients. It will now also advise NASCAR on how to proceed with a marketing-driven agenda across the board. Finally, Taylor will create the systems to manage all aspects of the media associated with the sport.


Some folks want to see it all live, some think it makes no sense on TV and others only want the highlights without all the scripted speeches. So, that led us to ask the question.

Does The Sprint Cup Series Banquet Belong On TV was originally published on December 7, 2010.


Finally, we turned out attention to the struggling NASCAR Hall of Fame. It needs new guests, repeat business and some interesting exhibit inside that changed every single day. Now, what could that be?

Can ESPN Save The NASCAR Hall of Fame was originally published on December 9, 2010.

Reporters like Marty Smith, Ryan McGee, David Newton and Shannon Spake all live in the Greater Charlotte area. Briscoe does as well. Add Dale Jarrett, Andy Petree and Rusty Wallace to that list. You get the point. It only makes sense to originate the daily program covering the sport from where the news is happening.