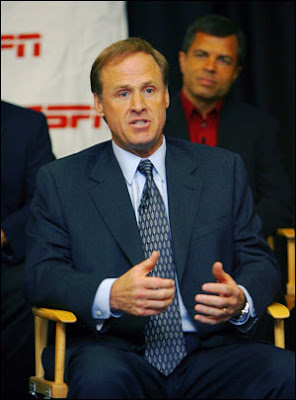 Friday begins the ESPN and ABC coverage of NASCAR's Sprint Cup Series for 2008. This year, the NASCAR on ESPN team comes into this seventeen race stretch with a completely different mindset than 2007.

Gone is the overblown hype, the stick-and-ball announcers and the SportsCenter updates in the middle of green flag racing. Gone is Draft Track every five laps and the music videos that served to deliver unique messages like "shut-up and drive." ESPN is finally ready to race.

This past Tuesday, ESPN conducted a media conference call with several people who are going to be important to the success of this season's coverage. Rich Feinberg, the VP of Motorsports, was the TV executive who took the questions. His enthusiasm and excitement about this season was unmistakable.

Along with Feinberg were Dr. Jerry Punch, Dale Jarrett and Andy Petree on the phone. Each of these three personalities took turns answering questions from reporters while Feinberg provided a background perspective on ESPN's overall NASCAR efforts. The conference call told the story of what ESPN hoped to deliver to the fans from Indy through the end of the season.

There was, however, one thing missing in all of this. Fans who have watched ESPN's coverage of this sport since February know it all too well. The person who has been the "ironman" of NASCAR on ESPN was not on the conference call. His name was not mentioned in the conversation. No NASCAR reporter even asked a question about him.

This would be a very good time and a very good place to mention it. His name is Allen Bestwick. Never in my experience has one individual been such a powerful force in just six months on TV in a new role. Bestwick has almost single-handedly restored credibility to ESPN's coverage of NASCAR.

It was not the arrival of Dale Jarrett on a full-time basis. It was not the second season of Jerry Punch or Andy Petree. It was not the addition of Ray Evernham. The pit reporters are the same and only Nicole Manske is new in the studio. What changed is that Bestwick got another chance on network TV and is making the most of it.

This season Bestwick took the crumbled franchise of ESPN's disastrous 2007 NASCAR coverage and set-out to change it the old fashioned way. That would be to work harder than anyone else toward that goal and silently challenge others to match him.

Bestwick took the unwatchable Monday hour of NASCAR Now and fashioned a gem of a TV program. He has led an ever-changing panel of NASCAR personalities through topics ranging from race highlights to tapered spacers with dignity and good humor.

This effort opened the door for the solid success of Manske and Ryan Burr on a program series that was the laughingstock of NASCAR TV last year. Today, NASCAR Now is the first place fans turn for news and information about the sport on TV.

At every Nationwide race, it is Bestwick who sets-the-table for the "upstairs" featured announcers. The Infield Pit Center used to be filled with memories of Brent Musburger and Suzy Kolber. Those have long since been banished and replaced with interviews of great guests, interesting debates among panelists and the conversion of Rusty Wallace and Brad Daugherty into viable TV commentators.

Back in February, Bestwick led the ESPN TV team through a three hour rain delay by doing what he does best...working. Under the California gray skies, Bestwick made the commitment on-the-air that ESPN was staying live at the track. In essence, he challenged the TV crew to deliver. They did just that. Guests came-and-went, conversations addressed diverse racing topics and all of the on-air talent rallied for this cause. In my opinion, it was the turning point of the season and started the real momentum building.

This weekend, Bestwick will move to fill Suzy Kolber's chair. Last season, this was a chair to which he could only aspire. There is seemingly no part of this year's NASCAR on ESPN coverage that Bestwick has not touched. Thursday and Friday, he anchored from the Infield Pit Studio for an hour-long live NASCAR Now alongside Wallace and Daugherty.

In the minds of TV viewers, Bestwick is the face of NASCAR at Indy for ESPN. Punch, Jarrett and Petree were nowhere in sight. The big day will be Sunday, when Bestwick finally steps-into the high-profile role of infield host for the Sprint Cup Series.

Many NASCAR fans first found Bestwick over a decade ago rolling-his-eyes at Michael Waltrip and trying to keep order on Inside Winston Cup Racing on SpeedVision. They watched him work on TBS, TNT and NBC in the play-by-play role crafting lasting memories with Benny Parsons. After a leg injury in a hockey game, Bestwick was suddenly moved back down to pit road for the final two seasons of the old NASCAR TV contract.

The first season on ESPN found him in exactly the same position, even as the network struggled to find credible hosts for the studio and infield programs. In a way, things have come full circle for Bestwick as he now leads a re-energized TV crew into one of the most high-profile sports on the ESPN family of networks.

Should ESPN's 2008 Sprint Cup effort be a huge hit, look for the mainstream media to once again speak with Punch, Jarrett and Petree about "their season." My guess is that Allen Bestwick will be long gone from the spotlight and looking back at what may well become his most memorable year in television.

The Daly Planet welcomes comments from readers. Simply click on the COMMENTS button below and follow the easy instructions. The rules for posting are located on the right side of the main page. Thanks for taking the time to stop by and leave your TV-related opinion.
Posted by Daly Planet Editor at 11:30 PM 52 comments:

Krista Voda leads the NCTS gang from SPEED into the always exciting short-track action from O'Reill Raceway Park. Located on the other side of the Indy area, this historic bullring has been the scene of some tough and hard racing. Exactly the kind that the NCTS likes a lot.

Voda handles the pre-race show at 7:30PM with Ray Dunlap and Adam Alexander as her reporters. Rick Allen, Phil Parsons and Michael Waltrip are up next at 8PM to call the racing action.

This post will serve to host your comments about the TV coverage of the NCTS on SPEED from ORP. To add your opinion, just click on the COMMENTS button below and follow the easy instructions. The rules for posting are located on the right side of the main page. Thanks for stopping by.
Posted by Daly Planet Editor at 7:28 PM 15 comments: