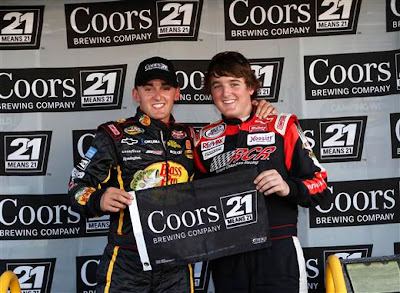 After a big Friday and Saturday of racing, the weekend winds down with the Camping World Truck Series race at Iowa Speedway.

Krista Voda opens with The Setup pre-race show at 1:30PM. Ray Dunlap will be on pit road for this show, then he will be joined by Voda for the race.

Upstairs will be Rick Allen, Michael Waltrip and Phil Parsons. Allen and Waltrip called the ARCA race on Friday night, while Parsons worked the Sprint Cup Series race for TNT from Chicagoland.

This track makes for good truck racing, it's fast and has multiple grooves. As the field strings out, the backmarkers also come into play in terms of lap traffic.

SPEED should present the solid type of no frills racing presentation that has worked for the trucks for several years now. Allen provides the excitement, Parsons provides the analysis and Waltrip provides the entertainment.

This post will serve to host your comments about the SPEED coverage of the Camping World Trucks from Iowa Speedway. To add your comments, just click on the comments button below. This is a family-friendly website, please keep that in mind when posting.

Thanks for taking the time to stop by The Daly Planet.
Posted by Daly Planet Editor at 12:44 PM 59 comments:

Your Turn: Sprint Cup Series From Chicagoland On TNT 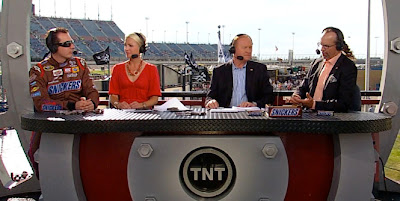 The final race on TNT proved to be a challenge in more ways than one. Other than the National Anthem, excitement was in rather short supply on the track after a series of long green flag runs.

Chicagoland features high speeds but little passing. That was on the menu again Saturday night. Lindsay Czarniak started the TNT coverage from the infield with Kyle Petty and Larry McReynolds.

Kyle Busch was the guest and Allan Kulwicki was the featured NASCAR personality on the Pride of NASCAR. The track description was done during the Wally's World feature. McReynolds and Petty talked about various issues, mostly supporting NASCAR's policies.

Adam Alexander called the race with Petty and Wally Dallenbach Jr. in the TV booth. It was quickly clear that Alexander would be having a long night. In this race, the cameras continually left the best action and moved to the leaders of the race. In addition, the normal TNT commercial schedule made it rough on viewers.

As the race continued, the commercial breaks fell in the worst possible manner for TNT. Time after time, viewers missed important events and incidents while the network was in commercial.

Petty and Dallenbach talked about everything under the sun. Larry McReynolds showed all kind of things on the cutaway car and the pit reporters followed the stories. It was just a single-file aero race.

This post will give you an opportunity to offer your opinion on this race and the TNT coverage. There will be another post up during the week asking your overall opinion of the six TNT races.

To add your comments on this race, just click on the comments button below. This is a family-friendly website, please keep that in mind when posting. Thanks for taking the time to stop by The Daly Planet.
Posted by Daly Planet Editor at 12:15 AM 50 comments: