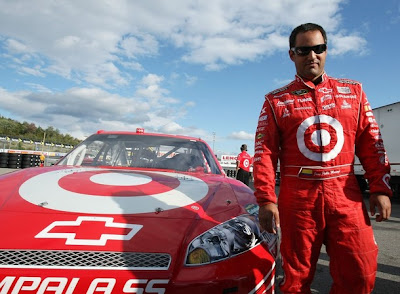 Juan Pablo Montoya is on the pole and that is a sign that things are going to be very different today in New Hampshire. There is a driver working for free, several teams in full meltdown mode and the oldest Chase competitor just extended his contract to drive in the series.

Into this fun walks the NASCAR on ESPN TV team for the third consecutive year. This group will have the ABC television network as a pathway to the fans for the rest of the season. All ten Chase races are on free over-the-air TV.

Allen Bestwick will open the show at 1PM with NASCAR Countdown. This is a one hour pre-race show from the Infield Pit Studio. Rusty Wallace and Brad Daugherty will be alongside of Bestwick for both the pre-race and for comments during the live telecast. Tim Brewer will be on site with the Tech Garage.

Last season' pre-race shows during the Chase proved to be tilted toward the Chase drivers despite what else was happening in the sport. There are lots of stories across the board to choose from, but expect a full dose of Chase-mania from the ESPN gang today.

Wallace continues to be outspoken and that has been a positive point for these telecasts. Love him or hate him, Wallace draws the fans to hear what he will say next. Saturday, Jeff Gluck from scenedaily.com offered a column critical of current NASCAR team owners like Wallace and Daugherty being on TV. It should be interesting to see if Rusty chooses to respond.

Bestwick will transition to Jerry Punch prior to the 2:16PM green flag. Punch will be joined by Dale Jarrett and Andy Petree to call the race. It's no secret that things are not rosy in the TV booth and this is the type of track that requires a lot of work from the announcers.

Flat and sometimes boring, it is going to take effort to continue to comb through the field for racing. The pit reporters are also going to have to push to get the stories as passing on pit road under caution flag pit stops is going to set-up the new doublefile restarts.

Tight camera shots and in-car camera views don't work in Loudon. The track is two high speed drag races with passing going into the corners. Seeing the field come down the front and back straights is going to be key to covering who pulls out to pass. We saw it in the Mod and truck races time-and-time again.

This post will serve to host your comments about the ABC coverage of the Sprint Cup Series race from the New Hampshire Motor Speedway. To add your TV-related comment, just click on the comments button below. Comments may be moderated prior to posting.

Thanks again for taking the time to stop by and talk NASCAR on TV.
Posted by Daly Planet Editor at 11:45 AM 457 comments: