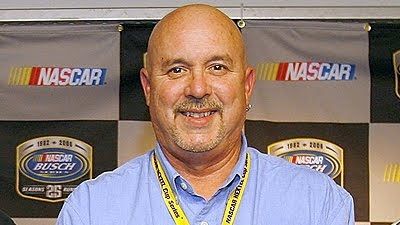 Here are the Wednesday TV/media updates posted as they come in:

SPEED has adjusted the Monday line-up again for next week. Here is the program schedule for May 17:

What this means is Spencer's show What's the Deal is gone and also the Monday version of NASCAR in a Hurry seems to be a casualty of the changes at SPEED. More info when it comes out.

Meanwhile, we have reached out to NASCAR.com about their choice of a single raw camera feed and the microphone on the stage as the Hall of Fame opening ceremony webcast on Tuesday morning. NASCAR.com and SPEED are partners. SPEED was on site and produced a full three hour outstanding TV program. No response yet from Turner, the company that owns and operates the NASCAR.com website.

Reminder that tonight's NASCAR Now on ESPN2 at 5PM has Dr. Jerry Punch's sit down with Larry Pearson, who is pictured above. Discussion centers on Pearson's accident in Bristol in the charity race and the challenges he has faced since that time. Punch is the perfect person to deal with this subject. Mike Massaro is hosting.

Update: ESPN also reminds me Kyle Petty will be a NASCAR Now Wednesday guest on the anniversary of his son's tragic death. Kyle's charity motorcycle ride ended on Sunday as well.

We have also confirmed that Race Hub will be expanding to one hour in length for next week, but SPEED has not yet informed us if this will be permanent. Expanding at least the Monday show to one hour would be a great idea. It has been apparent since February that thirty minutes is not enough time for all the information, interviews and guests that SPEED can get from their new studio that is right in NASCAR's backyard.

More items will be added to this post as the day rolls on!

To leave your comment on these topic, just click the comment button below. Thanks for taking the time to stop by The Daly Planet.
Posted by Daly Planet Editor at 12:30 PM 16 comments: